Robert Einhorn says President Obama’s flexibility on Iran will be affected by the Syria chemical weapons disarmament plan, and the US and Iran should adopt a more informal approach to nuclear negotiations. 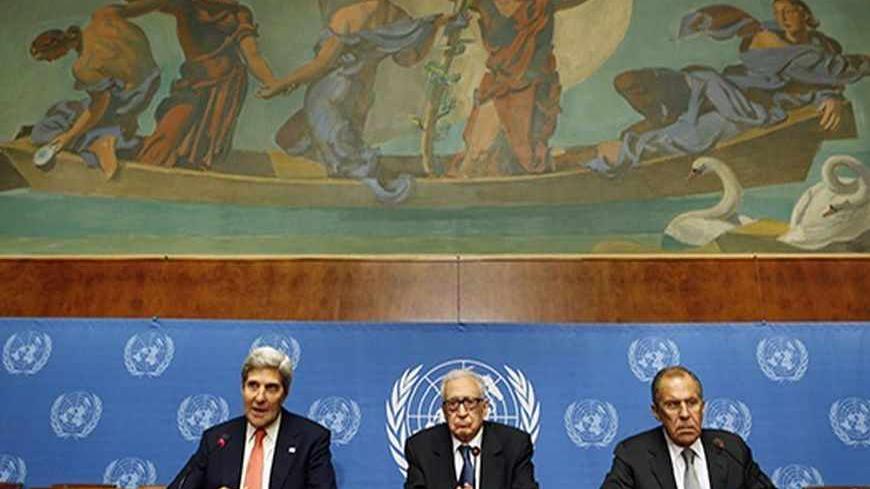 A former senior US nuclear negotiator, Robert Einhorn, said Thursday [Sept. 12] that the fate of the Russian proposal to remove Syria’s chemical weapons will have a strong impact on whether the United States and Iran can make progress toward a nuclear accord.

Speaking at a symposium on Iran at the Atlantic Council, a Washington think tank, Einhorn, who left the Obama administration in May after more than four years of participating in largely unsuccessful talks with Iran, said that “if the Syrians in the end show bad faith ... [or] the Russians are unable to deliver” within three or four months on the chemical disarmament plan, the implications for an Iran nuclear deal would be “very, very negative.”

Conversely, Einhorn said, a successful diplomatic outcome to the chemical weapons crisis in Syria “could have very positive implications” on Iran talks and make it easier for the Obama administration “to take a risk” in making concessions to Tehran.

Einhorn spoke as Secretary of State John Kerry arrived in Geneva for detailed technical talks with Russian officials, and Syrian President Bashar al-Assad sent a letter to the United Nations applying to join the Chemical Weapons Convention, which bars the production, possession or use of such arms. Both Kerry and President Obama have warned that Syrian acquiescence to the Russian plan cannot be a mere “delaying tactic,” even as the new diplomatic flurry provided an escape hatch for the US administration from what appeared to be a losing vote in the US Congress to authorize the use of force against the Syrian regime.

Iran analysts have sought to separate the issues of the Syrian use of chemical weapons and the Iranian nuclear program, but the two have merged in the minds of many observers who fear that Obama’s zig-zags over Syria have projected an image of indecision and weakness. However, the burden is also on Russia and Iran to persuade Assad to verifiably surrender his chemical weapons arsenal.

Iran’s new president, Hassan Rouhani, condemned the use of chemical weapons on Syrian civilians on Aug. 21 without ascribing blame to the Syrian government. Iranian officials have been very supportive of a diplomatic resolution to the crisis. Iranian Foreign Minister Mohammad Javad Zarif told Iran’s state-owned English language channel, Press TV, on Wednesday [Sept. 11] that “force has lost its utility in international relations” and an American strike on Syria would hurt US interests and make a resolution of the more than two-year conflict even harder to achieve.

Rouhani, a former nuclear negotiator, has tasked Zarif and the Iranian Foreign Ministry with supervising nuclear negotiations, taking authority out of the Iranian National Security Council. Rouhani campaigned on a promise of achieving sanctions relief for the Iranian people, and his surprise election has raised expectations in Iran for progress on the nuclear issue, a prerequisite for lifting sanctions.

Einhorn, who endured years of nuclear talks that went nowhere — he said an Iranian proposal presented at the last session in Almaty, Kazakhstan, in April was “a joke” — suggested a new approach by both the United States and Iran to the negotiations, which are expected to resume following the UN General Assembly meeting in New York later this month.

Instead of presenting detailed, multi-point plans that are “chiseled in stone,” Einhorn said “the most productive way” would be for the United States and Iran to “sit down and explore what’s possible ... a very frank give-and-take about what each side is really seeking in these negotiations.” Only then should formal proposals be drafted and presented to the other permanent members of the UN Security Council plus Germany for their approval.

Rouhani has promised greater transparency for the Iranian nuclear program, but said Iran will not give up its rights under the Nuclear Non-Proliferation Treaty (NPT) to the peaceful use of nuclear energy — code for continuing to enrich uranium for nuclear fuel.

A “win-win approach” — in the language of Rouhani’s Twitter feed — might translate into Iranian implementation of the additional protocol of the NPT, which permits intrusive inspections by the International Atomic Energy Agency with little or no notice, and a willingness to cap the level of uranium enrichment and the number of centrifuges installed at three Iranian enrichment facilities.

Einhorn said more transparency would not be sufficient and that Iran would have to accept significant restrictions on enrichment capacity — the number and type of centrifuges — as well as on stockpiles of enriched uranium to get a deal.

“I don’t think the Obama administration has taken a decision on whether Iran can have enrichment,” Einhorn added.

Einhorn, who interacted with Zarif when Einhorn was out of government and Zarif was Iran’s ambassador to the United Nations, praised the US-educated foreign minister as “one of the top diplomats I’ve ever seen.” Einhorn added that Zarif and Rouhani had mounted “a very active and skillful public diplomacy campaign” in recent weeks to prepare the ground for negotiations, including wishing Jews a “Happy Rosh Hashana” and condemning the use of chemical weapons “more vociferously” than the Russians. “They [the Iranians] want to show the world this new team is more flexible and reasonable [so that the world will] give Iran the benefit of the doubt ... and avoid further sanctions,” Einhorn said.

Kenneth Katzman, an expert on sanctions at the Congressional Research Service, said that the Obama administration has considerable flexibility and discretion in suspending and implementing sanctions to relieve the pressure on the Iranian economy in the event the nuclear talks make progress.

Haleh Esfandiari, an expert on Iran and director of the Middle East Program at the Woodrow Wilson International Center for Scholars, who also spoke at the panel on Thursday, said that with “Rouhani, we have a return to normalcy” in Iran after eight years of Mahmoud Ahmadinejad’s dysfunctional administration, but “we can’t expect him [Rouhani] to perform miracles.”

Barbara Slavin is Washington correspondent for Al-Monitor and a senior fellow at the Atlantic Council where she focuses on Iran. She moderated the Sept. 12 panel. On Twitter: @BarbaraSlavin1