Could Netanyahu's Offensive Against Iran Backfire?

Prime Minister Benjamin Netanyahu demands for Iran to be tested by its deeds, not words, but will Israel follow the same example when negotiating with the Palestinians? 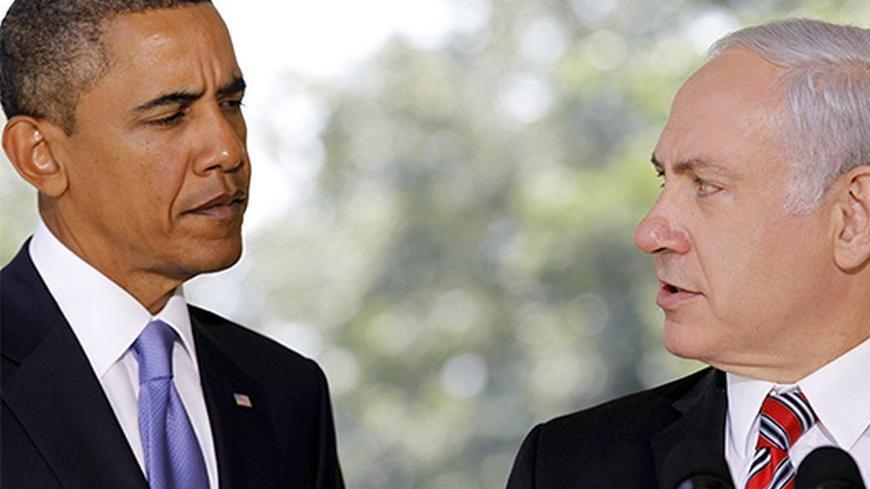 The main message in the speech delivered by Prime Minister Benjamin Netanyahu at the UN General Assembly on Oct. 1 was that there is one difference between the new president of Iran and his predecessor — Hassan Rouhani is a wolf in sheep’s clothing, while Mahmoud Ahmadinejad was a wolf in wolf’s clothing. The only change in Iranian policy — according to Netanyahu — is, therefore, the exchange of inflammatory discourse for sweet talk. If we extend the metaphor a bit, we can now say that Netanyahu is a sheep in wolf’s clothing. The “wolf” part of the speech, in which Netanyahu threatened that if worst comes to worst, Israel will operate alone, sounded nothing more than the roar of a mouse.

Behind Netanyahu’s fiery tone we observe clear signs that he is adapting his positions to the new dialogue atmosphere between Washington and Tehran. The most blatant testimony of this is the way Netanyahu has realigned himself with US President Barack Obama on the US and universal fundamental distinction between the issue of Iran striving to equip itself with the nuclear bomb and Iran’s right to establish nuclear facilities for civilian needs.

Until now, all of the prime minister’s previous public speeches expressed sweeping opposition to any word combination involving “nuclear” and “Iran.” That could be interpreted as demanding the international community to prevent Tehran from equipping itself with nuclear energy for peaceful purposes. Also, contrary to Netanyahu’s recurring claim that sanctions are not having an effect on Iran, Netanyahu admitted this time that sanctions have been found to be most effective.

Netanyahu threatened that if it becomes clear on Judgment Day that Iran’s nuclear program reached the point of no return, then Israel will operate alone. But how much is this threat worth? First, the questions for Iran’s "practical test" will be formulated by a P5+1 negotiating team — and not Netanyahu. Second, the International Atomic Energy Agency (IAEA) inspectors will be the ones to determine whether Iran passes the test — and not Netanyahu. Third, the United States and the UN Security Council will decide whether the talks were successful or led to a dead end. Not Netanyahu.

And if the negotiations will lead to an agreement that is acceptable to the international community, Israel will not be able to wage war on Iran against the will of the entire world. It is very doubtful whether Netanyahu will succeed in recruiting a majority in Israel’s diplomatic security cabinet for an assault on Iran, against the stance of the US patron. He will find it very hard to find supporters in the highest security echelons for an independent Israeli attack of nuclear facilities. Public opinion in Israel — like in the United States — clearly prefers to exhaust diplomatic efforts and sanctions, before adopting the military option.

Even if it emerges that Rouhani is, indeed, a cunning wolf in sheep’s clothing, the United States will be the country to lead a military campaign against Iran, not Israel. Common sense would dictate that, just as in the first Gulf War, Israel would be asked to sit up in the peanut gallery so as not to allow the Iranians to depict the war as a Judeo-Christian crusade against an Islamic country.

High-ranking Western diplomats with whom I spoke this week said that Netanyahu’s attempt to flex his muscles vis-a-vis Iran is viewed, at best, as a pathetic performance, and at worst as a flagrant attempt to sabotage diplomatic efforts and the success of the sanctions policy. (According to data received by the West, Iran has barely one month’s supply of cancer drugs left in its repository.) There is definitely room for concern expressed by Israeli officials that if the sanctions against Iran will emerge as an effective tool for changing the policy of a recalcitrant country in the Middle East, this could lead to pressures imposed by the international community on other recalcitrant countries in the region — if it becomes clear that they, too, restrict themselves to singing the songs that Western ears like to hear.

Netanyahu is correct in saying that Iran should be judged by its actions. Not by the words or the tunes it sings. But Netanyahu knows better than anyone else how political life-and-death depends on the tongue. In these very days, Netanyahu is forced to deal with the extremists' camp in his party and in the coalition, only because of several peace speeches. Meanwhile, the important facts on the ground are being set by the digging of foundations for new settler houses in the occupied territories. Rouhani’s new style has aroused scathing criticism against him, on the part of the Islamic Revolutionary Guard Corps and Iranian media, even before he has made one practical change on the ground. His rivals in the ultraconservative camp are waiting impatiently for the failure of the diplomatic negotiations to portray him as a lackey of the West.

For many years, Ahmadinejad — the wolf in wolf’s clothing — provided the answer to Israel’s leaders regarding the following tough question: Why do they fight the Iranian nuclear program, but acquiesce to the Pakistani bomb? The answer we got, over and over, was that “Iran is the only country that threatens to destroy us, and denies the Holocaust.” What will they say now, when the heads of Iran declare that they have no intentions of attacking Israel, and they condemn the murder of the Jews by the Nazis?

In other words, Iran’s words have strategic meaning so long as they convey violent messages, but as soon as the threatening tone disappears, do their words have no more value?

Iranian incitement against the “big Satan” (the United States) and the “little Satan” (Israel) gave these two partners justification to absolve Jerusalem of membership in the Treaty on the Non-Proliferation of Nuclear Weapons, and it is right to prevent the entrance of IAEA inspectors to its nuclear facilities.

Western sources, which are close to the ongoing contacts with the Iranian delegation to the UN General Assembly in New York, told me this week that due to Netanyahu’s "speech of preconditions," high-level Iranians told them that as part and parcel of the negotiations with them, they will demand to completely demilitarize the entire Middle East from weapons of mass destruction. Without any exception.