While many Western-oriented Iranians mocked Israeli Prime Minister Benjamin Netanyahu's comments about Iranians not having access to blue jeans, others seemed most angered by his threats to bomb Iran and push for more sanctions. 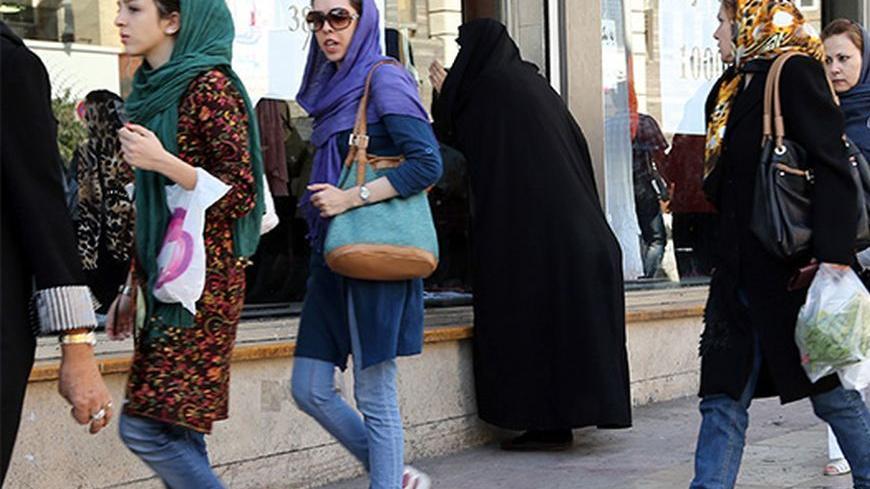 A correspondent in Tehran
October 8, 2013

Compared to four years ago, satellite jamming by the Iranian government has decreased in volume. This is perhaps one reason why millions of Iranians were able to watch Benjamin Netanyahu’s interview with BBC Persian on Saturday evening just before going to bed.

In the past few days, tens of thousands of internet users reacted, mostly in a mocking tone, to what Netanyahu said in his interview. The Israeli prime minister, who noted the absence of democracy in Iran, had said, "I think if the Iranian people had their way, they'd be wearing blue jeans, they'd have Western music, they'd have free elections.”

Iranians who were critical of Netanyahu, most of them westernized, denim-wearing youth who are supporters of the Green Movement, responded to the leader of Israel with a cynical motto which was repeatedly shared in cyberspace: “You saw the nuclear bomb, but you did not see our pants.”

Hanieh, 22, coming out of Tehran University of Art campus near the Valiasr junction, said, “All we needed was this rascal making decisions for us! For two years he used the Israel lobby in the United States and maliciously interfered until Europe and the United States imposed sanctions on Iran. Now suddenly you who were pushing for sanctions, which make the Iranian people poor, are worried about us? I actually think that the expression he used to describe Rouhani, 'a wolf in sheep’s clothing,' fits him much better. He sits in front of the TV camera and smiles at the Iranian people and then goes and does his best to destroy their country’s economy and deprive them of their basic needs. He thinks we are stupid. We will never choose him over Rouhani.”

Aside from its strong support for tougher sanctions against Iran, Israel has threatened Iran with unilateral military action, especially between the autumn of 2011 and summer of 2012.

According to a political analyst in Tehran, who wished to remain anonymous, “The reason why Netanyahu is not popular with the young people and pro-democracy activists inside Iran is that never before was their country threatened with war as often as it was when Netanyahu was in office. This is why as soon as he made a faux pas, people used it to attack him and show their hatred of him."

Many young people in Iran follow politics on a daily basis from reputable sites such as BBC Persian and Radio Farda, and they know how important the role of Israel was in sanctions imposed on Iran during the past two years. Naturally, Netanyahu is not the world’s most popular political leader as far as the Iranians are concerned.

According to this political analyst, “Netanyahu is wrong if he thinks that the Iranian people are looking for a regime change. It is not like that. The Green Movement, which is the most progressive movement in Iran, has serious demands and is looking for serious reform but it is not looking for a new revolution in Iran. I think Mr. Netanyahu has been largely unsuccessful in understanding the political demands of the Iranian people in the past four years.”

He continued, “The other issue is that Netanyahu has lost his diplomatic manners. He constantly mentions that he has read Rouhani’s book or compares him to a 'wolf in sheep’s clothing.' When you constantly repeat yourself, you start sounding like a babbler who has stayed frozen in time and is acting like a defiant child. I am not saying that this defiance is not in the best interest of the Israeli people, it probably is, however, it has turned Netanyahu into a silly character. He mentioned himself in the interview that he is turning 64 this month. Well, should a 63-year-old man use drawings in his UN speech?” He was referring to Netanyahu’s UN speech in 2012, in which he used a marker to show the world leaders Iran’s nuclear red line.

Netanyahu’s misunderstanding of Iranian domestic culture doesn't mean that he did not make valid points in his speech and there were some Iranians who mostly agreed with his comments.

Kamran, a translator and owner of a publishing house says, “I don’t think we should judge his character. Much of what he said, he needed to say. I don’t think he is all that wrong regarding the nuclear threat. He did say some irrelevant things and exaggerated a lot, but then that is politics. Israelis know that Iran cannot use a nuclear bomb under any circumstances." Regarding Netanyahu's acknowledging himself that Israel has not joined the Non-Proliferation Treaty, he said, “This is Israel acting like a bully.”

Some even supported Netanyahu’s comments. Mohammad, a high-ranking employee of a private bank in Tehran said, “I don’t know why this poor fellow is being mocked like this. He had many important and accurate points and now a bunch of people are ridiculously, and superficially, only focusing on that one little thing that he said about wearing jeans.” He added, “If the Islamic Republic makes the atom bomb, it will crush the people. They [the government of Iran] are capable of anything.”

During the interview, the prime minister of Israel said, “If they get nuclear weapons, this brutal regime will be immortal, like North Korea."

Mahmoud, a 55-year-old bus driver who was also wearing a pair of jeans, had a unique criticism of Netanyahu: “I did not understand what he was saying. His facial expressions, and the way he talked, were like that of a crazy person. It was so ridiculous. He was acting like a standup comedian who is trying to be serious."

One interesting element is that the Iranian newspapers, both Reformist as well as conservative, paid little attention to this interview. A senior journalist in Tehran told Al-Monitor, “Reformist newspapers have difficulty addressing the issue of the relationship between Iran and Israel. They have clear red lines. A newspaper such as Kayhan is probably silent since many of the opponents of the government are harshly criticizing Netanyahu in cyberspace. Hossein Shariatmadari, the editor of Kayhan, does not like to be in agreement with the members of the opposition. This is why Kayhan only published a short report on this interview."

Editors Note: All names in the above story were changed to protect the anonymity of the interviewees.