Security is at the top of Iraqi Prime Minister Nouri al-Maliki’s visit to Washington, but he may also consider a US-Iran rapprochement as a means to strengthen his chances for a third term. 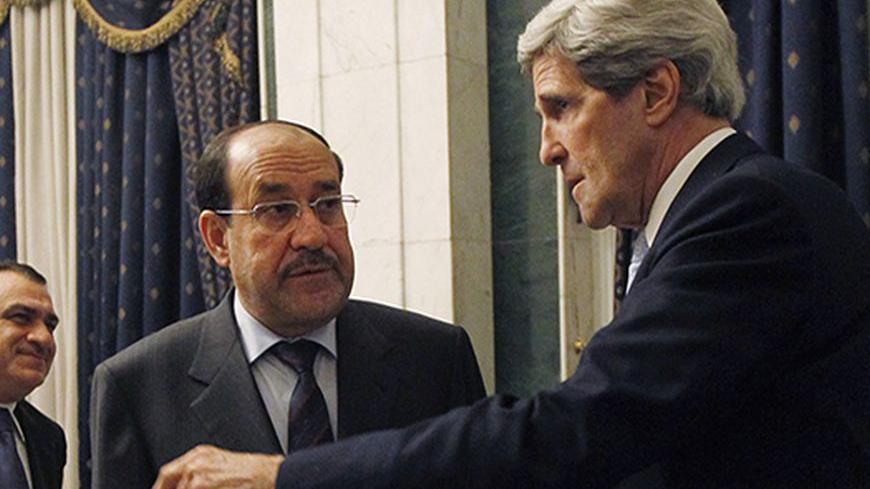 Many internal and regional issues are on the agenda of Iraqi Prime Minister Nouri al-Maliki’s Nov. 1 visit to Washington, where he will meet with senior US officials, including President Barack Obama.

There has been a lot of speculation about the goals of the visit, which comes at a very critical time for Iraq. The political crisis is escalating and the security situation is collapsing. The visit also comes at a time when the region is filled with complications as it prepares for the Geneva II conference to discuss the Syrian crisis.

On Oct. 29, Iraqi ambassador to Washington Lukman Faily denied that Maliki’s visit was for Iraqi political issues, especially with the growing crisis over the Iraqi election law. Faily asserted that the visit was scheduled months ago.

Reality has placed the Iraqi political crisis at the heart of the Washington talks. In recent weeks, US Vice President Joe Biden has held a series of contacts with a number of Iraqi politicians, the last of which was with President of the Iraqi Kurdistan Region Massoud Barzani on Oct. 28.

The US administration has expressed concern about the escalating violence in Iraq and urged political parties to end their differences.

While departing Baghdad, Maliki said that his US visit will be only about activating the US-Iraq Strategic Framework Agreement and tackling the terrorism issue, which he said would be “hot.”

Abbas al-Bayati, a leading figure in al-Dawa party and one of Maliki’s associates, denied that Maliki would discuss internal Iraqi political difference during his Washington visit. Bayati told Al-Monitor, “The visit will discuss the regional situation, the Syrian crisis, and ways to combat terrorism and extremist organizations.”

He added, “The armament file will be discussed with the American side. Iraq has signed important arms contracts with Washington. We will request that the arming process be sped up and that the Iraqi security forces be supported.” Bayati focused on the arming issue by pointing that a high-ranking military delegation is accompanying Maliki to Washington.

However, some are speculating that the visit has additional goals, such as Maliki securing US support for a third term after the 2014 Iraqi elections and getting US support to face al-Qaeda’s growing capabilities.

At the regional level, Iraq is expected to ask to play a pivotal role in the Geneva II conference, especially after Maliki put forth an eight-point initiative on the Syrian crisis on Sept. 4.

Maliki is searching for a regional role despite his bitter internal struggle (more and more are opposing Maliki’s policies and Iraq’s security is collapsing) because Iraq’s situation is linked to pivotal developments in the Middle East, especially regarding Syria, where the Islamic State in Iraq and al-Sham (ISIS) is controlling more and more Syrian towns near the Iraqi border and turning them into “safe havens” for ISIS elements who cross the Iraq-Syria border at will.

But despite all these major issues, the visit still has a personal aspect. Maliki’s wishes to bring the United States and Iran closer, probably so that he can get a third term by reproducing the 2010 scenario, especially since some Iraqis think that international and regional differences on the Syrian crisis present Iraq with an opportunity to play a role because Maliki has good relations with both the US and Iran.

Perhaps it is this Iraqi role that some domestic anti-Maliki political forces fear. Those forces think that Iraq has paid a heavy price for the 2010 deal, which deepened internal division and ended the national partnership government. Maliki himself contributed in complicating the situation by a series of crises after he visited Washington in December 2011. The most prominent of those crises was the opening of Vice President Tareq al-Hashemi’s legal file. He was sentenced to death. Hashemi’s case and similar cases against a number of Sunni politicians affected how Iraqi Sunnis view the government. That later led to the eruption of protests in al-Anbar near the end of 2012 and to the escalation of the conflict between Baghdad and the Kurdistan region into an armed clash in the middle of 2012.

In theory, Maliki is going to Washington to discuss critical files and several demands. Three days may not be enough to discuss all those subjects. Civil state supporters in Iraq are wondering not “What will Maliki ask from Washington?” but rather, “What Washington will ask from Maliki?” and not only regarding the growing political and security crises or the ambiguous relationship of Iraq with the Syrian file, but also about basic rights and freedoms for Iraqis. There has been great pressure and continuous attempts to restrict those rights.