In an exclusive interview with Al-Monitor's Andrew Parasiliti, Ali Aldabbagh, spokesman for the government of Iraq, said that Vice President Tareq al-Hashemi is "connected directly to groups who ... performed terrorism," but could appeal his death sentence with a "full guarantee of protection" if he returned to Iraq. 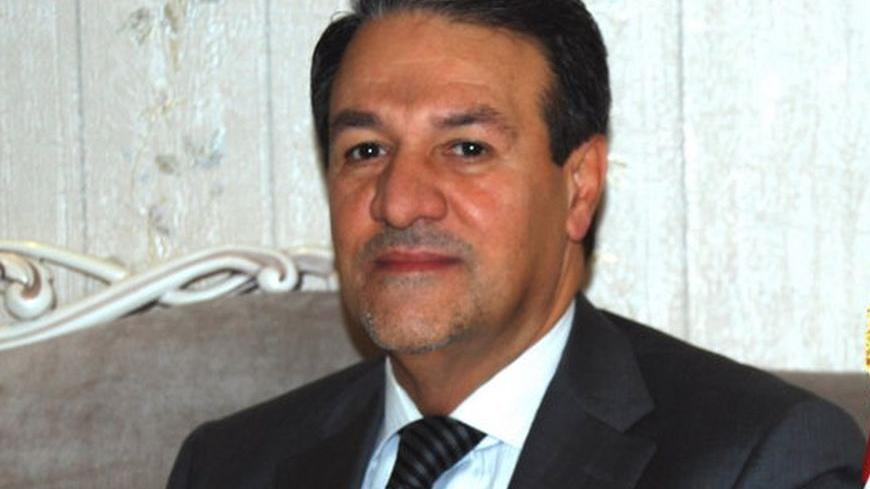 In an exclusive interview with Al-Monitor CEO & Editor-at-Large Andrew Parasiliti, Dr. Ali Aldabbagh, spokesman for the government of Iraq and a close adviser to Iraqi Prime Minister Nouri al-Maliki, said that Iraqi Vice President Tareq al-Hashemi is "connected directly to groups who killed, assassinated and performed terrorism." Aldabbagh added, however, that there is an option for al-Hashemi to appeal his death sentence with a "full guarantee of protection" if he returned to Iraq. With regard to al-Hashemi, Aldabbagh warned Turkey not to act as a "lawyer for others."

[From Turkey, al-Hashemi summarily dismissed the Baghdad court that sentenced him, saying: "The verdict is unjust, politicized, illegitimate and I will not recognize it. It means nothing to me."]

In the interview, conducted by e-mail, Aldabbagh also described what he calls a "clear and visible ... sectarian conflict in the region" and warned of the threat of "extremist Islam" to Iraq and the region as a result of the conflict in Syria.

Aldabbagh said that Iraq is "fully neutral and ready to help and mediate" in Syria, supports a "democratic regime" acceptable to all parties and is "ready to be part of international efforts to stop any arms to Syria."

He added that it "is our commitment not to allow the flow of arms or fighters to both parties in Syria" and that Baghdad has informed Iran that "Iraq will never accept to use its air space to do so."

Aldabbagh discussed the "fragile political situation" in Iraq, especially between Baghdad and the Kurdistan Regional Government, and blamed Turkish Prime Minister Recep Tayyip Erdogan directly for the deterioration in Iraq-Turkey relations. He added, however, that Iraq is "ready to take any step to maintain good relations with such [an] important neighbor, even though we have different views for Syria."

Al-Monitor:  The government of Iraq has sentenced Vice President Tariq al-Hashemi to death by hanging for his involvement in death squads. Could you please comment on the verdict, and Al-Hashemi’s calls to oppose Prime Minister Maliki?

Aldabbagh:  Mr. al-Hashemi is benefiting from the inconsistent political situation in Iraq to have some support as well as the non-smooth relations with Turkey. Otherwise, he will never have someone to defend him, because there are more than 100 crimes filed against him. He is connected directly to groups who killed, assassinated and performed terrorism. There are many witnesses who gave the testimony to nine high judges well known for their good reputation and performance, [who] finally found him guilty.

He now has a chance to repeat the [trial] when he presents himself to justice. Assurances of fair treatment and judgment could be worked out to have him appeal or request [a retrial] with a full guarantee of protection for him.

Turkey should not involve [itself] with this issue. They choose to defend a guilty person. There was a red mark from Interpol to bring Hashemi to justice; they chose not to accept it. This might complicate the situation more with them especially when they meet him officially. This is an internal issue related fully to [judicial] authority, and the government never interferes with their business, so Turkey should not perform as a lawyer for others.

Al-Monitor:  Baghdad has threatened to cut the KRG share of the Iraqi budget in the present dispute over oil contracts and exports from the Kurdistan Region. What is the government of Iraq’s plan to resolve differences over oil contracts and the budget? Or do you see the situation getting worse before it gets better? What are the elements of a compromise?

Aldabbagh:  The federal government had paid last year $540 million to the KRG as an advance payment to be settled on providing the actual cost of the oil companies operating in Kurdistan; also, the KRG had confirmed through many letters that they had produced huge quantities of oil which is not delivered to the federal government and not refined, so ... more than $8 billion of income is not audited and they refuse to settle [it]. Furthermore, the KRG had committed to pump 175,000 barrels daily of crude oil through the government's existing pipeline. They had stopped pumping since April, which create extra losses as well as reduced the national revenue — that is why the federal government is asking to talk about these issues through a committee in Baghdad including two KRG ministers. They declined to attend. We [are] still waiting [for] them to come and settle these issues; otherwise, a deduction [is] most likely to be on the table. I think that this needs to be solved politically, [and] then technical and financial issues could be solved easily.

Al-Monitor:  There are increased tensions between Baghdad and Erbil in the disputed territories. What are Baghdad's plans for addressing this issue, particularly in Ninewa, where oil contracts also have been signed?

Aldabbagh:  Baghdad had sent the acting defense minister to find means to avoid the tension, and also will do all [that is] needful to impose the rule of law. The disputed territories should remain in the hand of the federal government until it is solved. There is growing tension in Mosul which needs to fixed wisely.

Al-Monitor:  What is Baghdad’s view of Syria and the most effective way to end the violence there?

Aldabbagh:  We strongly believe that those who push for a military solution are causing [the loss of] the opportunity [for a] peaceful end for the brutal al-Assad regime. We are fully neutral and ready to help and mediate through ideas [that have] been presented through many conferences, and could represent an initiative if the major players [are] satisfied that military action is [in] a deadlock. Syria is a multiethnic and religion country which needs a democratic regime accepted by all components without imposing a single color on them. Syria is influencing the whole region.

Al-Monitor:  The US has asked Iraq to inspect Iranian planes flying to Syria to prevent arms and material from reaching the Syrian government. Is this a reasonable request? Will the government of Iraq consider doing so?

Aldabbagh:  The US never asked [us] to do so, but it is our commitment not to allow the flow of arms or fighters to both parties in Syria. We had informed the Iranians that Iraq will never [allow the] use [of] its airspace to do so. Iraq is ready to be part of international efforts to stop any arms to Syria. We protect our borders from [allowing the flow of] any equipment or fighters to or from Syria. Iraq is totally committed to these principles. The US had satisfied with Iraq measures toward Syria.

Al-Monitor:  How do you assess Iraq-Iran relations? Does your relationship with Iran complicate your ties with the United States, as in the case of Syria?

Aldabbagh:  Never, on the contrary. The US understands that Iraq should maintain good relations with Iran, as we [have] been mediating between them. Even with the Syrians, we differ on some issues with US, while we agree and have the same ideas on some Syrian aspects. Such differences never affect our relations — the US respects Iraq sovergnity in building relations with others.

Iraqi relations with Iran are good, as we have common interests and a long border. We will never be the shadow of the Iranians in their problems or difficulties with the US or other Arab countries. We do need Iran not to interfere in our internal issues.

We had suffered through ... history until now from the disputes and the struggle of Persians with other nations.

It is [in] the interest of the region to reduce the causes of conflicts in the region without entering into alliances which could create unnecessary polarism.

Al-Monitor:  Iraq continues to suffer from terrorism. Is the spike in terrorism related to the withdrawal of US forces from Iraq?

Aldabbagh:  Iraq was the actual battlefield between the US and al-Qaeda ... We are [still] under [threat from] al-Qaeda ... and [this] might ... escalate, depending [on] how ... the future in Syria [will be]. The terrorist group's agenda had changed from fighting the US to fighting Iraqis, especially the Shia in Iraq. We don't have the choice ... to [only] protect our people, and those who believe that they could be a friend of al-Qaeda ... are wrong. Bashar Alasd is a living example.

Al-Monitor:  Do you feel that there is a sectarian conflict in the region? How is Iraq affected?

Aldabbagh:  It is clear and visible that there is a sectarian conflict in the region, and some countries want to ignite it and create a fire which will extend and burn everyone. The sectarian struggle is the worst, and Europe had suffered a lot [from] it. The regional agenda against al-Assad can be understood when we look to his connection with Iran, but such a fire will be out of control. Syria has a very important location in the region and will be much worse than Afghanistan if unknown or extremist Islamists come to power through a non-democratic way. The US had closed [its] eyes on the possibility of having a new copy of al-Qaeda in a volatile region.

Al-Monitor:  Iraq- Turkey relations are at a low point. Why has the situation deteriorated so badly? Is Baghdad taking any steps to improve relations? What would you consider a positive sign from Turkey?

Aldabbagh:  We never like our relations with Turkey to reach to this level. Turkey should be blamed for this. Turkey and Mr. Erdogan treat Iraq as component [parts] and not as a sovereign state, unlike the early years of good relations which made the trade volume ... increase from $3 billion to more than $13 billion. [These relations now] face ... a real threat; we haven't taken any steps to reduce or to create difficulties [for] them yet, but many provinces [are] starting to rethink ... having Turkish companies operating.

We are ready to take any step to maintain good relations with such [an] important neighbor, even though we have different views for Syria. Turkey and its leaders should understand that good political relations will be better for their people — such understanding is now widely promoted among all Turkish business activities.

Al-Monitor:  There was the prospect earlier this year of a motion for a vote of no-confidence in the prime minister in the Council of Representatives. Are there any plans to reach out to the Iraqiyya, Kurdistan Region President Barzani and other groups to bridge political differences? Does the prime minister still consider the Erbil Agreement of 2010 as the basis for reconciliation?

Aldabbagh:  ... We [still] have a fragile political situation. President Jalal Talabani may play a major role in getting all the parties together on a real reform on all issues. The Erbil understanding need to be appreciated, but [we] need to add many more items and subjects which represent real concerns for all parties.

Al-Monitor:  What are the prime minister’s top priorities for Iraq in the coming year? Do you see improvements in security? In the economy? In Iraq’s regional policies?

Aldabbagh:  ... Security [is still among] the top priorities, as Iraq is still under [threat of] terrorism ... Also, providing services represents the second priority, but the inconsistent political situation influences and affects all the sectors, as well as regional instability and especially the Syrian issue, which has a direct impact on Iraq.