An Iraqi youth group has organized a reading event in Baghdad to promote a literary culture and fight extremism. 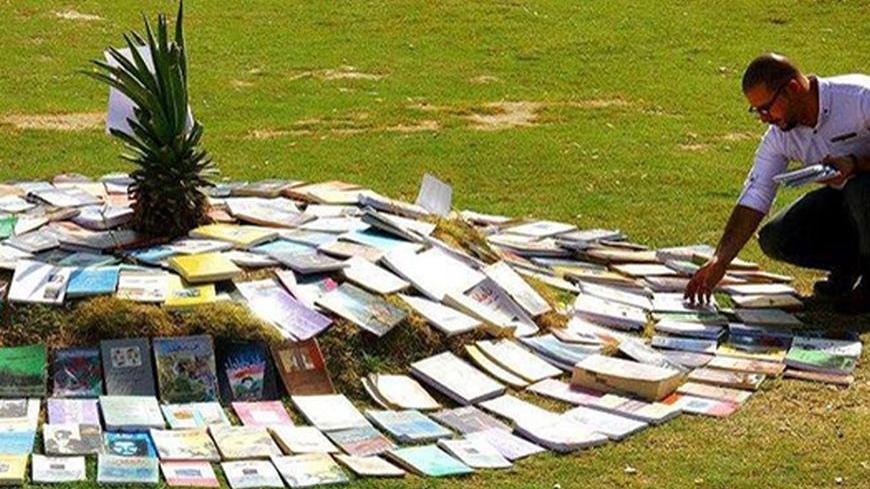 With the help of Iraqi intellectuals, 21 young volunteers inaugurated a large arena for group reading on Sept. 28 on Abu Nawas Street in central Baghdad. These young people, who included five girls, placed books in the gardens overlooking the Tigris River in a plan to encourage people to read.

Last year, this group launched the same initiative from Baghdad toward several provinces, and the project was warmly welcomed in the staunchly religious cities of Karbala and Najaf.

Over the last six months, the group collected books from intellectuals, donors and from the personal libraries of deceased writers in order to repeat the great group-reading day.

The youth, who founded the “I am Iraqi … I read” initiative, have revived the outdoor reading experience amid a fragile security situation, escalating political differences and warnings about the outbreak of a wave of internal displacement and sectarian war.

Hamed al-Sayyed, a journalist and one of the initiative’s organizers, told Al-Monitor in an interview, “The ‘I am Iraqi … I read’ initiative has drawn in all of Iraq. Despite their various ideological identities, those behind the initiative are working together to revive the spirit of reading among Iraqis.”

The initiative was heavily promoted on Facebook, where many members replaced their profile pictures with the initiative’s poster, hoping that the event will mark the beginning of the end of Iraq’s crises and that it will be an enlightening day that will help reduce extremism.

Sayyed said that some people thought that the time was not right to revive such a project because of the security conditions. But he said that the organizers wanted to promote books because reading can eliminate man’s isolation from his fellow man, as well as confront extremist thinking.

Families and young people put blankets on the floor and sat to read books about various subjects, but no material calling for extremism. The organizers set up a committee to banish all books promoting criminality or takfir (denouncing others as apostates).

The organizers refused offers of money or protection from political parties in order to avoid politicizing the initiative, according to Sinan Saadi al-Sabeh, one of the organizers, speaking to Al-Monitor.

The initiative comes at a time when the Culture Ministry is neglecting book production and marketing. The ministry has angered writers and intellectuals, a group of whom tried to organize a protest on Aug. 15 calling for the dismissal of the culture minister, but the Interior Ministry refused to grant them a permit to demonstrate.

Sayyed said that the initiative “is not expensive, which distinguishes it from government initiatives that squander billions of dinars without effect.”

Every evening throughout the past few months, the young people went to several areas to hang banners and distribute leaflets calling for Baghdad’s residents to attend the day of reading. Baghdad newspapers published on their last pages ads for the initiative for free.

Journalist Fares al-Kamel, who works in Kuwait, said his friends are encouraging him to quit his job to attend the “I am Iraqi … I read” event. In an interview with Al-Monitor, Kamel said that he really wished he could be present at the event, as this was the second time he was forced to miss it. He will, however, cover the project for a Kuwaiti newspaper. He also promoted the event on his Facebook page by posting a picture of his son surrounded with books. Kamel asserted that “Our only hope is for words, tolerance and enlightenment to deliver us from the violence.”

Sabeh said, “Financial donations to the initiative came by means of Facebook from intellectuals, activists and reporters, as well as from some businessmen.”

The youth responsible for the initiative want to turn it into an annual national celebration of collective reading, just like other national holidays, like Mother’s Day or Teacher’s Day.

Sayyed concluded by saying that the initiative aims to make Iraqis aware of their collective Iraqi identity and protect the country with a sense of belonging, because a country that is based on religious or sectarian identities cannot achieve security. He said that there must first be awareness that an Iraq that doesn’t read is a problem, and that once people are aware of that problem, the country may start on the path to creativity, publishing and reading.

In accordance with Iraqi laws on demonstrations and gatherings, the organizers of the book event obtained approval from the Interior Ministry. A security cordon was set up around the gardens to protect the attendees from suicide bombers, while young men prevented anyone carrying a weapon from entering the garden.

Omar al-Jaffal is an Iraqi writer and poet. He is an editor of Bayt and Nathr, two intellectual magazines that are published in Iraq. He is also the chief editor of Al-Aalam al-Jadid, an electronic newspaper.