People came from various Iraqi provinces to attend the "I’m Iraqi, I read books" festival in Baghdad, as Iraqis show determination to combat the forces of terror. 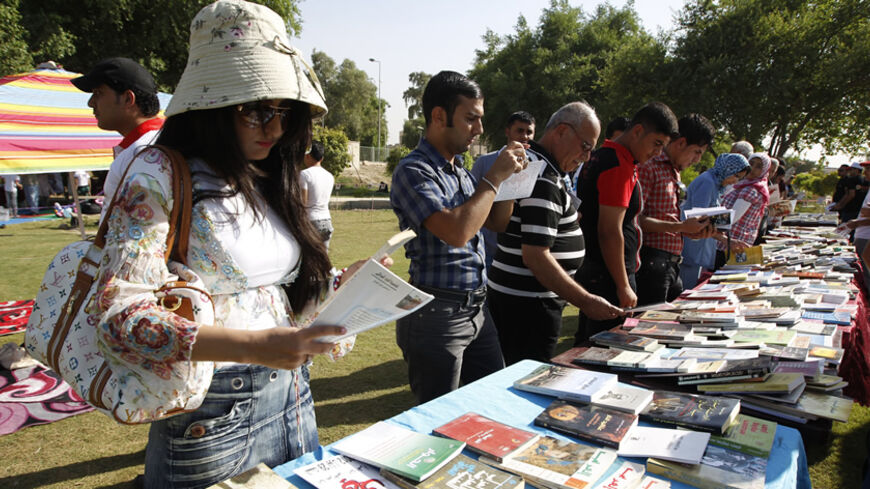 People browse through books during the launch of the "I am Iraqi, I read books" festival in Baghdad, Sept. 29, 2012. - REUTERS/Thaier al-Sudani

BAGHDAD — In a rare scene, thousands of books and CDs were lined up in Abu Nawas park overlooking the Tigris River in Baghdad. People gathered there, as they read and picked any book they desired for free. It was the Iraqi Reading Festival, known as the “I'm Iraqi, I read books” festival, which successfully celebrated its third anniversary on Oct 4. Men, women and entire families attended the festival, where they browsed among the books and enjoyed reading. The children rallied around children’s books, joyfully picking them for an Eid gift.

The festival’s idea was conceived of three years ago and was intended to be held for one day as a reminder of the importance of books. Yet, the Iraqis’ great interest in books prompted the festival’s organizers to hold this event every year, said Ahmed Abdul Hussein, one of the organizers, in a phone interview with Al-Monitor. However, the festival was different this year from previous years, held while the country was undergoing a violent terrorist war, which has posed a great challenge for the festival organizers.

In a phone interview with Al-Monitor, Bassam Abdul Razzaq, an activist and one of the organizers explained that this year the festival is an event that challenges terrorism. The Iraqis are holding the book in the face of terrorism. Razzaq described the thousands of people who attended the festival as "an army of readers that is backing up the armed forces, which are fighting against the Islamic State on the fronts right now.”

Many Iraqis believe that terrorism is the product of a warped and obscurantist idea that finds a foothold in the Arab and Islamic communities. The thousands of people who attended the festival under these difficult circumstances probably confirm this impression, as they were in a real atmosphere of celebration. Razzaq explained that the goal of the festival is enlightenment. "We are fighting the forces of darkness that are trying to spread the ideology of backwardness and terrorism, and this initiative is a reaction to backwardness and ignorance." He asserted that the presence of thousands of Iraqis at the book festival under such difficult circumstances highlights their desire that life should continue in the face of death.

A number of Iraqi and Arab publishing houses contributed to the festival this year, such as al-Rousoum, al-Mada, Adnan and the United Arab Emirates’ Dar Noun, which contributed a number of books. As for the large number of books, Hussein told Al-Monitor that they were collected from individuals and through donations that were supervised by the festival’s organizers on Mutanabbi Street in Baghdad. This year, the festival included a section on e-books that were copied onto CDs and distributed to those who were interested.

It seems that the Iraqis have not forgotten that Baghdad was once a city of enlightenment that helped their civilization to be disseminated across the world. By taking part in the reading festival, Iraqis have expressed their desire for Baghdad's role to be restored. Despite the insecurity and deployment of military units on outer roads, a number of Iraqis came from the provinces outside the capital to attend this year's festival.

Qasim, a student and civil activist, expressed her joy that a large number of youth came from all of Iraq’s provinces to attend the festival. In a phone interview with Al-Monitor, she said, “The large number of youth at this event gives us hope that Baghdad will not lose its civil character, and that once again it will be the city of culture and civilization.” For the third year in a row, Qasim attended the festival, because, as she said, she has nostalgia for the cultural boom era that prevailed in Iraq’s past, and said this festival reminds her of that era.

Given the attention from cultural and social circles, the festival is expected to create new prospects. The organizers have begun to apply this experience to other Iraqi cities, too. Last year and earlier this year, six reading events titled "I'm Iraqi, I read books" were held in a number of cities in southern Iraq.

Razzak told Al-Monitor the positive results achieved by the festivals push organizers to hold them in all Iraqi cities. He said that in addition to various Iraqi institutions, some states such as Turkey, Spain and Japan will support the festival through their embassies. During the meetings between the festival’s organizers and representatives of these countries, foreign embassies expressed their willingness to support and promote the festival. Hussein told Al-Monitor that the charge d’affaires of the Japanese Embassy in Iraq suggested the establishment of a mobile bookshop that travels through Iraqi cities, and that the Japanese Embassy donate the vehicle in which the books will be transported.

Under dictatorship, Iraqis have suffered isolation from the world and intellectual repression, where the ideology of a single party was fed. Following the ouster of dictatorship, terrorism — led by the forces of darkness and backwardness — has attacked the Iraqi people. Yet, despite the painful reality, they continue to oppose all forms of oppression and terrorism.

The "I’m Iraqi, I read books" festival is an example of Iraqis committing to their right to life and freedom, and to their belief in the role of reading in the advancement of their community and the strength of books in the face of terrorism.