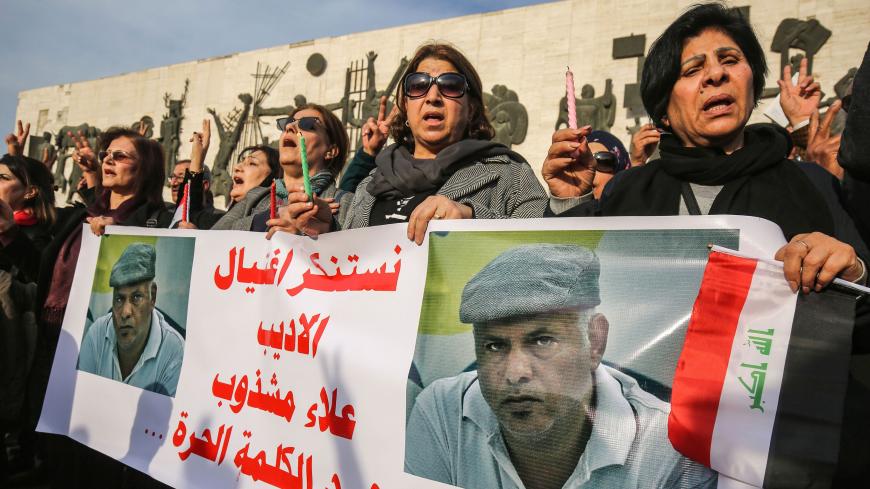 But the bustling cultural scene, which will run through Feb. 18, is darkened by the shadow of a terrific crime targeting one of Iraq's outspoken novelists, Alaa Mashzoub, earlier this month. On the evening of Feb. 2, Mashzoub was shot in front of his Karbala home and died at the scene at the age of 50.

Such a crime in the holy city, where security is very tight, frightened and angered Iraqi intellectuals and filled the social media with various speculation about the crime's motivation.

"It takes a bastard and a coward to shoot an unarmed person who has nothing but words and dreams," wrote author Ahmed Saadawi in a Facebook post. Saadawi, whose novel "Frankenstein in Baghdad" won the 2014 International Prize for Arabic Fiction and found success worldwide, urged the local Karbala authorities to bring his killers to court as soon as possible.

Culture Minister Abdul Amir al-Hamdani named this year's book fair after the assassinated novelist and urged the police to hasten their investigation to avoid a social rift.

"Arresting the culprits would end the rumors raised for political ends," wrote the minister in a statement on Saturday, "It is a great loss to Iraq's cultural scene. Mashzoub had always devoted his pen to promoting national unity and fighting against extremism and terrorism."

Many intellectuals, however, see the crime a reminder of the grim environment for Iraqi creatives and question the country's freedom of expression after the democratic transition in 2003.

"The assassination an unarmed intellectual riding a bicycle in a city that most Iraqis hold in great sanctity tells us that there are lines that should not be crossed," Nahidh al-Ramadhani, an Iraqi novelist and playwright from Mosul, told Al-Monitor.

Mashzoub's killing brings back nightmares of similar assassinations of prominent figures over the past few years.

Ramadhani expects similar crimes to follow, saying, "Previous assassinations went silently without anyone being prosecuted. The only role available to the educated now is to applause the corrupt political class and to distract citizens' attention from the current regime's great imbalances."

At the peak of sectarian violence, terrorist and other militant groups killed many notable figures, including actor Mutashar al-Sudani, comedian Waleed Hassan Ja'az, well-known calligrapher Khalil al-Zahawi and secularist writer Kamil Shiaa, who was a senior adviser to the Culture Ministry.

While no suspects have been arrested so far, Karbala police said a high-level security team is investigating the case and warned the press against "spreading fake news."

Nabeel Hamza, a parliament member representing Karbala, called the murder a random crime with no larger implications. "Karbala is one of Iraq's safest provinces," he said in a press statement. "This crime is not a common phenomenon as depicted by some media outlets."

"The Iraqi cultural act is somehow individual or limited to small communities," Porter told Al-Monitor. "There was no strong interaction with ordinary citizens. This encourages those in power to get rid of any source of annoyance and threat, fully aware there will be no huge public protests to defend the educated elite."

Mashzoub was a prolific writer who published 20 books, including novels, poetry collections and research into Karbala's cultural history. He won several local and regional literary awards. He criticized sectarianism, corruption and foreign and religious interference in Iraq's domestic affairs. In 2017, he celebrated the legacy of Iraq's once flourishing Jewish community in a novel titled "The Jewish Bath."

The Baghdad-based Sutoor Publishing House anticipated the wide interest in "The Jewish Bath" due to the sensitivity of the novel's theme. The novel's main character moves to Karbala rather than Israel and runs a public bath in the holy city, raising questions about whether Muslims can trust their personal cleanliness to a non-Muslim.

"I felt sad to hear of Dr. Mashzoub's assassination in Karbala," said Ronen Zeidel, a lecturer on Iraqi history and literature at Haifa University. "His novel 'The Jewish Bath' is a notable work and a prominent call for tolerance and acceptance of minorities in Iraq. I am so sad he is not at Baghdad's Book Fair now enjoying his achievements in literature."

In the heart of Baghdad, dozens of people including Mashzoub's colleagues protested the crime, carrying pictures of him and calling for the perpetrators' arrest and punishment.

Their wrath echoed beyond Iraq's borders. Pen America, an organization defending free expression in the United States and worldwide, condemned the murder.

“We mourn the loss of a prominent intellectual and writer in Iraq,” said Karin Deutsch Karlekar, director of the organization's Free Expression at Risk Programs. “It is critical that those who are willing to raise their voices and express dissident viewpoints in Iraq have the freedom to do so."

The public reaction has also been strong. The popular Facebook page "Da Vinci in Baghdad" intends distribute a thousand of Mashzoub's books on al-Mutanabi Street, Baghdad's cultural hub, for free.

"As the obscurantist powers wanted to silence the voice of Dr. Mashzoub, and as words will remain louder than the sound of bullets, we launched this initiative," read a post by the account. "It is a way to keep his ideas alive."

Mashzoub's work did make it to the book fair in the form of the writer's last novel, "A Black Street," for which the publishing house held a signing ceremony by his son Mustafa.

"It was among the best-selling books," wrote Iraqi novelist Khudair Fleih al-Zaidi on Facebook. "Mashzoub did not develop that stardom in his life. That is sad."

However, there were opportunities for protest at the fair, according to al-Zaidi. "The book fair visitors lined up to buy the book and express their rejection of violence," he said. "It is a protest against bloodshed and hate speech."