With its walls lined with books in Arabic, English, French, Spanish and Russian, Book Forum cafe provides a place for Mosul's youth to read, debate and smoke the hookah. 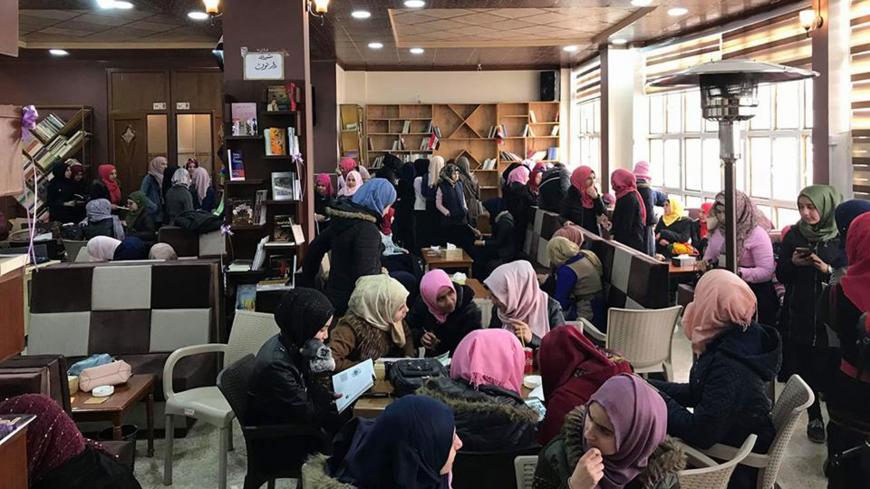 The colorful hijabs of the women and the smoke of the hookahs welcome the patrons at Book Forum (Multaqi al-Kitab), a literary cafe near the University of Mosul, in the eastern part of the city.

Old photos of Mosul in the 1930s and portraits of poets and writers decorate the walls. The famous Arab 10th-century poet Al-Mutanabbi shares the same wall with Palestinian poet Mahmoud Darwish, and both enjoy the company of Fyodor Dostoevsky, the Russian master of 19th-century novels.

It was difficult to imagine a place like Book Forum a year ago, when the Iraqi government announced the defeat of the Islamic State (IS), which had taken control of a third of the Iraqi territories. But the literary cafe opened its doors on Jan. 1.

Book Forum attracts both women and men, and especially students. Maslawis — as the people in Mosul are known in Iraq — enjoy getting together at the cafe to talk, read and smoke the hookah. The bookshelves are filled with thousands of Arabic novels, poetry books and masterpieces of the past, in addition to French, English, Spanish and Russian literature. Patrons can buy tea, coffee and juices and order pizzas, salads and sandwiches from a nearby cafe and enjoy the meal at Book Forum.

“During [IS'] occupation I stayed at our family’s house in west Mosul,” Harith Hussein, a civil engineer and one of the co-founders of Book Forum, told Al-Monitor. “At the time, I owned a shop in my neighborhood — al-Ma’moun — for repairing computers and electronic devices. Some IS members — those dressed in qandahari, the Afghan-style pants [that the soldiers wear] — used to come to my shop. I sometimes pretended not be able to repair their computers. I did not want to help them."

After the liberation of Mosul, Hussein met with Fahd Salah, also an engineer, to talk about opening a literary cafe. “A place like this in Mosul was much needed,” Hussein said. “There was no a mixed-gender place where men and women could sit in the same space and also read.”

Rou’a Almemari, a young woman studying for a master's degree in agriculture, is responsible for running the bookshop. Five waiters work every day in shifts from 9 a.m. until 10 p.m., except for Friday morning when the cafe is closed until 3 p.m. Many university students come to the cafe to study for their exams and to meet their professors.

Marwa, a French literature student, visited Book Forum in October to meet French writer and traveler Sylvain Tesson. “I did not come simply to listen to a French writer and to practice my French,” Marwa told Al-Monitor. “I came because I am curious to know what he learned about other cultures through his travels.”

The Facebook page of Book Forum shows its logo, which is a cup of tea shaped like a book with a saucer. More than 11,000 people, including foreign journalists and authors who have visited the cafe or donated books, have liked the cafe's Facebook page.

“We brought all our books here, we bought others — some were donated by friends from all over Iraq and abroad,” Hussein noted. “We have almost 4.000 books. From France we received a donation of 300.”

Book Forum organizes performances of the traditional oud, a luth-like Middle Eastern instrument, and poetry evenings. The cafe participates in book fairs, and it encourages writers to publish their texts. Sharing 50% of the costs of the publications, authors' books are introduced to the public with a launch event, where the authors tell their story and reads from their book.

The cafe also hosts meetings of young civil society activists, who organize workshops and peace-building activities in the region. In March, Book Forum organized an event titled "Mosul Talks," where issues such as "governance and social reconciliation in Mosul after IS" and "transitional justice after IS" were discussed. In January, a debate was organized on whether Mosul had lost its identity after two occupations, in collaboration with activists from the “Gilgamesh Center for Antiquities and Heritage Protection.”

Iraq is renowned in the Middle East for its literary culture.

Hussein noted, "Book Forum is in contact with bookstores on the famous Al-Mutanabbi Street in Baghdad and the main publishing houses in the country. When new books are printed, we receive copies.”

Hussein said that he wants to heel the wounds of war. “Whenever I think about the bad memories of war and the occupation, I feel sad. We survived the battles and once our area was liberated by the Iraqi forces, I spent my time burying corpses. I buried 31 bodies together with three men from my neighborhood. Now I only want to touch books,” he concluded.