Palestian writer Atef Abu Saif has been nominated for the International Prize for Arabic Fiction but was stopped by security services from attending the announcement in Morocco. 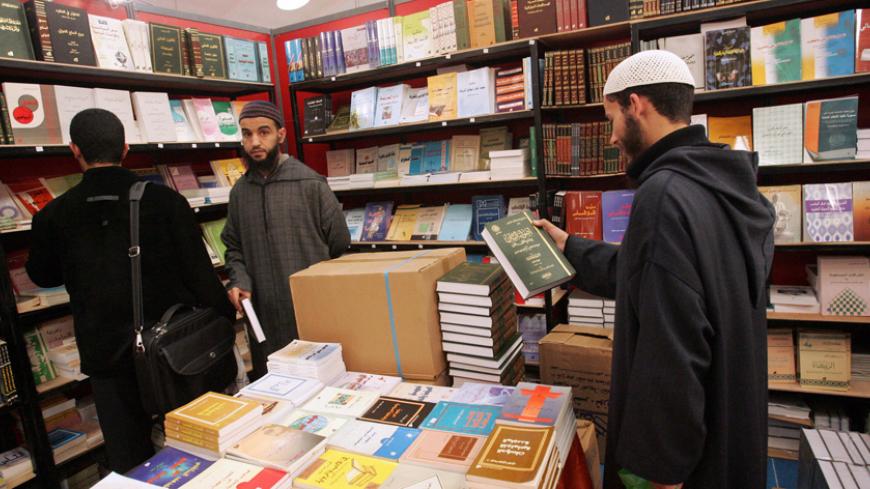 GAZA CITY, Gaza Strip — “A Suspended Life,” a novel by Gazan writer Atef Abu Saif, has made it to the finals for the International Prize for Arabic Fiction. The news was announced during the Casablanca International Publishing and Book Fair on Feb. 13.

Despite the prominence of the cultural and literary products of the Gaza Strip, the security apparatus in Gaza does not seem to appreciate this richness. The Hamas-affiliated security services stopped Abu Saif at the Beit Hanoun (Erez) crossing Feb. 4, preventing him from making it to the book fair in Morocco.

Abu Saif wrote about it in an article titled “About Hamas and Culture” for the Palestinian Al-Ayyam newspaper.

“Last week, on my way to the West Bank heading to Morocco, I was surprised by Hamas-affiliated security forces preventing me from traveling. What happened is an unjustifiable act that cannot be explained or warranted on any ground,” he wrote.

It appears that this kind of incident has become the norm in Gaza, following the deterioration of the economic and security situation and the successive wars on this small area.

In the Gallery Cafe, the only gathering place for literati in the Gaza Strip, writer Tagrid Atallah told Al-Monitor, “The past three wars on Gaza have taken their toll on culture, which is no longer able to stand again on its feet. There is no longer fertile soil for culture because of life-essential requirements such as seeking housing, income and electricity, which have become the main focus of everyone especially for relief and aid institutions. As a result, culture and development have been neglected and forgotten.” She added that there is no integrated cultural scene in Gaza, but rather creative individuals.

Hussein told Al-Monitor, “The Ministry of Culture and the Union of Palestinian Writers are the ones responsible for the deterioration of the literary scene in Gaza. It is as if Gaza does not exist on their map for them to organize cultural projects and send support.”

Hussein stated that the wars and political changes do not affect the quality of creative production. On the contrary, he said, these factors have contributed to enriching the literary scene, especially poetry, and Gazans are working on writing stories and novels. However, exporting and developing such cultural works seem impossible.

Hussein, who published his last work of poetry in 2011, said that literary production by Gazans has emerged abroad, given the lack of publishing houses and authors’ rights in Gaza.

“[Palestinian] writers have been dealing with publishing houses in Cairo, Amman and Beirut, while others content themselves with electronic publishing on social networking sites,” he said.

Poet Rizk al-Bayyari, the general coordinator in the Union of Palestinian Writers, shares Hussein's view. He told Al-Monitor, “The Union of Palestinian Writers ought to support creative writers and novelists, printing and publishing their books and works and organizing literary activities. However, the union has been marginalized in Gaza for the past eight years to the extent that its renting fees have been accumulating for four years and four months.”

He added that officials and other decision-makers have been marginalizing the cultural scene in Gaza, while partisanship is on the rise, dragging society down. Members of political parties and thugs have the support of institutions and satellite television stations that voice their messages, while novelists remain sidelined.

Pictures of the few remaining poets and writers from Gaza hang on the walls of the Gallery Cafe. According to the Union of Palestinian Writers, 23 members in addition to other non-members have permanently left the Gaza Strip.

Khaled Jomaa, one of the poets who left Gaza, recently settled in the city of Ramallah. In an interview with Al-Monitor via Facebook, he said, “The situation has not changed for me in Gaza. There are still creative writers and poets, even if the numbers of gatherings and seminars have declined."

Jomaa does not see his departure as leaving Gaza behind, but he settled in Ramallah to work. He added, “Under the circumstances in Gaza, it is only normal for people to think of immigration. Not only because of the dire conditions, but also because there are no prospects for a solution.”

The Gallery Cafe once hosted literary seminars, poetry readings and music evenings on a daily basis. Poet Khaled Shahin, one of the owners, had to open in the new location after the cafe was bulldozed by the previous Hamas government before the eyes of its patrons.

“After the destruction of the cafe in 2012, we thought of establishing a new locality because writers need to gather, meet and organize literary and national seminars away from the culture of political parties,” he told Al-Monitor.

He added that the cafe is currently the only resort of Gaza's writers and intellectuals, who organize monthly meetings and seminars with the Union of Palestinian Writers and the Gaza Association for Culture and Arts.

There are hardly any literary publications in Gaza aside the magazine “28,” which was started a year and a few months ago. The magazine was intended to produce issues on a monthly basis, but because of the high costs of publishing, it comes out every few months, according to poet Wissam Owaida, one of the founders.

“The magazine published four issues during one year, given the high prices of printing and the lack of interest of concerned major companies in such publications,” he told Al-Monitor. He considers the magazine the only platform for young poets and writers away from social networking sites.

In his article, Abu Saif wrote, “One can clearly spot the numerous violations and banning of cultural events and activities, as well as literary traditions and heritage. This is not to mention the dismantling of the system of the cultural work and organizations, paving the way for partisan ideology to have the upper hand in the cultural clash. Hamas has established a parallel union for every existing union, in a step that can only be understood as aiming to deepen the division and contaminate culture, which is ostensibly the most immune to it.”

In the coming days, the Gaza Strip may receive its very first international prize for Arabic fiction. If Abu Saif is recognized for his novel, will he be able to participate in the event’s closing ceremony, or will he be stuck in Gaza?