Difficult living conditions and lack of funding or royalties have discouraged Gaza's novelists. 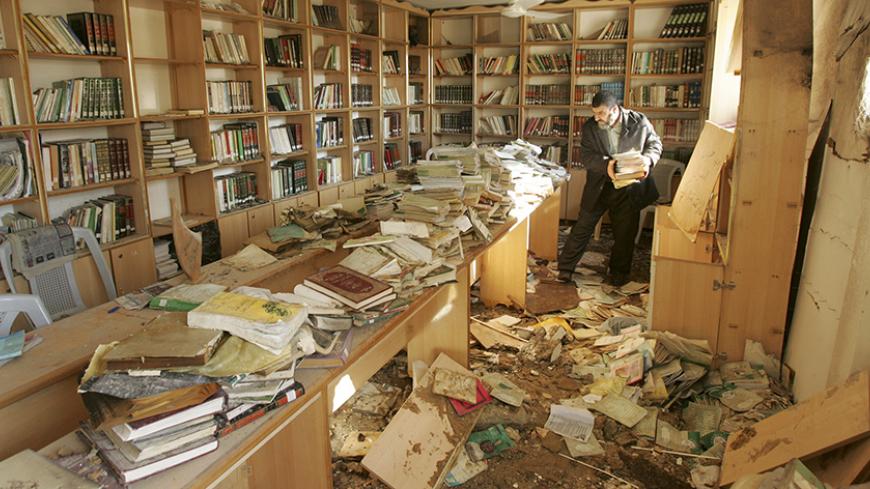 A Palestinian man inspects the damage to a library inside a mosque after local witnesses said it was hit by an Israeli airstrike in Gaza, Nov. 18, 2006. - REUTERS/Mohammed Salem

GAZA CITY AND KHAN YOUNIS, Gaza Strip — Novelist Hani al-Salmi, 36, dreams of the day when he can stop selling perfume in a shop in Khan Younis in the southern Gaza Strip and devote himself to his novels. So far, he has written eight novels and published six of them.

A few days ago, Salmi, who makes less than 600 shekels a month (about $155) selling perfume, printed his sixth novel, “Haza al-Rasas Ahibbouhou,” or “Those Bullets, I Love.” Abdel Mohsin al-Qattan Foundation in Gaza, which specializes in educational and cultural services, published the novel and covered all costs. Salmi won the Qattan Foundation's prize for best novel in 2012.

Salmi told Al-Monitor that the literary scene in the Gaza Strip is almost extinct. The government and its ministries neglect the publishing industry, said Salmi, despite the existence of novelists with world-class ideas, prompting most novelists to write poetry because it is easier and faster to deliver to the public. Most writers, Salmi said, have stopped writing short stories because of the efforts involved.

“Some factors have played an important role in this significant decline, as no one specializes in printing novels, and the partisan and literary division significantly affects printing activity because every political party cares only about its popular base," said Salmi. "In addition, the poor economy is making most writers unable to afford the printing costs. Also, some nongovernmental institutions monopolize printing and have the ability to decide which novels get published.”

Writer-novelist Yousra al-Ghul said that culture has become a luxury for Gazans, indicating that publishing is in crisis, especially in the absence of a national library in Gaza. The library was bombed in the 2012 Israeli war on Gaza, as confirmed by Gazan writers.

“Novels are published on a small scale in the sector, but at the expense of the writer himself," said Ghul. "The writers union is absent and the Ministry of Culture is divided in two — one in Gaza and one in the West Bank. Funding is weak and no one is sponsoring these writers, so [the writers] isolate themselves. The Gaza Strip is packed with a lot of young novelists from both sexes. They participate in Arab competitions, but [these efforts will remain meaningless] until publishing houses start printing them.”

Ghul said that if novels did not find local financial backing, then Palestine would remain without books, which is why some young novelists solicit financial support from international institutions. Ghul said that all activities are influenced by the donor’s agenda and may not conform to society’s customs and traditions. When one is dependent on outside support, he said, one is bound by the red lines set by the funder.

Some Palestinian writers are exploited by Arab and international publishing houses, which pirate their stories or sell them to TV networks and filmmakers, without paying the authors royalties. Ghul said that a production company used the title of his novel and turned it into a TV series without his knowledge or consent.

Ghul is unsure whether this was a coincidence or a premeditated attempt to steal his work. “When I spoke with the owner of the publishing house, he told me that there are no property rights," said Ghul. "So some writers are having their works stolen and none of them can sue the directors because there are no book registration numbers in Palestine. Also, some writers in Gaza send their work to Arab publishing houses that then attribute the work to someone else.”

“In addition, there’s the siege imposed on the Strip, the bad economy and the exceptional life circumstances," he said. "All these factors are making people not read because the book industry evolves with the evolution of life and technology, and this depends on effective institutions working in an open market.”

Askalani said that without external support the novelists can only publish in rare circumstances, and even so, they are still taking a risk. "The situation is difficult," he said. "Writers and creators cannot afford the costs without external support, including official support from the Palestinian Authority and the government in Gaza. [Support is provided] by some civil society organizations working in culture. Those depend on conditional funding that limits freedom of expression and distribution. So many writers are choosing to publish their books on social media.”

Writers such as Mohammad Nassar and the author of this article have published their works on social media.

The absence of publishing houses and the prevalence of governmental neglect in the Gaza Strip have led to the deterioration of the literary scene, thus giving financial donors creative control over the published material.