Meshaal to Tehran: Return of the Prodigal Son? 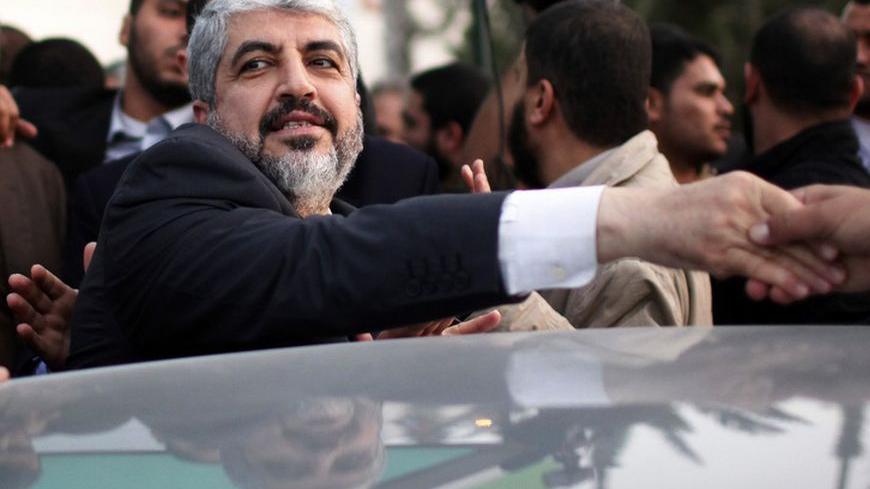 Khaled Meshaal will visit Iran. This has been confirmed by Al-Monitor’s sources in Tehran, but still unconfirmed — to us and Meshaal — is the timing.

It was obvious that relations between Hamas, the strong Palestinian resistance faction, and Iran, its regional backer, deteriorated due to conflicting interests in Syria. Iran backed its ally Bashar al-Assad while Hamas decided it was time to ally with its ideological mother, the Muslim Brotherhood, which was already gaining ground in Tunisia, Egypt and was a favorite to rule Syria, in case the revolution succeeded in toppling the regime.

But out of the blue the situation changed. The Brotherhood in Egypt was toppled, and Hamas found itself up a blind alley. A previous piece I wrote for Al-Monitor on Aug. 12 explains how Hamas and Iran began this new chapter and who were the main players.

In Tehran, there was still a wing that thought the revival of relations with Hamas needed a confidence-building process, an Iranian source close to this wing told Al-Monitor, adding, "What happened during two years of crisis in Syria raised concerns over the benefit of supporting a group that, at the first serious junction, turned around and placed itself in the camp of our enemies." The source stated, "Since there is a consensus on closing the old chapter completely, we don’t mind, but it’s better to frame the relation."

A well-informed source in Tehran told Al-Monitor that one month ago, at the funeral of Quds Force commander Qasem Soleimani's mother, Hamas official Mohammad Nasr visited Tehran to pay condolences to the man who is believed to oversee and manage Iran’s influence in the Middle East. The source revealed that there was a suggestion that Meshaal himself lead a delegation to the funeral, but the Iranians thought it too early to broach this stage. “Khaled Meshaal personally is responsible for the old chapter. There were historical leaders in Hamas who opposed his anti-Iran policies, therefore Iran was waiting a real change. Here, the problem is with Meshaal himself and not with Hamas anymore.”

Nasr’s move was an icebreaker with respect to direct contact between Meshaal and the Iranian leadership, with an agreement settled to take the relations further. In this regard, days ago, Nasr visited Tehran once again carrying a message from Meshaal, who at almost the same time was delivering a speech from Istanbul via videolink to a gathering in Beirut regarding Jerusalem. In his speech, Meshaal stated that he’s with the people’s right to protest peacefully and not raise weapons, calling on those fighting to direct their arms toward Israel and seek to liberate Jerusalem from Israeli occupation.

Meshaal’s stances were seen as positive in Tehran, and from here, it is believed that the second stage will start. The second stage means an official visit by Hamas’ leader to the Iranian capital. A Palestinian source in Tehran told Al-Monitor that Meshaal expressed his willingness to visit Tehran and the Iranians welcomed the move, but the only thing pending is the timing. Sources believe there are few hurdles blocking Meshaal’s way, but this doesn’t mean the relation with Hamas isn’t improving: “Hamas is regarded as part of the bloc, and Iran is assisting them. As far as they are resisting Israel, then they can bet on us.”

It’s important to mention that despite the ups and downs of Iran and Hamas' relationship, the group’s office in Tehran didn't close, its representative never left and visits from several of the group’s military and political officials didn’t stop.

On a final note, an Iranian official said, “If Meshaal is to visit Tehran at any time, for sure, you’re not going to know the timing from media outlets. He’ll come to Tehran and then people will know, Abu al-Walid [Meshaal] is a resistance leader and there are security measures to be taken to keep him safe.”

Editors Note: A previous version of this article wrote that Mohammad Nasr visited Tehran for Qasem Soleimani's funeral instead of his mother's. This has been corrected.