A visit to the graves of two of Iran's nuclear scientists, who were assassinated, reveals popular support for the country's nuclear stance. 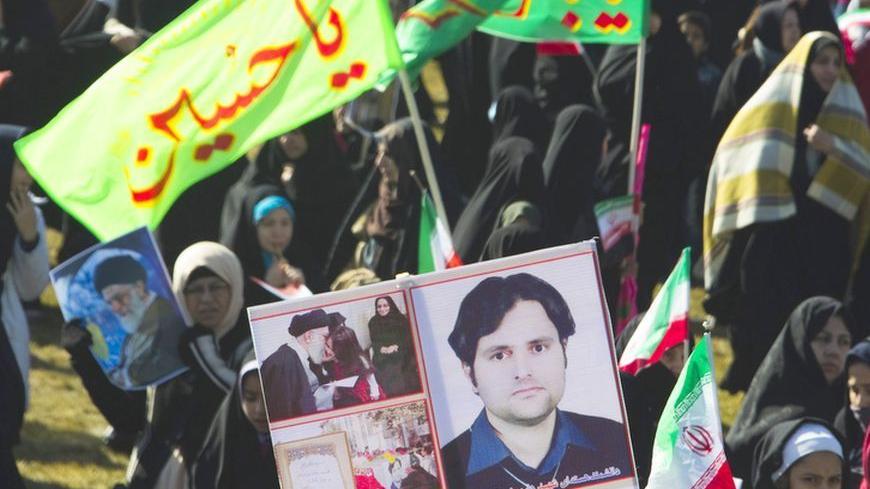 A demonstrator holds a picture of assassinated scientist and member of Iran's Atomic Energy Organization, Daryush Rezainejad, during a ceremony to mark the 33rd anniversary of the Islamic Revolution, in Tehran's Azadi Square, Feb. 11, 2012. - REUTERS/Raheb Homavandi

TEHRAN — Just beside the shrine of Imamzada Saleh, a son of Shiite Islam's eighth imam, lie the graves of two of Iran's assassinated nuclear scientists. Majid Shahriari and Daryush Rezainejad were killed in separate attacks in Tehran in 2010 and 2011, respectively. The burial of the scientists inside the fences of the shrine had symbolic meaning, just the same as building Fordow beside Qom (a previous piece elaborates on this), transforming the nuclear program from a case to a cause.

Before the grave, there was a group of people reading prayers, a woman among them in tears, beside her a little girl was placing her hands on the grave. I asked the woman in my broken Farsi if she were a relative of the slain scientist. To my surprise, she shook her head, then looked at me as if I had insulted her: "This is one of this nation's heroes; he gave his blood for us to progress and be among the advanced nations of the world," she said. "Anytime I'm here to visit imamzadeh, I pass as many others do to pay him and his brothers respect."

I thought it was an opportunity to ask her as an ordinary Iranian on her thoughts about the nuclear negotiations in Geneva. "Our government knows the suffering we are going through because of the sanctions; we paid a lot, these young men paid blood," she said, adding, "So we aren't going to allow any concessions on our right to have nuclear technology. This isn't the government's nor the regime's, it's the Iranian nation's right."

While she was talking, a young man with a modern look came up, jumping into the conversation: "I didn't vote in the election because I don't believe in the whole system, but when it comes to the nuclear [issue], I can't but support our nation’s ambitions," he said. "Why can they (the West) have it and pressure us not to? I don't see a reason."

The same day I had an appointment with Siddika Salarian, the mother of another assassinated nuclear scientist, Mustapha Ahmadiroshan. At her northern Tehran home, she received me. The place was covered with pictures of the slain scientist, a picture of him when he was 6, another one with his 6-year-old son Ali, a copy of his will, and a large picture of both Imam Khomeini and Supreme Leader Ayatollah Ali Khamenei.

"He was my only son," she told me while looking at one of his pictures, "I'm a proud mother. My son was one of those who gave Iran his life for its pride, and that's why today I and the other families of the martyred scientists stand firm against any setbacks for any reason. We gave up our children for a reason, for a cause that means a lot for most Iranians."

I asked her if she had anything to say to the West, especially with the optimistic breeze blowing around the negotiations. "We are a peace-loving nation; we don't want wars, they punished us because we are after progress," she explained. "They thought that they could stop our young generation from acquiring better technology, but they failed because we have an unbreakable will. We open our hearts to all the peace-loving nations, except for Israel, that have nuclear weapons which Imam Khamenei prohibited."

"I have a message also for our foreign minister, Mr. [Mohammad Javad] Zarif," she told me: "You and your team have our children's sacrifices with you; don't give up for any reason our rights in having a peaceful nuclear technology. Today this is a matter of existence, and for its sake we gave the most precious, our children's blood."