Iranian Foreign Minister Javad Zarif says that if there is a chance for peace in Syria, “we have to grab it.” 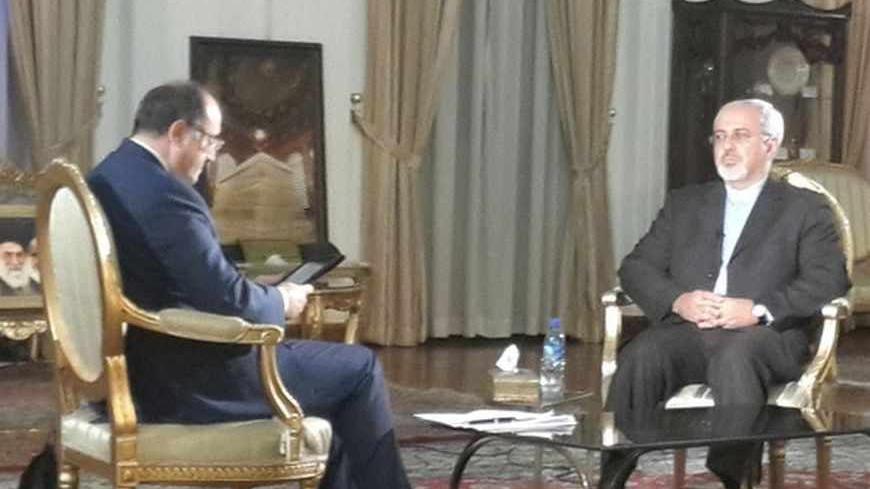 TEHRAN, Iran — My first visit ever at Iran's Foreign Ministry gave me a real impression of the country I'm reporting from. It is a huge complex inherited from previous eras, with a concentrated ambience of royalty. As I walked through the corridors, the rooms on both sides of my path had plaques with the names of certain countries or regions around the world. These are the offices of the Iranian undersecretaries that take care of each part of the world.

The TV network I work for, Al Mayadeen, had an interview with Iranian Foreign Minister Mohammad Javad Zarif, marking his first appearance on Arab or international media since being appointed as head of his country's diplomacy.

The interview was mainly about messages to the world, including the United States, where Zarif himself lived around half his life as a university student and in Iran’s foreign service.

"There's a mutual lack of confidence," he said while answering a question about exchanging messages with President Barack Obama's administration, adding, "We are ready to engage with the United States in the process of confidence building. If they want our confidence they must trust us — we don't seek nuclear weapons and it's in their interest to accept Iran's peacful nuclear program."

Zarif, who reflected a high caliber of statesmanship and prudence in choosing his words, told Al Mayadeen's Ghassan Benjeddou that both his country and the United States exchanged messages on Syria. Some of this dialogue happened in December 2012, when "Tehran warned Washington over the smuggling of chemical weapons to Syria's extremist groups." From the foreign minister's words, it was clear that Iran is very sensitive about the issue of chemical weapons.

"Iran was a victim of the chemical weapons during the eight-year war with Iraq," said Zarif, explaining that during the last standoff on Syria, Iran replied to American messages by ensuring that based on Tehran’s information, it was not regime forces who used the chemical weapons. "There's no shred of evidence," he asserted, warning that the "use of force has never been able to solve problems, [but] rather complicates them. The use of force has lost its power — look at Afghanistan and iraq. You can think of a limited strike, but when the force is unleashed, you can't stop it."

It was as if Zarif were advising the United States that it needs not a new war front, but rather a break that might allow the region to breathe and the United States to rethink its strategies and alliances. Maybe this might be an indirect message to Washington that solutions to any problems in the region should be discussed at the negotiating table.

Zarif expressed his country's full support for the Russian initiative on Syria's chemical weapons, saying Iran wants "to prevent war and see this region free of WMDs." He added, "We are naturally supportive of the initiative. We are very happy, though we still see that drums of war are still beating." He said that Iran knew about the initiative, and that's why its undersecretary was in Moscow along with Syria's foreign minister when the plan was announced. The initiative, according to Zarif, was suggested before US Secretary of State John Kerry's speech. He said, "We hope we can address the problem of the extremist groups' acquisition of chemical weapons."

Zarif welcomed any effort to solve the crisis in Syria, but stated that there should be no preconditions, especially ones that adopt one point of view. "You cannot mediate a solution while you are asking one party to bow to the other," he said, "Ballot boxes should be the answer." It was clear that Iran might not be taking part in the Geneva II conference, but still, Zarif affirmed that "Regardless of Iran's participation, if there is a chance for peace, we have to grab it."

On the Arab role in Syria, Zarif said that according to his information, there is no consensus among the Arab states to support the use of force, though the segment that is campaigning for this choice is a "vocal minority." Zarif took the opportunity to express his country's readiness to enhance relations with its neighbors, but underlined that Iran is "the biggest and strongest power in this region," and that this should be taken into consideration. Zarif revealed that he will meet UK Foreign Minister William Hague in New York, denying previous reports that Hague requested a meeting with President Hassan Rouhani. He stressed that reconnecting with the United Kingdom requires some legal moves, because the decision to downgrade the ties was made by the parliament.

After the interview, in a side chat with Zarif, I asked him whether he thought it possible to see US officials in Tehran anytime soon. His answer was that whenever Iran's concerns are met, then there should be no problem.