On Syria, Iran to Do 'What’s Appropriate'

Iranian leaders warn of the consequences of a Western military attack on Syria but will weigh their options for a response, if any. 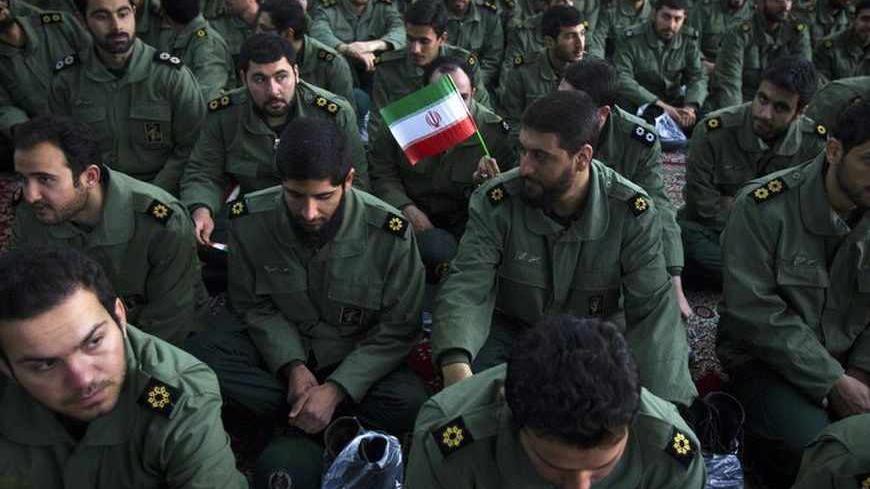 Members of the Iranian Revolutionary Guard Corps attend an anniversary ceremony for Iran's Islamic revolution at the Khomeini shrine in the Behesht Zahra cemetery, south of Tehran, Feb. 1, 2012. - REUTERS/Raheb Homavandi

TEHRAN, Iran — Until the afternoon of Aug. 28, there had been no clear Iranian position on the possibility of a military strike on Syria. According to an Al-Monitor source in Tehran, the Iranians were, of course, assessing the situation, weighing their options and preparing their files in accordance with the latest developments. Ayatollah Ali Khamenei, Iran's supreme leader, was said to have had all the plans on the table when he met at an undisclosed time with top Revolutionary Guard Corps officers and his closest military advisers. The source acknowledged, “There is a hot line to Hezbollah’s leadership in Lebanon and the Syrians,“ stressing that the “resistance bloc“ has been expecting this moment since the beginning of the crisis in 2011.

The first move by the Iranians was toward their most powerful allies, the Chinese and the Russians, sending a clear message to both countries  on Aug. 26: “Iran will stand by Syria till the end. We’ll stand by our alliance even if you decide to give up. We are with Syria until the last breath.” That message was followed by several other steps, including talking directly with countries able to convey messages to the United States and the United Kingdom.

Al-Monitor's source offered, “Iran is famous for its cold-hearted diplomacy, and that’s why they were slow, but sure, in their moves.” He further explained, “Those threatening Syria heard an unambiguous message: The scale of such a war can’t be controlled, and Iran and its allies in the region won’t let Syria fall.”

On Aug. 26, it was reported that UN Undersecretary-General for Political Affairs Jeffrey Feltman, a former US diplomat, had asked the Iranians to remain calm in the event of strikes against Syria. Iran took the warning seriously and began looking for ways to prevent Damascus from suffering such an attack.

“The Americans are saying the strike will be limited and is essential for the restoration of the balance of power before going to Geneva II,” the source told Al-Monitor. “Iran won’t give its blessing for such a strike and will exert any type of pressure to stop it, but if it happens, then we’ll do what’s appropriate.”

In Iran's dictionary, “what’s appropriate” could mean anything — from doing nothing to launching a war to something in between. Taking into consideration all the support Tehran and Hezbollah have given Syrian President Bashar al-Assad during the last couple of years, it is difficult to imagine they will let a strike pass without some kind of response, sooner or later.

On Aug. 28, a barrage of statements from Iran’s top political and military officials suddenly hit the media. On that day, during a meeting with President Hassan Rouhani, Khamenei warned, “The intervention of America will be a disaster for the region. The region is like a gunpowder shop, and the future cannot be predicted.” Moments later, Rouhani added his take on the situation, stating, “The people of the Middle East do not accept a new war, and any adventurism in the region will pose irreparable dangers to its stability and the world and will merely lead to the spread of extremism and terrorism in the region.”

Foreign Minister Mohammad Jawad Zarif and Majles Speaker Ali Larijani both warned of the dire consequences of the war. Al-Monitor's source explained, “Who can guarantee a limited or an unlimited strike? nobody.” He added, “This reminds me of the war on Libya a couple of years ago. They deceived the UN Security Council and the Russians by claiming they were going to implement a no-fly zone, then they started doing everything until they toppled and killed [Libyan leader Moammar] Gadhafi. If they want to do [the same in Syria], then they’ll have to walk over our dead bodies.”

The Iranians believe their message has been “read carefully by the Americans” and that a “strike on Syria might lead to a widespread war that could be worse than anything.”

Later, more Iranian officials issued statements, with General Qassem Soleimani, commander of the Revolutionary Guards' Quds Force, reportedly saying explicitly that al-Sham, meaning Syria and Lebanon, is a red line for Iran and that it is the graveyard of the Americans.

Soleimani's remarks were followed by a clear threat from Gen. Mohammad Ali Jaafari, head of the Revolutionary Guards, who warned that Syria will be United States' next Vietnam.

Ali Hashem is an Arab journalist serving as Al Mayadeen news network's chief correspondent. Until March 2012, he was Al Jazeera's war correspondent, and prior to that he was a senior journalist at the BBC. He has written for several Arab newspapers, including the Lebanese daily As-Safir, the Egyptian dailies Al-Masry al-Youm and Aldostor, and the Jordanian daily Alghad. He has also contributed to The Guardian. On Twitter: @alihashem_tv