Saudis Set Back by US-Russia Deal on Syrian Chemical Weapons

Saudi Arabia, like Iran, has pursued a sectarian interventionist strategy in Syria that furthers the war and undermines a democratic transition. 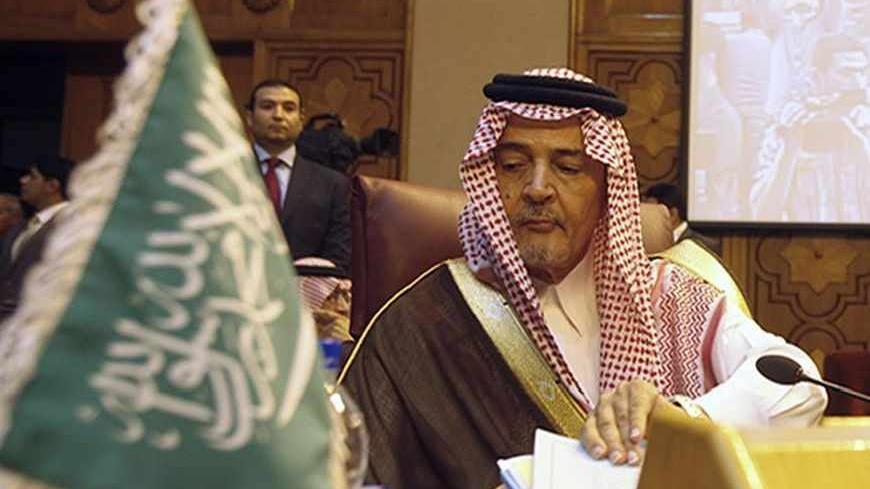 Saudi Arabia miscalculated the ease with which US-led Western powers could quickly organize a military strike on Syria following the now-confirmed chemical attack of Aug. 21. The push for a quick strike stumbled in Washington, London and Paris, giving way to high-level diplomacy between the United States and Russia and disappointment in Saudi Arabia. The US-Russian framework for the elimination of Syria's chemical arsenal appears to be a deviation from Riyadh’s immediate objectives. By focusing on the sole objective of removing the Bashar al-Assad regime from power, the Saudi leadership may have overlooked that despite having important resources and weight, regional powers like itself can today be constrained by the changing international environment.

In Jiddah on Sept. 16, Crown Prince Salman Ibn Abdul Aziz presided over the Council of Ministers and warned the international community against reducing the Syrian crisis to the issue of chemical weapons. In anticipation of a UN Security Council meeting on Sept. 18 to discuss the UN report on the Syrians' use of chemical weapons and pass a strong resolution, Salman called on the international community to strengthen the Syrian opposition and protect civilians, reminding it of the urgency of pushing for a new regime in Damascus. Saudi Arabia may soon find itself a spectator on the periphery, watching an international game in which it can only make noise, and possibly trouble, if its objectives cease to be a priority for other, more important international players with their own agendas.

The US-Russian framework unexpectedly eclipsed active Saudi diplomacy of the last weeks, during which it insisted on military intervention in Syria. While the United States continues to stress that this framework does not rule out future military strikes in case of noncompliance, this is simply not enough for Riyadh.

The Saudi leadership’s bewilderment over the changes that have swept the Arab world over the last three years has focused its foreign policy on two main objectives. First is sabotaging any glimpse of a democratic transition that might lead to the rise of new, unpredictable forces in Arab countries and consequently undermine its own grip on power domestically. From the Saudi perspective, any political change threatens to undermine a familiar status quo characterized by political stagnation and repression, defined by the Saudis as stability.

"Change" to the Saudis means unpredictability, chaos and loss of influence in a region that has been dependent on the integration of its failing economy into the Saudi oil empire. From subsidizing poor, loyal regimes to taking in excess labor migrants, Saudi Arabia has ensured that poor Arab countries remain within its sphere of influence. Yet this policy seems to be dependent on authoritarian and repressive regimes remaining in power and willing to play the Saudi's game of loyalty in return for oil rent. The Arab uprisings threatened to destroy this formula, leading the Saudis to fight several battles in different places at the same time. From Bahrain to Yemen and Egypt, loyalty for oil must be reinforced because it is the only way the Saudis can remain relevant at the regional level.

The second objective is removing regimes that have distanced themselves from the Saudi sphere of influence and revolve in the competing Iranian sphere, as is the case with the Syrian regime. Only a military strike that promises to remove the current Syrian government will satisfy the Saudis and the Syrian opposition forces that have emerged under its patronage. Therefore, the destruction of Syrian chemical weapons, albeit a welcome step toward weakening the regime and enhancing the chances of its rivals, falls short of meeting Riyadh's urgent requirements.

What makes things more complicated and challenging from the Saudi perspective is the recent gradual rehabilitation of Iran as a major player that the international community seems to be willing to accommodate following the 2013 presidential election that brought to power Hassan Rouhani, someone believed to be willing to moderate Iranian foreign policy. Saudi influence will receive a great blow if the United States and Iran reach an agreement on the Syrian crisis.

Certainly the United States would prefer not to rely on only one regional power to guard its interest in the Middle East. So far, the Saudis remain a steady regional ally. A rapprochement between Washington and Tehran would be interpreted in Riyadh as a blow to its special relationship with the United States. Although the relationship has experienced serious challenges in the last decade, it has nonetheless remained firmly established through common interests. Today, neither the Americans nor the Iranians can afford to sustain their hostility and mistrust to satisfy Riyadh’s desire to remain the only regional partner on which Washington can depend.

Here one has to imagine the unimaginable. If Iran makes progress in negotiations on its nuclear program with the help of Russia, a great tension will have been diffused in the region. Security in the Gulf would be enhanced without the looming threat of future military confrontations that all the Gulf states, including Saudi Arabia, should be worried about, not to mention the rest of the world, whose livelihoods depends on the regular flow of oil from the Gulf.

More important, maintaining a nonconfrontational balance of power between regional players like the Saudis and Iranians would no doubt have a positive impact on the tense sectarian situation that threatens the coexistence of Sunnis and Shiite communities across the region. Without falling into the trap of glorifying a peaceful coexistence in the past, it is accurate to say that peace between Sunnis and Shiites has only in recent times been shattered completely, under the pressure of regional rivalries. While beleaguered minorities have always been forced to look to outside patrons for protection, the willingness of powerful regional powers to espouse a cause for their own interest has tended to fuel more tension and massacres. It is urgent for the Saudis to understand that sectarian foreign policies are counterproductive. In equal measure, the Iranians cannot lord over the Arab world under the pretext of protecting their co-religionists.

The Arab world will remain a mosaic of sects as it has always been. Whether under the rule of empires or nation-states, this mosaic has endured, with no one group able to eradicate the other. It seems that in the Middle East, there is no room for “final solutions,” although several contestants might entertain such an idea. Religious pluralism will persist as a feature of the region regardless of who rules it.

The only safeguard against pluralism degenerating into sectarian war is an agreement between regional rival powers to refrain from interventions with the purpose of asserting their dominance at the expense of social cohesion and religious tolerance. Only an inclusive and representative democratic system can solve the problem of sectarianism and protect minorities. The current problem stems from neither Saudi Arabia nor Iran being truly interested in such a democratic system at home or nearby. Their intervention in Syria so far has seriously undermined the prospects of a democratic system emerging from the ashes of Syria's cities. Their failure to conceive a democratic Syria has prolonged the misery of the Syrian people and led to perpetuating atrocities. One can hope that destroying Syria's lethal chemical weapons under international supervision promises to be a step toward ending the saga regardless of whether it meets Saudi Arabia's current wishes.