Saudi Arabia Pushes US Toward Military Strike in Syria

Saudi Arabia is advocating for a US military strike in Syria to advance its own regional and sectarian agenda. 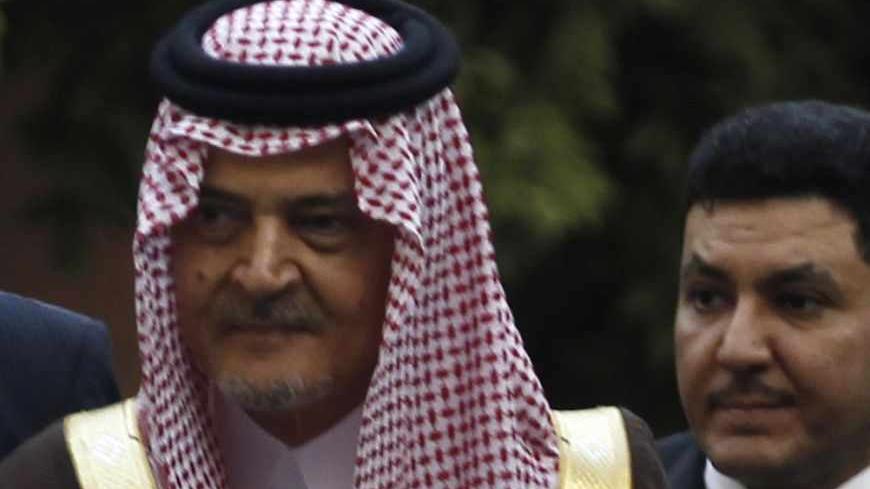 After scoring a victory in Egypt, Saudi Arabia is hoping to achieve the same swift success in Syria, where the struggle between the regime and the rebels seems ever more complex and bloody. If it does, Saudi Arabia will emerge as the main arbiter of Arab regional politics for the foreseeable future. If it does not, its claim to regional leadership will be seriously undermined.

The human cost of the bloody Syrian conflict that was destined from the very beginning to become a regional and international concern is rising by the day. Saudi Foreign Minister Saud al-Faisal urged the Arab League to back a military strike against President Bashar al-Assad’s regime after the chemical attack on Ghouta in which hundreds of Syrians were killed. Faisal said Saudi Arabia would back a US strike on Syrian government targets, provided the military intervention was "the will of the Syrian people."

The Saudis' clear sanctioning of a US-led military strike comes after Arab efforts to back the rebels have not led to a clear victory. The conflict is still claiming lives and there are no signs that the Syrian regime is approaching its final days. A military strike, it is believed, would weaken the military capabilities of the regime, giving the rebels a better opportunity on the ground to erode Assad’s grip on power.

Away from humanitarian concerns over the Syrian victims of chemical attacks, the Saudi antagonism to Assad’s regime started in 2006, when it appeared that together with Iraq, Syria was beginning to drift even more toward the Iranian sphere of influence and away from the Saudi-led Arab position, causing discomfort in Riyadh. Saudi Arabia aims to return Syria to its fold after years of estrangement and even hostility.

Saudi preoccupation with Syria is a reflection of deep-rooted fear of Iran’s rising influence. After giving up on the United States dealing a blow to this influence in the form of a military strike on Iran’s nuclear installations, more than ever, Saudi Arabia feels encircled by Iran from all directions. The Saudi leadership imagines itself surrounded by hostile forces, among whom are the Yemeni Houthis in the south, and Iraq, Syria and Lebanon in the north, all dubbed agents of Iran. The Syrian uprising gave the Saudis an opportunity to undermine the most vital link in the Iranian influence that stretched from Baghdad to Beirut. Defeating Assad became a priority for the Saudi national interest, which so far has taken the form of direct military aid to the rebels and promotion of the Syrian cause in international and regional forums. Nothing would alleviate Saudi fears like a pro-Saudi Sunni government in Damascus, breaking the chain of Iranian influence.

From the Saudi perspective, Washington can redeem itself in Syria if it leads a limited military strike after appearing reluctant to continue its policy of supporting Arab dictators at their darkest moments. It failed to take action in 2011, when its closest ally, then-Egyptian President Hosni Mubarak, faced the first round of revolution, thus reminding the Saudis of how powerless the United States can be when such dictators are under pressure from their own people. Saudis remember how the United States also failed to save the Shah of Iran in 1979 under the pressure of revolution.

Now Saudi Arabia wants the United States to act in order to demonstrate to the Arab public its military might. As the Saudis are still dependent on US military technology and training, the regime is embarrassed by how hesitant its patron in Washington has been over the last three years of Arab uprisings. It is possibly the first time when US national interests do not correspond with those of the Saudis — hence Washington’s tame interventions in recent years and its reluctance to respond to the Saudi desire to strike Iran. It seems that Saudi Arabia may have reached the conclusion that Washington cannot always fight Saudi wars. The Saudis may have to do it themselves, unless the United States moves quickly and launches its missiles on Assad, as wished by Faisal when addressing the emergency meeting of the Arab foreign ministers in Cairo.

The Arab revolutions have been unknown quantities from the first day with no promise that friendly forces seeking democracy will inevitably dominate local and national governments. The Saudis saw these revolutions as malicious and contagious moments that required serious counter-revolutionary measures to tame them or even bury them alive.

The Syrian uprising was the exception, as Saudis saw it as an opportunity rather than an epidemic. With Jordan acting as a buffer zone between Saudi Arabia and the festering Syrian wound, Saudi Arabia was assured that no flow of refugees or other undesirable outcomes would reach its own territory. It poured funds into the rebels’ hands and put in place humanitarian aid.

But from the very beginning, the Saudis wanted the overthrow of Assad. This was clearly reflected in their own obsession with rolling back Iranian influence rather than finding a feasible solution to the Syrian crisis. Assad’s stubbornness and bloody battles across the country raised Saudi hopes that the international community would reach a consensus to overthrow him. This has not happened and even those who are convinced of the merit of overthrowing him do not seem to be willing to act, thus prolonging Saudi frustration over a much hoped-for victory in Syria. Despite its conscientious effort to back the Syrian rebels, the Saudis may well have reached the conclusion that only the United States can do it.

Will the United States respond and make the Saudi dream to become the undisputed master of the Arab world’s destiny come true? Americans need to be convinced that striking Syria is in their own national interest. If this interest corresponds with that of the Saudis, all the better. But if it does not, then Washington may appear to have been dragged into a conflict whose outcome remains uncertain. The Saudi dream may turn into Washington’s nightmare.

Surely a quick military strike will weaken the Syrian regime, but will it lead to its total collapse? What are the forces that will replace it, among whom are several groups that may not be US-friendly, to say the least? Those unfriendly forces are now willing to support a US strike on Assad as they are moved by the logic of calling upon God to engage despots in a war against each other, mainly the United States and Assad, so that a window of opportunity may present itself to the pious and virtuous. Such logic may be lost in translation but it is based on an old political principle: There is nothing more satisfying than watching your enemies kill each other.

The Saudi regime’s insistence on total victory in Syria is misguided, as this conflict has proved to be one of the most devastating in the history of the region and is likely to remain so as long as Assad and his enemies do not tire of blood. If Saudi Arabia has issues with Iran, it should have the guts to deal with them close to home and respect that Washington cannot always fight its wars.

The Syrian people deserve to live rather than be used and abused in a regional conflict with international backing. If the objective is to respect the will of the Syrian people, as Faisal has said, then those people must be allowed to live first, rather than subject them to precision bombing that may not be so precise. A cease-fire under the auspices of the United Nations may be the first step toward halting the massacres rather than seeking an international umbrella for more killing.

Dr. Madawi Al-Rasheed is a visiting professor at the Middle East Centre at the London School of Economics and Political Science. She has written extensively about the Arabian Peninsula, Arab migration, globalization, religious transnationalism and gender. On Twitter: @MadawiDr