Jewelry merchants of the Khan al-Khalili market in Cairo use a secret code that originates in ancient Hebrew to outsmart their (non-Israeli) customers. 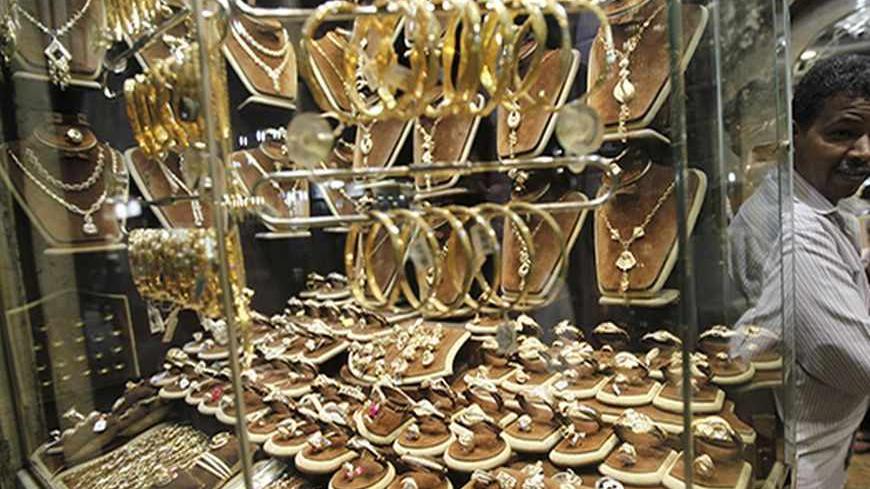 A worker stands in front of his jewelry shop at the Khan al-Khalili market in Cairo, Oct. 10, 2012. - REUTERS/Amr Abdallah Dalsh

An Israeli tourist walking the alleyways of the great market of Cairo, Khan al-Khalili, is bound to hear some familiar words about the price of this or that product or praise of its quality coming from the Egyptian merchants, particularly the jewelry merchants. These words are a secret language that the merchants adopted to outsmart customers, so discovered Israeli researcher Gabriel M‫.‬ Rosenbaum of the Hebrew University in Jerusalem.

After he first heard the Khan al-Khalili merchants speaking Hebrew, professor Rosenbaum decided to research this phenomenon in-depth and discovered a whole new world. It turns out that the origin of the code used by the jewelry merchants dates back to the Middle Ages, when most of them were Karaite Jews.

“When I got back to Israel, I went to Jewish-Egyptian friends and Karaite Israelis. There is evidence of the existence of a Hebrew code among the guild of metalsmiths as far back as a thousand years ago. I cross-checked it at the Khan al-Khalili market and in Alexandria, and I also visited the metalsmiths’ streets in two towns in the Nile Delta, Tanta and Damanhur. I read up on secret languages, and I learned terms from the field of metalsmith tools.”

Thus, for example, in market jargon the word yaffet means "good" or "nice," similar to its meaning in modern Hebrew. The merchants use it to share information about clients who look wealthy or give their opinion of a good product. “The opposite of yaffet is ashfoor,” says Rosenbaum, “a word whose root is unknown, and which does not suggest a Hebrew parallel.”

Some of the merchants use the word zahub, whose origin is the Hebrew word zahav for gold, to refer to one Egyptian lira. When they want to hint to a colleague that he better get rid of a customer, the merchants tell him halakh, or ahalakh, which sounds like halah, the word for "go" in modern Hebrew. Others use the word admoon. It means an "old tool," or a piece of jewelry that was repaired, and that the merchant polished up and shows in his display window as if new. Its origin is in the Hebrew word kadmon, which means "ancient" or "old." In colloquial Egyptian Arabic, the Hebrew letter kof (k) is pronounced as an alef (a silent letter), and thus kadmon became the term admon among Egyptian merchants. The possessive word they use, shal, is also taken from Hebrew. Shali means "in my possession" or "with me," while shalakh means "in your possession" or "with you." But the greatest influence is in the realm of numbers. The merchants and metalsmiths in Egypt’s marketplaces actually count in Hebrew: echad (1), shnayin (2), shlosha (3), shloshin (30), shishin (60), shefin (70), shmonin (80) and so on.

“All sorts of groups have secret languages,” says Rosenbaum, “religious and ethnic groups, criminal organizations, sportsmen, students. Parents speak a foreign language near the kids so they won’t understand them. And there are languages developed for specific purposes such as the language of the professional guild. For the Egyptian merchants the purpose is to set prices or pass information behind the customer’s back. Since it’s been used for secret oral communication, it’s never been written down.”

At first, he says, the merchants were not happy to share their code language with him, but after they understood that Hebrew is his native language and he uncovered their code language, they opened up to him. They know that the strange words that got mixed in with their language originates in Hebrew, from the Jewish merchants. That’s why they call their secret language “Hebrew” or the “language of the Jews.”

“When an Israeli tourist arrives, they don’t use the language because they assume that he would understand it,” says Rosenbaum. Despite this precaution, sometimes failures of identification happen. On one of my visits to the Khan al-Khalili market I met Nader, a jewelry merchant, who told me about a group of foreign tourists who visited his humble shop. “They looked Lebanese, or maybe Armenian, and spoke Arabic,” he recalls. “One of the women approached and wanted a scarf. I said to my partner, ‘That’s shloshin.'” Nader pronounced the price in the Hebrew he knows. “He heard it and told her, ‘that’ll be ninety liras.' She responded, ‘Why? Didn’t he say it was 30?' We were all dumbfounded.”

Rosenbaum regrets that he has not visited the great market in Cairo in such a long time because of the security situation. According to him, the shops close earlier than usual these days, and the famous lively nightlife of Cairo has been curtailed. Rosenbaum, 65, who grew up in Tel Aviv, lived in the capital of Egypt over the last few years and got to know it well, thanks to his role as the head of the Israeli Academic Center in Cairo. The deterioration of the security situation there made him go back to Israel. He returned to his position at the Hebrew University and continued to serve as the head of the center as a volunteer, a nonresident director. Rosenbaum is an expert in the study of modern Egyptian language, theater and folklore, as well as in Egyptian Jews. He translated two classic Egyptian plays into Hebrew: the satire “Saadon the Madman” by Lenin El-Ramly, which was performed several times on Israeli stages, and “The Comedy of Oedipus” by Ali Salim.

The discovery of the presence of Hebrew among the seasoned merchants of markets in Cairo, Alexandria and other cities combines with the great interest in Israel and the Hebrew language seen in Egypt in recent decades. Thousands of Egyptian students study Hebrew in state universities and every self-respecting local paper employs a Hebrew-speaking reporter who can follow current events in Israel. On social networks one can find lively forums of Israelis and Egyptians — such as Medabrim Shalom (Talking Peace) — who talk Hebrew among themselves.

At the same time that Hebrew is being revived, an inverse process is taking place in Egypt: a decline in the presence of Israelis, especially tourists, and the slow extinction of Egyptian Jews from the land. This community numbers only several dozen people today. Rosenbaum remarks that Egyptian Jews have their own dialect, but it, too, will disappear in a few years, with the disappearance of the last of the Jews from Egypt. “The secret language was for many years the language of the Jews,” he concludes, "and today it’s being preserved by non-Jews.”