The restoration project of Cairo’s Bassatine Jewish Cemetery, believed to be the second-oldest in the world, mainly aims at attracting tourism while at the same time shedding light on Egypt’s dwindling Jewish community. 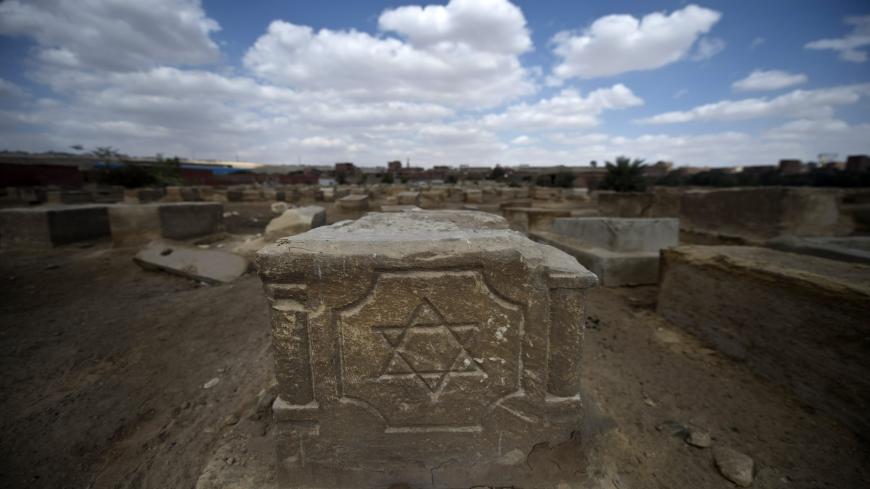 A general view of the Jewish cemetery in Cairo, Egypt, April 18, 2013. - KHALED DESOUKI/AFP via Getty Images

The American Research Center in Egypt (ARCE) and the Drop of Milk association have recently completed a small but significant conservation project in the ancient Bassatine Cemetery of Cairo, believed to be the second-oldest Jewish cemetery in the world. The work, funded by the US Ambassadors Fund for Cultural Preservation (AFCP), also includes the documentation and mapping of what remains of the site.

The project aspires to be the first remarkable step to ensure the long-term sustainability of the site, and is part of the ongoing efforts of Egypt’s tiny Jewish community to preserve and rethink its heritage and highlight the country’s historical and cultural diversity.

“When I [first] visited the cemetery [with a member of Drop of Milk], I was astonished by the diversity of tombs of all different periods of Egypt’s history, and it is unfortunate that very little from the cemetery remains,” Louise Bertini, ARCE’s executive director, told Al-Monitor. “So we thought about what we could do to help document and conserve what is left, and that is when we applied for a US Ambassadors grant.”

Only surpassed by the cemetery at the Mount of Olives, in Jerusalem, the Bassatine Cemetery dates back to the 9th century and lies in the southeast of Cairo. The site was initially built on a plot of land granted by Ahmed ibn Tulun, founder of the Tulunid dynasty that ruled Egypt and Syria at the time, and it was divided into two areas reserved for the country’s Rabbinate and Karaite Jewish communities.

Following the abrupt decline of Egypt’s Jewish community in the mid-20th century, the cemetery of Bassatine entered a process of degradation and suffered substantial damage. This was mainly the result of the negligence of the authorities, the settlement of squatters, the theft of most of the graves’ marble slabs, waste dumping and the construction of a ring road in the south of Cairo in 1988 that split the cemetery in two. From the 140 feddan (145 acres) that the cemetery once was, only around 37 feddan (38 acres) remain today.

The disaster for the cemetery was first averted in the late 1970s, when Carmen Weinstein, leader of Cairo’s Jewish community from 2004 to 2013, hired a guard to protect the site, according to the International Jewish Cemetery Project. In 1991, a wall surrounding the remains of Bassatine was finally erected thanks to funds from the World Sephardi Federation and the Hassoun Group. Yet the lack of a comprehensive plan for the place left the site vulnerable, and following the revolution on Jan. 25, 2011, squatters started to demolish parts of the wall in order to take land and build on top of it again.

“The efforts to keep and restore the site only started with Drop of Milk in 2017,” Samy Ibrahim, a member of the association involved in the project in Bassatine, told Al-Monitor.

Today, the remains of the cemetery consist of two parts, Bertini explained. The first is a large single cemetery with up to seven layers of burials composed mostly of simple tombs dating from the last century in an area of approximately 5 hectares (12 acres) to the north of the Ring Road. The second, to the south, is a cluster of smaller, walled enclosures containing the graves of many elite Jewish families of the 19th and 20th centuries.

In this context, the US Embassy in Cairo announced in January that AFCP, which had previously funded other projects to preserve Egypt’s archaeological and cultural heritage, granted its latest fund to the conservation of Bassatine. The Egyptian government has also recently started to take action to document and protect the country’s Jewish heritage.

“The Bassatine Cemetery is increasing the world’s understanding of Egypt’s Jewish cultural heritage,” said Jonathan R. Cohen, US ambassador to Egypt, at a public lecture on the preservation of Jewish-Egyptian Heritage organized by ARCE on Sep. 13, to present the results of the project.

The project, which started in January, was divided in three parts, Bertini said. The first two, set to be finished by November, include the documentation of what remains from the cemetery and the development of a site management plan, the first of its kind.

The third one, completed in July, included a partial conservation of the Karaite cemetery. This covered the graveyards of the Menasha and Leishaa, two prominent families of the Jewish community that owned two small and walled plots of around 460 square meters (4,950 square feet), each one containing one room for family gatherings to commemorate the death and an additional mausoleum in the case of the Menasha family.

“We decided to start with the Karaite cemetery because [it] is the most accessible part of the cemetery and also because the Karaite had a very interesting story to tell,” Bertini said. “In a way they were very Egyptian in their beliefs and practices, and their synagogues are very similar to mosques. And in this cemetery in particular many of the gravestones are written in both Hebrew and Arabic.”

“There are other parts of the cemetery that we would love to conserve,” she added, “but we are hoping to get more funds to continue the process.”

Yoram Meital, professor of Middle East Studies at Ben-Gurion University, said during the public lecture, “While no Karaite Jew is left in Egypt and only a few Karaite sites remain in Cairo, studying their rich architecture can shed light on [the community].”

He continued, “The interior and exterior designs of Karaite synagogues and cemeteries, and the items and symbols that were integrated into them, contain rich information about the cultural affiliation of these native Egyptian Jews, their rituals and their habits.”

ARCE is currently preparing bilingual illustrated visitors information panels that will be installed in the gathering room of the Menasha graveyard with information on the Karaite.

Ibrahim noted that the conservation work is an important first step, but also said that “people think we have now finished, when this [project] only covered a small portion of Bassatine.”

Drop of Milk plans to ensure the sustainability of the site by developing the cemetery in order to attract tourists to the site and to engage the local community.

“In 10 to 15 years perhaps not a single Jew will remain [in Egypt] and ARCE is looking into the place from a restoration point of view. But this is not enough,” Ibrahim concluded. “If we want to secure this place in the future, we need to interact with the community, because otherwise they will wait for the first chance to jump in again. We need to integrate them and bring services to them, so that they understand that this is a site that brings revenues to the place.”