Egyptian authorities have begun a process to register and protect Jewish cemeteries and synagogues after decades of neglecting them. 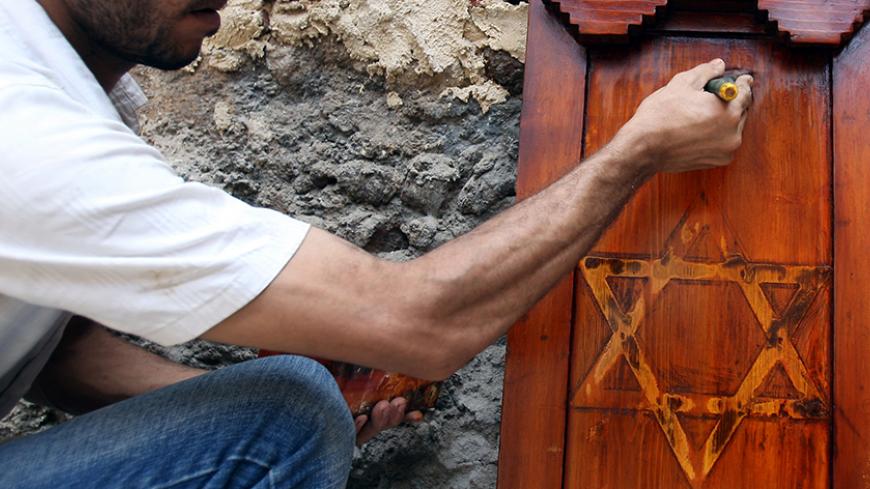 An Egyptian worker carries out restoration work at Moses Maimonides Temple, the first Jewish temple to be built in Egypt during the 19th century, Cairo, Aug. 20, 2009. - REUTERS/Amr Abdallah Dalsh

CAIRO — Saeed Helmy, head of the Islamic, Coptic and Jewish Monuments Department at the Egyptian Ministry of Antiquities, told Al-Monitor that three Jewish cemeteries had been registered with the ministry on April 26 in the areas of al-Shatby 1, al-Shabty 2 and Azarita, in Alexandria governorate. Speaking by phone to Al-Monitor on May 4, Helmy also said that a synagogue at one of the cemeteries had been documented and registered, which would make it an official historical site under the Antiquities Protection Law no. 117 of 1983 and require the ministry to assume responsibility for it.

The registrations are the first such moves in regard to Jewish heritage sites following decades of neglect. After the 1948 Arab-Israeli War, more than half of Egypt's approximately 80,000 Jews left for Israel. Today, only six are thought to remain. According to the Ministry of Antiquities, only 11 synagogues are still intact, 10 in Cairo and one in Alexandria, and they contain thousands of books on the Jewish community in Egypt as well as birth and marriage registers.

Helmy told Al-Monitor that some of the graves in the registered sites are 170 years old. He further said of the cemeteries, “They include communal graveyards for the working-class people without any identification information. They also include marble mausoleums for rich people and Jewish officials and rabbis. These are well organized and include the full names of the buried Jews. The [registered] synagogue contains a number of artifacts and manuscripts that document the Jewish community in the country.

“These cemeteries are of great significance and cannot be overlooked, because they represent an important era in Egyptian history. They are characterized by their unique, elaborate decorations, as they resemble the small temples built by the Jews in Egypt. We admit that these cemeteries have been neglected for years, even for decades. This step [of documenting them] was long overdue and should have taken place years ago.”

Numerous Egyptian monuments, including Jewish ones, face neglect and attempted thefts. The threat grew after the 2011 revolution and the ensuing security chaos, declining tourism and deteriorating economy. This situation prompted Magda Haroun, head of the Jewish community in Egypt, to appeal to President Abdel Fattah al-Sisi in March 2016 in a Youm al-Sabeh article to intervene to save Egypt's Jewish heritage by documenting and restoring Jewish monuments. Although Sisi did not respond, help apparently arrived from other quarters, including Khaled al-Anani's appointment as minister of antiquities that month.

“Under Anani as minister of antiquities, the Jewish heritage has been accorded remarkable attention. Indeed, he decided to form a committee to document Jewish monuments in Egypt in preparation for their registration. This had never happened before,” said Helmy. “On May 22, 2016, Anani issued a ministerial decree to count and list Jewish antiquities, based on the instructions of Prime Minister Sherif Ismail, who emphasized the need to pay particular attention to Jewish monuments.

“The committee that was established to count Jewish antiquities is working round the clock to execute its mission across Egypt with the objective of registering all documented Jewish temples, cemeteries or synagogues. In the coming period, the ministry is expected to register the Jewish cemetery in the Basateen district, one of the most important Jewish cemeteries in the world.”

The graveyard at Basateen, southeast of Cairo, is the second oldest Jewish cemetery in the world, behind the cemetery on the Mount of Olives in Jerusalem. It dates to the 15th century, covers an area of 120 feddans (1 feddan = 4,200 square meters) and suffers from severe neglect. It is strewn with litter, and parts of the wall surrounding it have been destroyed. Neither the Ministry of Antiquities nor the security forces has yet assigned personnel to guard the site, as required by article 29 of law 117.

Helmy added, “Registration [of sites] can take some time. It is not as easy as some believe. The committee formed to count Jewish cemeteries in Alexandria examined the graveyards more than once, described them and recorded the relevant data. The six-pointed Star of David [in metal] was then placed on each grave.

“Going forward, these cemeteries will be subject to the Antiquities Protection Law, amended for the first time by the parliament following the January 25 Revolution to curtail thefts at archaeological sites. This means that the cemeteries are subject to supervision, protection and follow-up by the Antiquities Ministry’s assigned inspectors to protect them from theft and neglect.” On May 3, the Council of Ministers approved a draft law amending for the second time certain provisions of the Antiquities Protection Law to ensure the required protection for antiquities and provide for harsher penalties to deter looting and smuggling.

Helmy said, “These cemeteries are part of Egypt’s heritage on Egypt’s land and should not be neglected regardless of the situation in the country. I want to send a message to the world that Egypt has priceless artifacts and treasures. These treasures are a public treasure. The Egyptian antiquities should be well taken care of in order to preserve and protect Egypt’s heritage and treasures. The Egyptian state would have to allocate huge funds to secure and protect its antiquities. This is difficult to achieve in light of the current economic downturn.”