US Attack on Syria Will Achieve Nothing

US attack on Syria will backfire on the Obama administration and Israel, awaken nationalism within the Syrian people and strengthen President Bashar al-Assad. 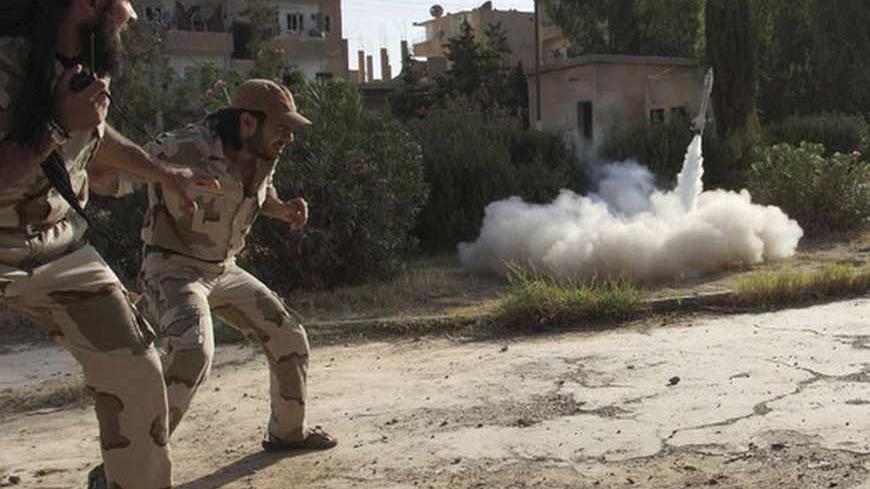 Members of the Free Syrian Army react as they fire a homemade rocket toward forces loyal to the Syrian regime in Deir el-Zour, June 16, 2013. - REUTERS/Khalil Ashawi

To attack or not to attack — that is no longer the question. US President Barack Obama, despite the opposition of public opinion in his country, is obliged to launch an attack in Syria because Syrian President Bashar al-Assad has long since crossed Obama’s unequivocal red line. One chemical attack in a Damascus suburb has shocked the world much more than the 100,000 people who have fallen in the bloody Syrian battlefield to date.

The fundamental question to be asked now is: What does the United States intend to achieve by a military strike? Does it have an objective other than showing that Obama is a man of his word? An American assault might be limited to a single blow. Or it might consist of a series of assaults on strategic targets such as a chemical weapons factory, arms depots or even an assault on the presidential palace in Damascus in order to deter Assad. The result in any case will follow accordingly. Assad will emerge from his hideout to announce to whatever is left of his nation that he will not yield to predatory American imperialism on Syrian land.

Under such circumstances it is very likely that Israel’s name will also find its way onto the list of those who connive against Assad, those who try to divide and destroy his country. Several days after such an assault, hundreds of thousands of Syrians will conduct demonstrations in support of their leader. They will protest the fact that the Americans and their partners join hands with the rebels to oust their president, who is fighting for his life and for the liberty of his country.

Such an assault will not achieve a thing. Syrian citizens — those not involved in the fighting and who do not live at the sites of Syrian army battles and war crimes — will unite around their president. This is a well-known phenomenon during times of crisis: Civilians put aside inner tensions and dissent to unite against a common external enemy. We can also assume that a large portion of Syria’s citizens who viewed the harsh pictures from the chemical attack are convinced that it was nothing short of fraudulent propaganda on the part of the rebels.

This argument has already seen the light of day in Syrian blogs, several of which espouse a completely different narrative from the one we all are familiar with. As far as they are concerned, Syria is now fighting for its life, its future and its very essence. It is fighting heroically against the great forces of evil that are impelled by unmistakable imperialistic interests. In their view, this is what transpired in Egypt, after former President Mohammed Morsi was overthrown; this is also what happened to Libyan leader Moammar Gadhafi in Libya, and this is what happened in Tunisia. Now, they believe, it is Syria’s turn to pay the price for its independence and liberty.

This interpretation of the events does not come from regions such as Homs, Hama, Daraa and other epicenters of battles that have felt the evils of the Assad regime, but from sections of Syria far from the battlegrounds. An assault by the United States or any Western coalition is likely to strengthen such an interpretation. Thus the important question is whether, in addition to a military strike, Obama also intends to implement a strategic plan to banish Assad and deal with the leadership vacuum that will remain. The collective American memories of Iraq and Afghanistan are still fresh, and so are the lessons learned from the deposing of a regime, however brutal and insane as the regime might have been.

On one hand, a country that views itself as the “world’s policeman” has a moral responsibility to depose evil, murderous regimes and support their replacement with suitable governments. On the other, such a step involves, in most cases, dealing with the murderous terrorism of extremist Islamist groups. The situation in Syria is not likely to be much better; in fact, it may even be a great deal worse. Regarding the lack of unity among the rebel forces against Assad, almost everything has already been said. The armed rebels are splintered and at odds with one another and have been infiltrated, in the last  2½ years, by armed Salafist extremists. These Salafists dream about establishing an Islamic caliphate and exploiting the chaos in the country to promote their goals. These cells have already blocked American and European aid to forces fighting against Assad.

We can assume that the American moment of truth — of whether to depose the Syrian president — has not yet arrived. The United States will probably take action together with a coalition of countries (excluding Israel, so as not to arouse extreme opposition in the Arab world). This coalition will assemble a joint international alignment and conduct a series of surgical strikes. The news broadcasts will cover the attacks, retired generals will provide wise commentaries and that will be the end of that. At this point, it is rather difficult to envision American Marines landing on the roof of Assad’s palace, extracting him from his comfortable bed and bringing him to trial in the Hague.

The crucial moment to depose him and bring him to judgment has not yet arrived. It’s not that he doesn’t deserve to be tried as a war criminal. The problem is that no leader has emerged in Syria who is capable of taking the entire country into his hands and halting the bloodshed.

Alas, this is very regrettable. We would have expected that in the 21st century, a leader who massacres his citizens would be brought to trial immediately. What a pity for the Syrian civilians, who will continue to count more and more of their dead.