Israel Should Be Part Of Coalition Against Syria 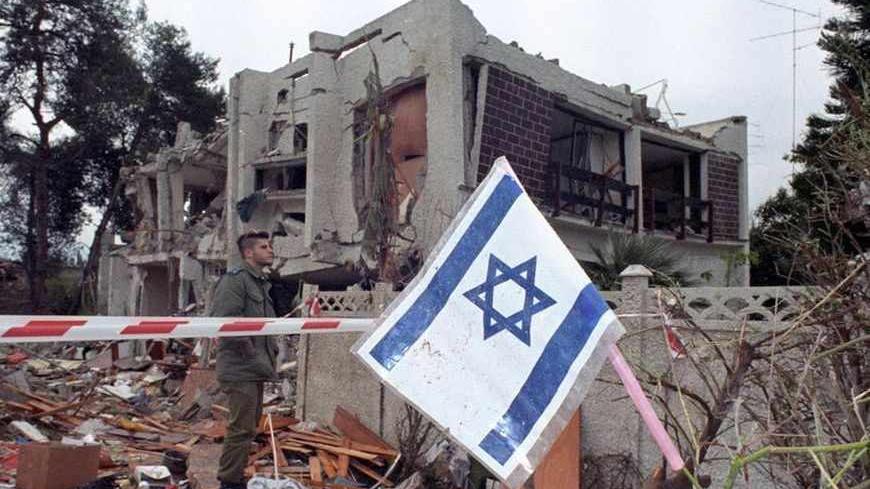 An Israeli soldier inspects a building after it was destroyed during an Iraqi Scud missile attack, Jan. 26, 1991, that killed at least one person and wounded 69. - REUTERS/Ulli Michel

“President Obama believes there must be accountability for those who would use the world’s most heinous weapons against the world’s most vulnerable people,” US Secretary of State John Kerry declared Aug.26. ''The president has asked the Defense Department for options … for all contingencies,''  Secretary of Defense Chuck Hagel said Aug. 23. And the countdown begins.

As it usually does before launching such military operations, the United States is trying to put together an international coalition designed to punish Syrian President Bashar al-Assad. It will do this to show that the whole world is concerned about what happened in Syria, and not just the Americans, and that the international community at large is horrified by the war crimes occurring in that country.

It is quite reasonable to assume that some of the countries in the new coalition will have participated in the two campaigns against Saddam Hussein in Iraq. During the first Gulf War [1991], President George H.W. Bush put together a force of almost 1 million troops from 31 countries, including soldiers from Syria. Even if most of the troops were actually from the United States and Britain, there was a sense that the whole world had joined forces against the Iraqi dictator. During the second Gulf War [2003], in which Saddam Hussein’s regime was toppled and he was captured and later executed, the US-led coalition consisted of troops from 30 countries, including Tonga Island and Moldova. Those latter two states may have sent just a few dozen troops each, but they put their name behind the international effort, and that was enough.

Both Bush the elder and President George W. Bush wanted to show that there was a unified global front prepared to fight against totalitarian dictatorships and in support of world peace. At least that’s how it looked back then. Only Israel, which was attacked by hundreds of Iraqi Scuds, was asked to stay out of the campaign. Both American presidents believed that the Israeli Defense Forces' participation in the war would cause their broad coalition to crumble. “We’ll get the job done. You can trust us,” promised the coalition's commander-in-chief Gen. Norman Schwarzkopf during the first campaign (which was aptly named “Desert Storm”). Then Prime Minister Yitzhak Shamir was forced to bite his lip and follow the president’s orders by refusing to retaliate. The same scenario repeated itself during the second Gulf War (“Iraqi Freedom”).

The attack being planned against Syria will not require the Obama administration to cobble together an extensive coalition that will take part in some large scale military campaign. Based on what Kerry said, it looks as if the American response will consist of a series of limited, punitive strikes. Secretary of Defense Hagel made it clear that the US is ''prepared … to provide ranges for all contingencies.'' These statements by him and Kerry were intended to send a message, not only to Assad and his regime, and not only to the people of Syria, but to the entire free and sane world that in the 21st century, one can still find morality and compassion — to motivate troops to defend the lives of innocent civilians and protect them from being slaughtered.

That is exactly why Israel now has a moral obligation to be part of the international front being formed to punish Syria for its horrific war crimes. There will be those who argue that Israel’s participation would jeopardize the American coalition. While Prime Minister Recep Tayyip Erdogan of Turkey, for example, may have been waiting for two years to strike back at his Syrian nemesis, he will nevertheless refuse to cooperate with the Israeli air force. Others will claim that Israeli involvement in the melee will only provide Assad with the justification he needs to expand the narrow confines of this conflict and turn it into a regional war.

The answer to that is simple. Israel has the right to be part of the family of nations taking part in the fight against atrocities and war crimes. Israel has an experienced rescue team that participates in missions around the world, saving the lives of the victims of earthquakes and other natural disasters. It did that in Haiti, in Turkey, in Japan and in many other countries. It also has the right to demand not to be excluded like some pariah, especially given the Syrian threat to rain missiles down on it. But above all, this would be Israel’s way of telling the families of the victims in Damascus that its people were also shocked by the indiscriminate murder of civilians by gas, especially given how profoundly reminiscent this was of what happened to the Jews during the Holocaust.

President Barack Obama, Hagel, Kerry and other senior officials in Washington trying to put together a coalition against Assad must understand that plenty of water has flowed down the Tigris and Euphrates rivers since the Gulf wars in Iraq finally came to an end. The Middle East has been the stage for vast national and social revolutions, so that it is impossible to convince millions of Muslims worldwide that an attack on Syria is the result of some joint American and Zionist conspiracy.

Images of the casualties of the chemical weapons used in the suburbs of Damascus have already been broadcast by all the major satellite networks. It can be assumed that the people of Egypt, Saudi Arabia, Kuwait, Jordan and the other states of the Middle East realize that the regime in Damascus is killing its own people indiscriminately, without so much as batting an eyelash. In other words, an attack against Syria is not part of some imperialistic enterprise or the settling of old scores. Once the evil regime is finally deposed, and it will apparently happen one day, the people of neighboring Israel will be able to say with pride, “We did not shut our eyes and stand idly by. We took steps to protect the lives of our neighbors, who were being slaughtered by a ruthless leader.”

During the Gulf wars, countries like Moldova and Tonga Island sent a few dozen soldiers each just to lay claim to having participated in the overthrow of Saddam Hussein. Similarly, the participation of a few Israeli fighter jets could provide moral satisfaction for Israel, which, like any other country in the world, is crying out in horror at the cold-blooded murder of men, women and children by gas.