Putin Wins Big in Syria, With Assist From Obama

President Barack Obama's threat to use force against the Syrian chemical arsenal paved the way for the initiative by Russian President Vladimir Putin and maybe a solution. 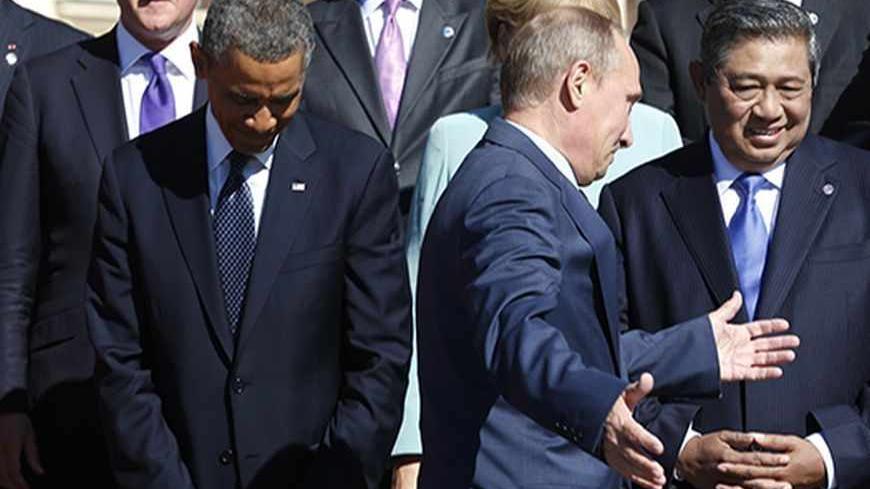 Russian President Vladimir Putin holds out his arms as he walks past US President Barack Obama (L) during a group photo at the G-20 Summit in St. Petersburg, Sept. 6, 2013. - REUTERS/Kevin Lamarque

It's difficult for me to admit it, and it’s not easy for me to write it, but Russian policy on Syria has the one-up on American policy. Although it is convenient to welcome the final outcome, I still find it hard to congratulate Russian President Vladimir Putin and his foreign minister, Sergey Lavrov, on their policy, which blindly backed and supported Syrian President Bashar al-Assad all along the body-strewn way.

When the horrific images of dead civilians filled television screens around the world, Russia claimed that it was a provocation on the part of the rebels. When chemical weapons were introduced to the fighting, killing 1,400 people, a quarter of them children, the Russians brazenly argued that there was no evidence that Assad was the culprit responsible for the horror, and that most likely, the rebels were the ones who had made use of the banned weapons, unleashing the deadly sarin gas against civilians, to induce the international community to step in and bail them out of the series of losses they had recently suffered on the battlefield.

When Assad was about to lose control and his army was on the verge of collapse, the Russians assured him of their full support and armed him to the teeth. The alliance between Putin and Assad was apparently so important that the Syrian president was guaranteed a supply of advanced anti-aircraft S-300 missiles, which Israel regards as a major threat and a game-changing weapons system.

Israeli Prime Minister Benjamin Netanyahu traveled all the way to Moscow half a year ago, in May 2013, in a desperate, and it should be said, even naive attempt to plead with Putin to call off the deal. Indeed, one may wonder how it could be that Netanyahu failed to realize that it was a waste of time and that his trip to the Kremlin was a hopeless mission. How could he believe that he had the power to move Moscow off the track of its blind support for its only remaining ally in the Middle East? How could he possibly hope to change the Russian policy of steadfast support for Assad to which Moscow adhered even when President Barack Obama raised his fist and threatened to beat it?

Had Putin shown even half the indecision with regard to Syria, in comparison to President Obama's full-scale indecision, Assad would have been ousted from his Damascus palace long ago. Alas, the politics exercised by Washington is far removed from the politics of Moscow, and hesitancy, indecisiveness and wavering over moral questions play no role in the set of considerations that guide Putin and Lavrov. Obama vacillated, got mixed up, lost momentum and opened the way for a global debate on issues of morality, the use of chemical weapons and the role of the superpowers as guardians of world peace and the welfare of citizens.

At the same time, the United Kingdom, Turkey, the Arab League and France entered the debate, each with its own position and demands, each pulling in a different direction. Germany, whose leaders opposed the attack, even leaked to the international media reports by intelligence sources concerning messages transmitted from Assad's palace. All the world's a stage, and Assad, the aggressor, has become the victim. And then, a rabbit is pulled out of the hat — a Russian initiative according to which Assad will agree to international supervision of his chemical weapons arsenal followed by the dismantling of the weapons to prevent an attack.

But wait. Hasn’t it been argued that it isn’t Assad, but rather the rebels who made use of chemical weapons to kill 1,400 civilians? Well, that all seems to be irrelevant now. At this point, which is apparently the last phase of the game, everyone is confused, and all sorts of arguments are being made. It is worth noticing the suggestion to grant Assad another period of grace, while putting his arsenals of chemical weapons under supervision and dismantling all chemical weapons in his possession. It is, in fact, the best solution that could be reached — and one to which even Obama cannot object.

Had Iran been willing to accept a similar deal and allow monitoring of its nuclear program and the subsequent dismantling of its nuclear facilities, even Netanyahu would have applauded the move and warmly embraced the initiative, which could have removed a major global security threat. Thus, whether we like it or not, we cannot but acknowledge that Putin has twisted Obama’s arm and even congratulate the Russian president on it.

Let’s face it, the Russian initiative is creative and sophisticated. Yet, all those who believe that the use of chemical weapons is taboo and should not be passed over in silence may be reminded that the threat to use force has eventually proven effective. At the end of the day, nothing would have happened had Obama not threatened Assad. The Syrian president would have never given his consent to international supervision had he not realized that the rope was wrapped around his neck and that he had no way out.

And there is another important point to be made. Obama admitted that he had no intention of dispatching ground forces to Syria to embroil the United States in another war and that he was not planning another round of hostilities in the style of Afghanistan or Iraq. The planned American blow was intended to punish Assad and to warn him against the ongoing horrible massacre of his own people that he has been committing. No airstrike against Syria, however, even an aerial offensive lasting 90 days — three times longer than the US Congress was asked to approve — could have changed the picture. Assad would have survived, and most likely, would have stopped fearing the unknown since the attack would then be behind him.

Be that as it may, at the moment, Assad is clearly in a panic and has thus agreed to the deployment of international forces in Syria to monitor the chemical weapons produced in his country. Has he learned his lesson? Has Obama's deterrence succeeded? Well, the answer is obvious.

And, yes, Putin, demonstrating level-headedness and determination, has emerged as the big winner of the recent Syrian crisis. Still, Assad could not have been intimidated and would not have succumbed under pressure and promised to behave himself had it not been for the threats directed at him by the “cop of the world.”