Senior Israelis wonder what it means for US policy toward Iran that US President Barack Obama did not act on a "smoking gun" in Syria. 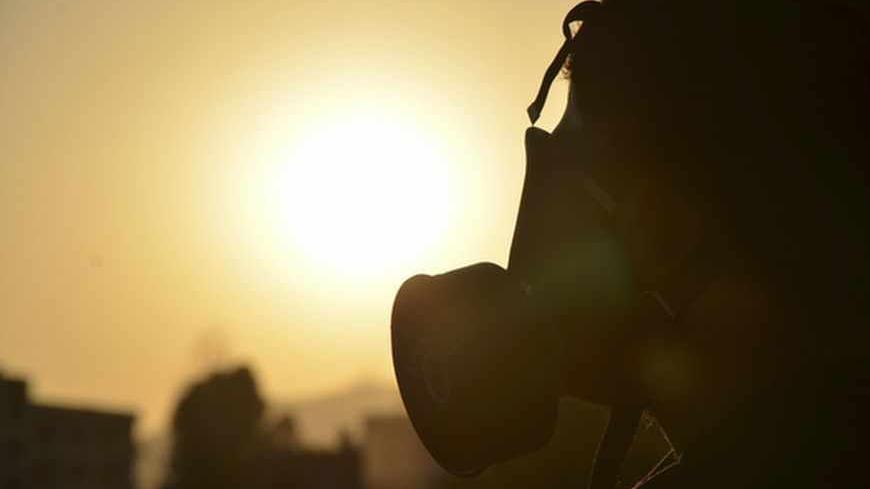 An activist wearing a gas mask is seen in Zamalka area, where activists say chemical weapons have been used by forces loyal to President Bashar al-Assad in the eastern suburbs of Damascus, Aug. 22, 2013. - REUTERS/Bassam Khabieh

A gloom-and-doom atmosphere has started to settle on Israel in light of what’s happening with the Syrian issue. ''The Russian initiative,'' a highly placed Israeli diplomatic source well involved with the goings-on told me yesterday [Sept. 10], “is, at the moment, in complete coordination with the Americans. [President] Obama has aligned himself with the Russian initiative, and [Secretary of State] John Kerry’s meeting with Sergey Lavrov is supposed to synchronize the entire event.”

Many people in Israel feel that the United States has declined the French proposal to take the case to the Security Council, in coordination with Moscow, under the assumption that a Russian veto would scuttle the idea from the beginning. Now, the Israelis reckon, the Americans hope to reach joint guidelines with the Russians regarding full neutralization of chemical weapons in Syria. “What the Americans don’t take into consideration,” they say in Israel, “is the fact that such an initiative can take long months, and the Syrians can knock it down any time. If they suddenly decide to overturn it in seven months, let’s say, will anyone even remember that Obama intended to execute a military operation in Syria?”

The Syrian business worries the Israelis less. Israel knows how to live with chemical weapons in Syria, and if the incident ends with neutralization of these weapons, this will be an important net gain for Israel. But what really disturbs the sleep of Prime Minister Benjamin Netanyahu these days is the question: What do the proceedings regarding Syria forecast about future American conduct regarding Iran?

“If Obama raises the bar this way for a minor assault that has no potential for entanglement and no significant economic price tag, what will happen when he faces the necessity of doing something about Iran?” they ask in Jerusalem. “After all, an attack in Iran will set the whole Persian Gulf on fire, sharply raise the price of oil, and in general extract a heavy and immediate price. Now, he’ll have to go to the Congress for that scenario as well, and it’s very hard to assume that Congress will approve. How will Obama pay such a price, when he is not able to pay the negligible price of an operation he decided to execute in Syria?”

The question remains suspended in midair even when I remind my sources that the Iranian issue is entirely different. Even Obama took the trouble to call Netanyahu himself and tell him wholeheartedly that “Iran is not Syria.” In regard to Syria, I say to my Israeli sources, it is very hard to prove that Syria poses any kind of threat to America or American interests. Syria appears far-off and irrelevant. But in regard to Iran, the entire world realizes that ballistic missiles with nuclear warheads in Teheran will endanger not only Israel but also Europe, the West, America and the free world.

My knowledgeable and annoyed sources nod their heads but add, “Yes, but Obama had a smoking gun in Syria. He had appalling photos and video clips, and clear evidence. In the Iranian issue, it is doubtful that he will have such things.”

This issue will remain open in the following weeks and even months. Benjamin Netanyahu will probably address the issue in his speech to the UN General Assembly later this month. But let me take a minute to dwell on the so-called “smoking gun” that the Israelis refer to, as do almost all the espionage and intelligence organizations in the West. Almost everyone considers it fact that Syrian President Bashar al-Assad, or at least Assad’s regime, gave the order and executed that horrific chemical attack on Aug. 21, an attack that led Obama to climb to the very top of the tree to which he now clings.

This week I met with an unofficial Israeli source with a background in IDF’s intelligence branch, though that was quite some time ago. The man is not connected to the updated intelligence milieu and does not receive information from official intelligence sources. He is a high-tech person with many achievements and great experience in that field. He developed methods for comparing and cross-checking information, methods that have mainly proven themselves when hundreds, thousands and tens of thousands of sources are involved. He wrote a document that rebuts one by one the claims and evidences by which the Assad regime is held responsible for the use of chemical weapons on Aug. 21 in Syria.

The formative concept is simple: There is evidence that there was a chemical attack on Syrian soldiers in Khan al-Assal in March. A Russian commission of inquiry dealt with this, and there are quite a few experts who think that this actually took place. Who can prove to us that the more recent and severe incident in August did not involve an attack by one of the extremist rebel groups on another rebel group? According to my source, most of the complaints and reports on the ground, from the mouths of the victims or their relatives, describe chemical gas characteristics that do not typify sarin, the gas used by the Syrian army. Sarin does not have the yellow color or odor as described in the complaints; in fact, sarin is odorless and tasteless. By contrast, these characteristics could fit the kind of nerve gas produced in an improvised facility and then used by groups affiliated with al-Qaeda activity in Syria. It is possible.

My source adds a long list of details, proofs and supporting evidence. He feels that the intelligence description of the measures taken by the Syrian army before the attack (such as donning gas masks), the orders heard on the two-way radio, the region from which the missiles were fired, etc. — all these do not prove anything. Western intelligence organizations collect thousands of new data from Syria every day. In this jumble of information, you can always find whatever you are looking for: this or that directive given, this or that shooting. This kind of evidence is circumstantial.

Since the Syrian army is also concerned that the rebels may have chemical weapons, it is logical that they would adopt countermeasures in certain situations. According to my source, the initial testimony about the use of gas arrived from the field only an hour and a half after the Syrian army’s shelling of the site. This makes no sense, he says; when such a thing happens, the first Twitter message appears almost immediately, or a quarter-half hour later at the latest. In our instance, it took more than an hour and a half, so that this fact definitely supports the “alternative theory” option.

I asked him, what is a possible alternative theory? He said, Let’s say that a rebel group like Jabhat al-Nusra (affiliated with al-Qaeda), or the ISIS organization (Islamic State of Iraq and Syria, also affiliated with Sunni extremists), wanted to hit the Free Syrian Army (FSA). They could have exploited the Syrian army bombardment to launch a gas bomb on the same neighborhood, under cover of Assad’s shelling.

And by the way, says the source, the neighborhood that was attacked is considered to “belong” to the FSA, the key opposition organization. In such a situation, he explains, the extremist rebels win on all counts: They strike their competitors and also galvanize America into military action against Assad, finally. This is a classic win-win situation, and from the huge amount of evidence that I accumulated, I can’t say that it is totally illogical.

In addition, adds my source, Assad would have to be totally detached from reality or be a Shiite suicide bomber to use such large quantities of chemical weapons and in such intensity, precisely when the rebels are weakening and he is gaining momentum. It seems to me — he says — like a classic “false flag” instance: when an operational tactic is executed by a certain party, but attributed to another party whether intentionally or accidentally. I suggest we wait patiently until the UN inspectors complete their report; perhaps it can illuminate the situation more precisely, so says my source.

I took the data from my source and presented it to Israeli intelligence people. They scornfully brushed it all aside. They claim that Intelligence has in its hand enough evidence to prove beyond the shadow of a doubt, that the chemical attack was perpetrated by Assad’s government, in premeditated cold blood.

I tend to believe the intelligence people, especially because the Israeli intelligence establishment is not alone in its views, but receives backing from all the other Western intelligence agencies. Nevertheless, let us remember that in three more days we will mark the 40th anniversary of the Yom Kippur War, one the harshest traumas undergone by the state of Israel in modern history. The country was taken by surprise in that war and almost destroyed by its enemies, only because its intelligence was fixated on an erroneous “concept” [an assessment that the Arab countries would not attack Israel.]

Therefore, the logical conclusion is that sometimes it is worthwhile to carry out one more inquiry before formulating a final position. It’s not that I am now convinced that Assad is innocent. It’s that now I am a little less convinced that the hands of the Syria president were involved in the chemical attack on Aug. 21.