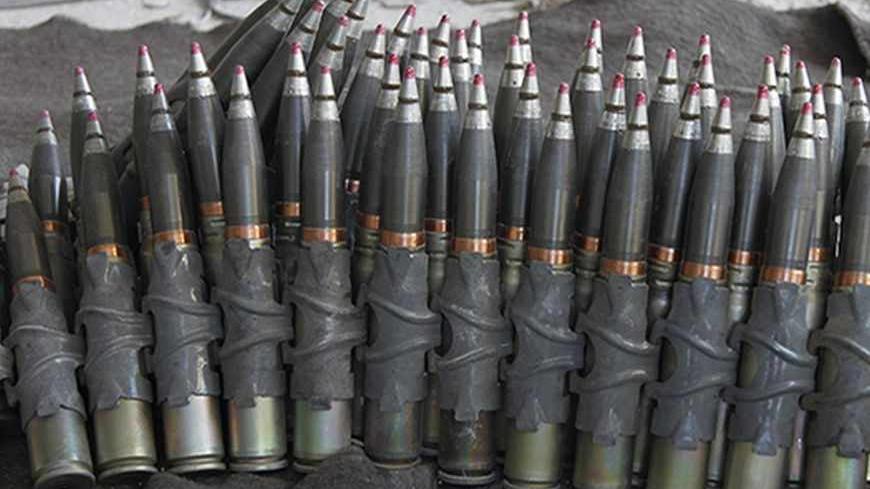 Ammunition is seen at an area controlled by forces loyal to Syria's President Bashar al-Assad in the Damascus suburb of Jobar. Syrian state television said soldiers found chemical materials in tunnels that had been used by rebels, Aug. 24, 2013. - REUTERS/Khaled al-Hariri

In Syria, it all started as it did in other Arab Spring countries. The Syrian people rose against the Baath regime and the Assads, who have been running the country for more than 40 years. But in a short time this uprising turned into a violent sectarian war that was actually shadow boxing by regional countries. One of the striking peculiarities of the civil war in Syria is the perpetual crimes against humanity and violations of international law both by groups calling themselves “opposition” and President Bashar al-Assad’s regular army and shabiha paramilitary groups. Some human rights organizations, such as Amnesty International, are systemically recording these crimes committed by both sides.

With the chemical weapon attack around Damascus on Aug. 21 that killed more than 1,000 people, attacks against civilians have assumed a new dimension. We all know what transpired after that attack, with Syria coming to the threshold of being bombed by an international coalition. With Russia entering the picture and Assad’s subsequent promise of giving up his chemical weapons, an intervention against Syria seems to be off the agenda.

But the question who was behind the chemical attack still remains an unanswered question. Those who claim the attack was by Assad’s forces say he has ample supplies of chemical weapons, that his forces had earlier used chemical weapons and that only the government has the technological means to fire those chemical weapons.

President Barack Obama, in his Sept. 10 address to the nation, categorically stated that the attack was carried out by Assad’s forces. He said there was a chemical weapons attack that included sarin gas in the same area and the attack had started immediately after regime soldiers were issues gas masks. The rockets were fired from positions controlled by the regime, he added.

Those who claim that the "opposition" was responsible for the attack question why Assad’s forces should fire those weapons when they were getting the upper hand in the war, and particularly when UN inspectors were in Damascus only 5-6 kilometers [3-4 miles] from the target area. For them, the attack was carried out by the opposition to provoke an external intervention against the regime. For example, the Russian Foreign Ministry in a statement on Sept. 4, based on observations of Russian experts, said the chemical weapons were fired by a group calling itself “Bashair An-Nasr” and the explosive hexogen was used, which was not in the Syrian army inventory.

It appears that this debate is going to continue until definite proofs are found. Although nobody doubts that the Assad regime has abundant stocks of chemical weapons, claims that the opposition also has chemical weapons have reached an intensity that can’t be ignored.

A member of the UN investigation commission, Carla Del Ponte, said in May “strong, concrete suspicions but not yet irrefutable proof” existed that the opposition had used sarin gas.

An investigation in progress in Turkey and a court case brought by prosecutors in Adana province in south Turkey also indicate that the Syrian opposition was making efforts to produce chemical weapons. According to an indictment by an Adana prosecutor dated July 22, Syrian national Haytham Qassab —  who has connections with Ahrar-i Sham and Jabhat al-Nusra in Syria — along with four Turkish citizens he was working with, tried to obtain the elements needed for production of chemical weapons from a variety of sources.

The 130-page indictment prepared by the prosecutor mainly lists telephone contacts between the accused and with sources of chemical supplies. The indictment says the accused were trying to procure fuses, chrome piping to build mortar tubes and certain chemicals. The chemicals they were looking for were thionyl chloride [SOC12], potassium fluoride [KF], methanol [CH3OH], isopropanol [C3H8O], isopropanolamine [C3H9NO], white phosphorus [P4], medical glucose and buoxite. The prosecutor charges that when these elements are combined, sarin gas can be produced and that was the aim of the accused.

A perusal of telephone contacts showed that the accused were trying to obtain chemicals by contacting official organizations such as state-owned Mechanical and Chemical Industry [MKE] and Adana Cukurova University, in addition to many other organizations and people.

In his indictment, the prosecutor narrated not only their efforts to produce chemical weapons, but also how al-Qaeda militants moved to Syria via Turkey. The prosecutor says: "Many organization members, both from our country or who transit through our country, join the al-Qaeda terror organization in Syria as instructed by the leader of the organization. They were also active in propaganda activities to recruit more members and were collecting cash donations to procure food, weapons and ammunition for their members in Syria.”

According to a report in the daily Taraf newspaper on Sept. 26, this indictment, which has the potential of backing claims that the chemical attack in Syria was carried out by the opposition, has disturbed the AKP government.

The first trial session will be in Adana on Oct. 30. Only Qassab is in detention.

Of course, the indictment by the Adana prosecutor does not prove that the Aug. 21 chemical attack was carried out by al-Qaeda, but it does show that al-Qaeda-affiliated forces in Syria are making serious efforts to produce sarin gas.

The indictment and the evidence presented therein certainly offer new insights to human rights organizations and International Criminal Court, which are trying to keep track of crimes against humanity and war crimes committed by both sides in Syria. This interesting case that will come to court on Oct. 30 deserves to be followed carefully.