The Iraqi government exercises its power to allow and reject popular demonstrations at will. 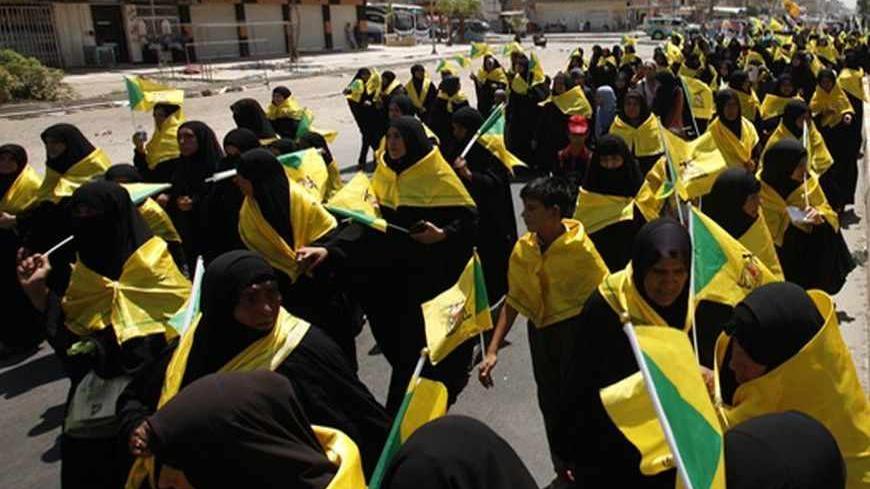 What happened on Aug. 2 in Iraq was not just a paradox. On that day, forces in the government sponsored an event in Firdous Square in central Baghdad, in which pictures of Iranian leaders were raised including Ayatollah Ruhollah Khomeini and current Supreme Leader Ayatollah Ali Khamenei. Another demonstration — demanding that the government provides services, security and a civil state — was organized by a group of young Facebook activists and held in Liberation Square. But government forces attacked the second demonstration and arrested a number of participants.

Although the distance between the two squares where the demonstrations were held is no more than 1 kilometer [0.6 miles], eyewitnesses told Al-Monitor that they saw private cars transporting demonstrators to Firdous Square — while preventing the other demonstrators from reaching Liberation Square, whose access roads were cut.

The first demonstration was for the occasion of Quds Day. It was organized by two Iraqi factions with close links to Iran and, currently, with close ties to the Dawa Party, which is part of the government.

The first faction is the Badr Organization, which is the military wing of the Supreme Islamic Council. The Badr Organization is led by Iraqi Transportation Minister Hadi al-Ameri, who split from the council in March 2012. Badr then joined the State of Law coalition — headed by Prime Minister Nouri al-Maliki, who leads the Islamic Dawa Party — to contest the April 20 provincial elections as a single block.

The second faction is a militia led by former Sadrist Qais al-Khazali and named Asaib Ahl al-Haq. After the United States withdrew from Iraq at the end of 2011, Asaib Ahl al-Haq renounced military activity and changed its name to Jama’at Ahl al-Haq.

But in June 2012, Jama’at Ahl al-Haq organized a military parade in Baghdad. It was attended by leading Dawa figure Kamal al-Saidi, who gave a speech during the event.

The Quds Day demonstration was originally conceived in 1979 by the leader of Iran’s Islamic Revolution Khomeini. Iran has been sponsoring that annual event ever since.

The second demonstration, named “Iraq Rises Up,” was called for by Facebook youths under an anti-sectarianism banner to demand services and security from the state. This demonstration was forcibly dispersed by hundreds of Special Units personnel. Seven demonstrators were arrested and released two days later. They are to be tried for “demonstrating without legal approval.”

The issue of these young people trying to get approval for their demonstration seems like a paradox. In a statement posted on the group’s Facebook page on the evening of Aug. 4, the group said that they went to the local government in Baghdad to get a permit for the demonstration and were told to “go to the Council of Ministers.” So, they went to the Council of Ministers, which told them that demonstration permits were under the jurisdiction of the Interior Ministry. They then went to the Interior Ministry, which told them that they would get the permit from the Baghdad Operations Command on the day of the demonstration.”

That long scenario about granting a demonstration permit illustrates one of the most important aspects of the imbalance in the Iraqi legal system. Article 38 of the constitution provides that the state shall guarantee “freedom of assembly and peaceful demonstration, and this shall be regulated by law.”

The phrase “regulated by law,” which is everywhere in the Iraqi constitution, may be one of the most prominent aspects of the Iraqi political crisis. The Iraqi parliament never sought to pass a law that translates the essence of the phrase “the state shall guarantee ... freedom of assembly and peaceful demonstration.” But rather, the Iraqi administrative and security bodies are relying on laws that go back to the era of the former Iraqi regime.

The legal ambiguity about how a permit to demonstrate is granted, refused, delayed or blocked — as happened with the Facebook youths — is a serious deficiency in the essence of the freedom system in Iraq.

Perhaps, it is worth recalling that dozens of demonstrations that happened in various Iraqi cities did not get official approval and were not suppressed by the security forces. Demonstrations for civil liberties usually take place in Liberation Square, which is separated from the seat of government in the Green Zone by a bridge over the Tigris River. The security forces refuse to issue “demonstration permits” at that location to justify suppressing demonstrations.

Demonstrating is a basic civil right. A democratic state cannot deprive its citizens of that right. The state’s duty is not to approve or refuse the holding of a demonstration. Rather, the “demonstration permit” is intended to make the security forces protect the demonstration after they have been notified of its location and path and prepare for any emergencies that may occur.

The Iraqi leadership misinterprets those rights and interprets the constitution as giving the government the power to approve one demonstration and reject another. This reveals that the repressive state in Iraq has deep roots and still imposes its presence, laws and behavior on the security and political institutions, even 10 years after they have gone.