After the ouster of Egyptian President Mohammed Morsi and the Muslim Brotherhood from power, Hamas is again looking to Iran for support. 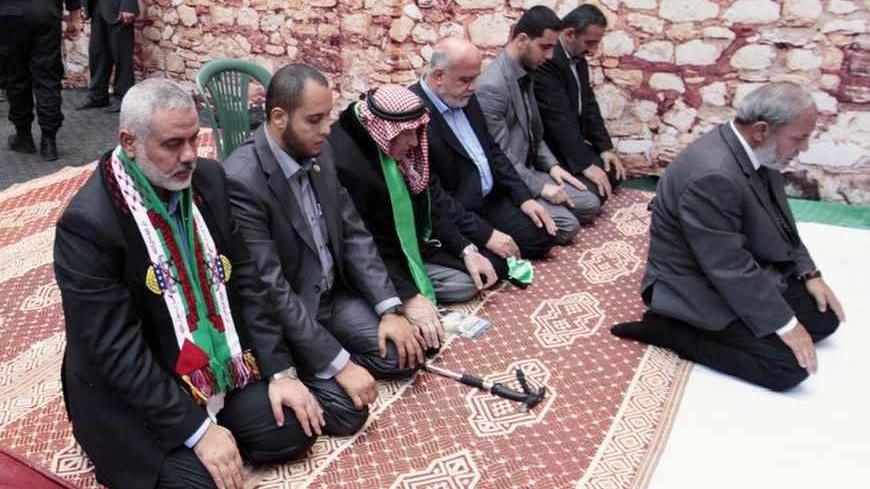 Senior Hamas leaders Ismail Haniyeh (L) and Mahmoud al-Zahar (R) pray at the stage during a rally marking the 25th anniversary of the founding of Hamas, in Gaza City, Dec. 8, 2012. - REUTERS/Ahmed Jadallah

One month ago, I asked an Iranian diplomat in Beirut about relations with Hamas and whether there is any chance things will return to normal. “The door was never closed,” he told me. “Their bureau in Tehran is still functioning, and we still have contacts with them, it’s them who decided to downgrade relations, not us.”

For years, Hamas was Iran’s main ally in Palestine. Money and weapons were not the only things Iran gave to its ally. Also included was safe haven in Damascus, a secured branch in Lebanon and being on the favorite list after Hezbollah for “strategic arm” supplies.

According to a Palestinian source in Gaza whom I spoke to via phone, “There are only a few Hamas officials who don’t know Tehran, but the old days are over. Hamas won’t again be Iran’s favorite here. There is no more mutual confidence.” The source, who is anti-Hamas, elaborated: “The Muslim Brotherhood is Hamas’ biological mother, while Iran is the one who cared and pampered. Hamas chose its biological mother when Iran needed them. They were able to reach a compromise, but they decided to burn the boats.”

In Tehran, not all Hamas’ boats seem to be burned, thanks to few officials in Gaza who decided on their own that relations with Iran shouldn’t halt. One of those was slain commander Ahmad Jabari, who maintained strong ties with Iranian officials and had his own lobby within the political bureau. Mahmoud al-Zahar, one of the founding fathers of Hamas, both influenced and was influenced by Jabari. Zahar, a hardliner in politics and religion, was one of few officials in the movement who continued to praise Iran and its role and maintained strong relations with Tehran. (Al-Monitor published on July 15 a piece on Zahar’s Iranian relations.)

In November 2012, after the eight-day war, I visited Gaza. Back then, Zahar responded to Khaled Meshaal ignoring Iran’s role by putting on his military uniform and conducting a news conference to thank Tehran. A few days later, posters were raised in Gaza thanking the Islamic republic in Arabic, English, Farsi and Hebrew. Pro-Meshaal members tried to tear down the posters, but members of the military wing, Izz ad-Din al-Qassam Brigades, intervened and the posters stayed.

Back in Tehran, on the day of Hassan Rouhani’s inauguration, the president welcomed the old resistance triad, Hezbollah, Hamas and Islamic Jihad. "The president wanted to send a clear message to Hamas that they are welcome,” said a source here in Tehran. “There were contacts during the past months to revive the relations, but after the fall of the Muslim Brotherhood in Egypt things became serious and Hamas showed much interest in healing the wounds, so meetings became very fruitful, and they were mainly in Beirut.”

Our source, who speaks Arabic very well and has good relations with Palestinian factions, explained that Tehran had no conditions. “We told Hamas a long time ago we don’t mind them having different views on any issue, except for Israel, still they have to be rational in their views, and as we understood many in their leadership are reviewing their position on the war in Syria.”

On Aug. 8, Al-Monitor’s Adnan Abu Amer wrote that Hamas might be considering a move to Beirut. Sources in Tehran are also saying the same, given the situation in Egypt, the security threat in Turkey and Qatar’s "indirect and polite request that Hamas should leave Doha within a year from now." Our sources confirmed that Mousa Abu Marzouk is the man leading the talks, since he was one of the last officials to visit Iran months ago and he’s directing the new move along with other prominent figures, including Emad al-Alami, a former detainee who’s described by some Hamas members as the “leader.”

I asked my source if Meshaal will visit Tehran any time soon. “Gates were never closed,” he said. “[Meshaal] should have a clear agenda to discuss with the Iranian officials. Mr. Meshaal knows Tehran very well and knows the Iranians, too. They are on one path, a direct line from Tehran to Al-Aqsa Mosque, and whoever wants to join, they don’t mind.”

Ali Hashem is an Arab journalist who is serving as Al-Mayadeen news network's chief correspondent. Until March 2012, Ali was Al-Jazeera's war correspondent, and prior to Al-Jazeera he was a senior journalist at the BBC. Ali wrote for several Arab newspapers, including the Lebanese daily As-Safir, Egyptian dailies Al-Masry Al-Youm and Al-Dostor, the Jordanian daily Al-Ghad, and also contributed to The Guardian.