The US objective should be to convene the Geneva Conference on Syria as soon as possible, not to provide an open-ended commitment to the Syrian rebels. 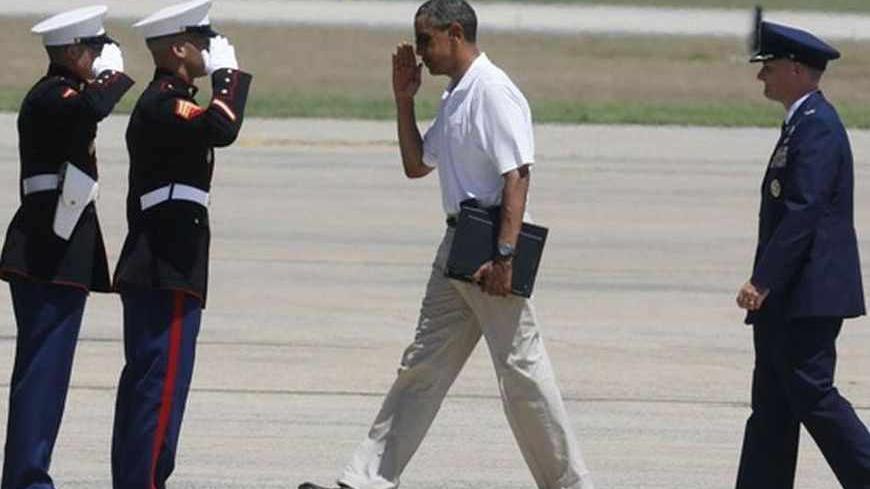 US President Barack Obama salutes before boarding Marine One at Andrews Air Force Base outside Washington, July 5, 2013. - REUTERS/Larry Downing

The Washington Post reported this week that the House and Senate Permanent Select Committees on Intelligence have slowed the Obama administration’s efforts to provide arms to Syrian rebel forces.

The committees’ unease with the administration’s proposal includes whether US arms will fall into the hands of jihadist forces, whether the arms being discussed are too little, too late and whether what is being proposed is a slippery slope to deeper US involvement in Syria.

While Senator Carl Levin, chairman of the Armed Services Committee, called this week for the United States to consider a no fly zone and limited airstrikes against Syria, as reported by Barbara Slavin, there is limited appetite in Congress, especially in the House of Representatives, for deeper involvement.

In interviews with Al-Monitor, both Christopher Van Hollen, ranking Democrat on the House Budget Committee, and Pete King, Republican chairman of the House Homeland Security Sub-Committee on Counterterrorism and Intelligence, were wary about arming Syria’s rebels.

Underpinning congressional unease is how unpopular the policy seems to be with Americans. A recent Gallup poll reported that 54% disapprove of providing military aid to the rebels, while a Pew poll revealed 70% oppose such aid.

The administration’s difficulty in getting congressional and popular support for its Syria policy might in part be that the decision to aid the rebels has been portrayed as the outcome of an internal administration policy struggle, rather than a well-considered strategy with a clear objective.

This column has argued that the Obama administration’s decision to aid the rebels — in the service of a diplomatic surge to convene the Geneva conference on Syria — is indeed the right course.

A vague or open-ended commitment to rebel forces, on the other hand, could put the United States on the slippery slope to mission creep in Syria and prolong the war, leading to more death and tragedy for Syria and the region.

Every day the war continues, Syria’s neighbors — especially Jordan, Lebanon and Iraq, all US allies — are further destabilized by the spread of the conflict and the flow of refugees. Ali Hashem reported this week on the bombing in Beirut, which injured 53, and which is only the most recent sign of the Syrian spillover to Lebanon. Iraq is beset by terrorism from groups directly or loosely linked to Syria, and Jordan’s situation is dire. Regular readers of the Israel and Turkey Pulses will be familiar with the costs and concerns about the Syrian war in those capitals.

Syria itself is becoming a failed and divided state. So-called liberated areas are now the scene of collapsed governance and fighting among the Free Syrian Army (FSA), Islamist factions and terrorist groups. Kamal Hamami, a member of the FSA's military leadership, was killed this week by an al-Qaeda linked group in Syria. Even with the supply of arms from the United States and its allies, the bitter reality is that the FSA — with its divided and factionalized political and military leadership — is likely to be no match for the anti-Assad Salafist groups, let alone the Syrian military, backed by Iran and Hezbollah.

Although US Secretary of State John Kerry is working intensively with Russian Foreign Minister Sergey Lavrov and others to convene the Geneva conference, there remains a question in congressional and popular understanding of the ultimate objective of US military aid to the Syrian rebels, and how it is linked to a political solution.

Clarity on Syria policy might at some point require US President Barack Obama himself to make the case that aid to the rebels is an instrument of US leadership toward an urgent political solution in Syria, putting to rest concerns about an open-ended intervention.

This means firstly — and urgently — a cease-fire in Syria, followed by talks toward a political transition by the Syrian parties, including the opposition and the Syrian government, as outlined in the Final Communique of the Action Group for Syria — also known as the Geneva Agreement.

The United States can also make clear that it does not share the view of some of its Arab Gulf allies that Syria is a battleground for a proxy war with Iran, and that those providing or facilitating arms to terrorist groups will be held accountable.

And this brings us to Iran. This column has argued that Iran — which has made a formal offer to the P5+1, the United States, United Kingdom, France, Germany, Russia and China, to discuss Syria — is key to a cease-fire and political transition there.

Laura Rozen reported this week that the Obama administration is hopeful that the election of Hassan Rouhani as president will present an opportunity for progress in the nuclear talks.

The hope here is that this prospective opportunity will be more than just the United States awaiting a new Iranian response to a dressed up version of the last P5+1 proposal to Iran, but also include an opening on Syria.

Seyed Hossin Mousavian wrote this week that the rise of Iranian moderates will create opportunities for cooperation and constructive engagement on Iran, and Abbas Maleki describes a shift toward regionalism in Iran’s foreign policy.

If a trend toward moderation is indeed in the cards under Rouhani, it is time to put Iran to the test and finally take up its offer to talk about ending the Syria war, which should be a strategic and humanitarian priority for the United States, Iran and the international community.