What can we learn from Homs?

Given the collapse of the Geneva process, and the Syrian government’s staying power, localized cease-fires may be the latest trend in the conflict. 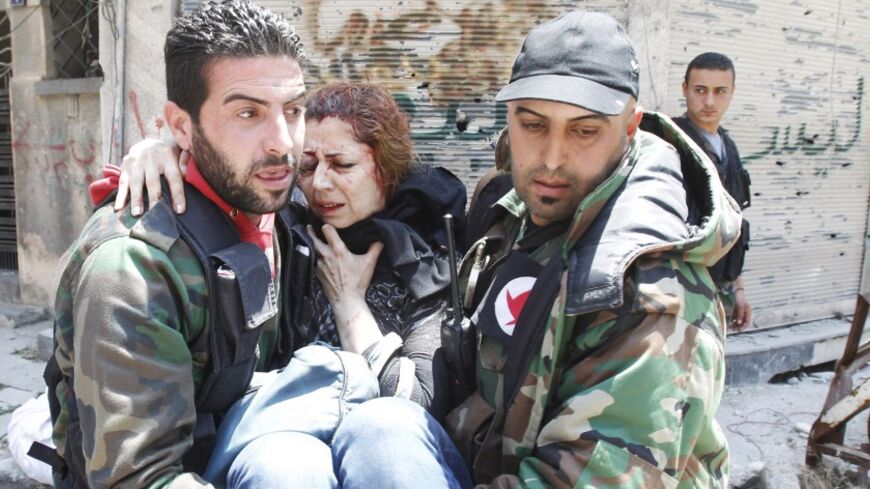 People carry a wounded woman after an accidental explosion caused by leftover ordnance at Bustan al-Diwan, in old Homs City, May 10, 2014. Hundreds of residents returned to Homs after rebels left the city. - REUTERS/Khaled al-Hariri

Sen. John McCain, R-Ariz., told Julian Pecquet this week that the negotiated exit by rebel forces from the Old City of Homs, which had been under siege by Syrian government forces, was a "huge victory" for Syrian President Bashar al-Assad.

That is one way to see it. Other ways might be as a victory for the people of Homs, who finally got some relief from a brutal siege, and as a possible model of the incremental, painstaking and localized diplomacy required to bring relief to Syrians in war zones, especially given the collapse of the Geneva process.

In Syria, we are dealing with a conflict where 150,000 are estimated to have been killed, 2.8 million are refugees, 6.5 million are displaced, 3.5 million live in areas where aid is blocked or hindered and 240,000 live under siege.

So if we are keeping score on the humanitarian front, some of those numbers went down a tiny bit in Homs, thanks to intensive diplomacy involving UN and Syrian officials, opposition leaders and Russian and Iranian diplomats.

The negotiations over Homs also led to the allowance of supplies to the Shiite towns of Nubl and Zahraa, which have been blockaded by rebel forces.

John Ging, director of operations for the United Nations Office for the Coordination of Humanitarian Affairs (OCHA), who has consistently rallied the international community to do more to address the crisis in Syria, said on May 9, "The agreements that you're seeing between the government and the opposition are evidence of what can be done."

Francesco Borri, reporting from Aleppo this week, writes that weary rebels fully committed to the overthrow of Assad nonetheless see Homs as a possible model for a way out of the war.

Borri describes an eerie and unsettling normalcy to life in war-torn Aleppo: “This is Aleppo today. The war is so normal here, so familiar that garbage bins mark the front line of fighting on one side of a street, while on the other they’re used as goalposts for an improvised soccer match. Snipers have shifts. You can see them reaching their nest in the morning, coffee in hand, and parking in front of the main door as if they were going to work. In Aleppo, nothing is as safe as the front line as the war changes course. Civilian casualties are no longer collateral damage, they are the target.”

Edward Dark wrote in February of his hope that a trend toward localized cease-fires would not be jeopardized by an intensification of armed support for opposition groups.

Meanwhile, Syrian Opposition Coalition President Ahmed Jarba is in Washington for meetings with senior US officials, including US Secretary of State John Kerry, and members of Congress, including Senate Foreign Relations Committee Chairman and ranking member Robert Menendez, D-N.J., and Bob Corker, R-Tenn., as reported by Julian Pecquet.

Jarba is seeking more lethal US military assistance, especially anti-aircraft weapons, which the coalition believes can escalate the military pressure on the Syrian government to such a degree that it would force Russia and Iran to give up on their support for Assad, and be catalyst for more Syrian military officers to defect.

In an exclusive interview with Al-Monitor, Rime Allaf, a senior adviser to Jarba, said, “We think that the FSA [Free Syrian Army] getting the means to defend the population against those barrel bombs is also a message to the Russians that this is now unacceptable.”

She dismissed the notion that more arms will only lead to more fighting.

“The recipe for 10 more years of war is not doing anything. It’s allowing Assad to think that he can continue getting away with it,” she told Al-Monitor.

The Senate Armed Services Committee has asked the coalition to provide it with a wish list of US assistance, as Julian Pecquet broke the story on May 9.

The prospect of Russia or Iran backing down on Assad seems less likely today, especially as government forces appear to gain and elections scheduled for June 3 are going ahead.

Ryan Crocker, former US ambassador to Syria, Iraq and Lebanon, warned last week at the Council on Foreign Relations, “We would be making a grave mistake if our policy were aimed at flipping the tables and bringing a Sunni ascendancy in Damascus,” as reported by Barbara Slavin.

Crocker counsels against regime change and a possible slippery slope in US military support, and instead advises a policy to strengthen Syria’s neighbors against the spread of war, provide more refugee and humanitarian assistance, and, over time, seek to influence the ruling Alawite power structure in Syria, in part by international war crimes charges against Assad.

Crocker’s wise counsel complements policies advocated in this column, such as strengthening regional counterterrorism cooperation, increased humanitarian assistance and accountability for crimes by all parties in the conflict. His approach to the Alawite leadership also tracks with this from the first Week in Review column on Nov. 28, 2012:

“President Assad is the leader of the Alawites, until the armed Alawites decide otherwise. Simply put, until the Syrian Alawites themselves make a change, they will back Assad. Any initiative that therefore leaves out these same Alawites of Syria, and overlooks the sectarian, local and regional dimensions of the Syrian conflict, is a recipe for diplomatic failure and more deaths among all Syrians. … Until such a time there is a change from within Syria’s Alawite community, the conclusion one must reach, is that for now Assad is their leader, for whatever reason.”

The Barack Obama administration’s hesitance to get more deeply engaged in Syria probably reflects the popular mood. Despite the calls for a more assertive Syria policy by some prominent members of Congress, most Americans prefer the United States to be less active in world affairs and conflicts, according to several recent polls.

And while comparisons are often risky, it is worth recalling the recent experiences of Iraq and Libya, where even direct US military intervention, including in the former case a decade-long occupation, could not assure a stable let alone democratic transition, in either country.

Editor's note: A previous version of this article contained a typo when referring to the US invasion of Iraq. The mistake has been corrected.