Another Israeli Summer Of Occupation, Apathy

US Secretary of State John Kerry's failure to restart negotiations is no surprise, in view of Israeli and Palestinian apathy and lack of public outcry. 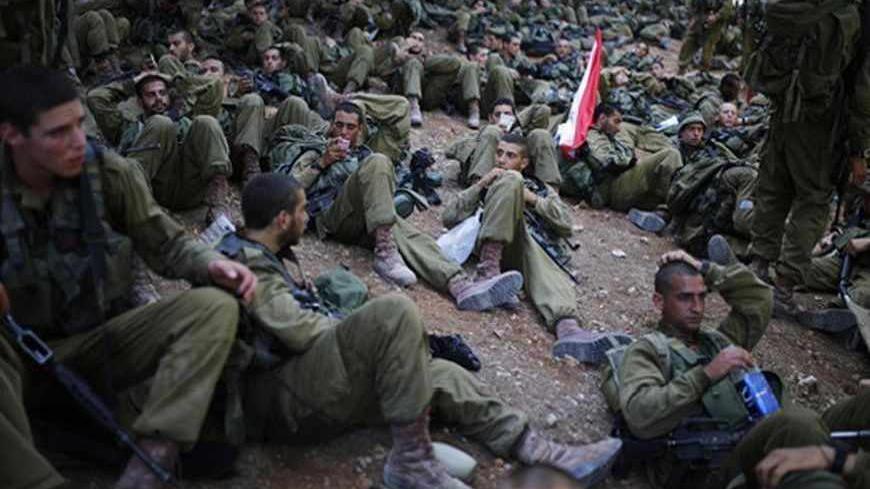 Israeli soldiers of the paratrooper brigade rest as they take a break during a march near Jerusalem, marking the completion of their advanced training, at the end of which they receive their red paratrooper beret, June 27, 2013. - REUTERS/Amir Cohen

Two main headlines ran in the news on June 30. One read, “Tensions Peak in Egypt as Mass Protest Nears,” while the other reported, “Despite Pressure by Kerry, No Headway on Renewing Negotiations.” Several hours later, the second headline was replaced online by a more categorical one: “Kerry Failed: Left Israel Without Summit Declaration.” The first headline remained unchanged.

These headlines reminded me of an article I once published in Israeli daily Haaretz, inspired by the revolt against former Egyptian President Hosni Mubarak (January 2011), which was spreading by means of the social media in Egypt. I asked, “Doesn’t the West Bank have Facebook?” I surmised that the reports on Al-Jazeera from the scene of rioting in Egypt would trigger thoughts of rebellion among unemployed Palestinians in the West Bank, whose numbers then constituted 16.5% of the workforce — as opposed to 9.7% in Egypt. I believed the day was near when thousands of Palestinian laborers, lining up in the early hours of the morning in cage-like facilities to cross into Israel and be granted a day’s work at Jewish construction sites, would take to the streets en masse. I predicted that they would bring about the ouster of “President” Mahmoud Abbas (Abu Mazen) and the dismantling of the Palestinian Authority (PA). I estimated that Palestinian students, like their friends in Tahrir Square, would not leave Al-Manara Square in Ramallah until they received the basic right reserved for every human being in a democratic society — the right to freedom.

Two and a half years have passed since then; unemployment in the West Bank has only risen, workers continue to line up at dawn at the border crossings, students prepare for their year-end exams and US Secretary of State John Kerry went home empty-handed. Millions are demonstrating in Egypt against the Muslim Brotherhood, and in Gaza women cover their faces under orders of the Hamas “modesty patrols.” Palestinian Prime Minister Rami Hamdallah announces his resignation — the second one to do so within two months. At the Quartet offices in Jerusalem, former British Prime Minister Tony Blair’s people are putting the final touches on a plan to funnel $4 billion to the Palestinian economy — this is the same ambitious plan that Kerry announced in his speech at the World Economic Forum conference held at Jordan’s Dead Sea at the end of May. No doubt, means will be found to pay the salaries of the 160,000 PA employees, especially the policemen, so they can shop for Ramadan [month of fasting due to start on July 9].

Thus, another summer of occupation will pass in peace. Actually, without peace. And anyway, who has the strength to demonstrate in the July-August heat? It’s much more pleasant in the air-conditioned plants of the settlements’ industrial zones. It’s a pity, really, that the Europeans have decided to label settlement products. This actually hurts the livelihood of the Palestinian workers — Deputy Foreign Minister Zeev Elkin recently expressed his “concern” about this on this site. And who knows? They say that Kerry will be back soon for another round of negotiations about negotiations, and that this time he really will put Bibi [Prime Minister Benjamin Netanyahu] and Abu Mazen into a tent between Jerusalem and Ramallah, until white smoke comes out. Wait, doesn’t this sound familiar? Isn’t this what we were told when former secretaries of state George Shultz, James Baker, Warren Christopher, Madeleine Albright, Colin Powell, Condoleezza Rice and Hillary Clinton were wandering around here? Time flies when you’re having fun …

In fact, what do I want from these miserable Palestinians who can hardly make it through the week? What are my Israeli friends — those whose average income is 10 times higher than that of the neighbors across the way — willing to do to end the occupation? How many of those who recognize the fact that one can't “be a free people in our land” — to quote the words of the Israeli national anthem — and prevent another people from being free in their land, take part in anti-occupation protests? How many of those who complain that their money is being directed toward the settlements participated on June 23 in the round tables project convened by more than 20 peace organizations in 11 localities? The central gathering in Tel Aviv, in which I took part, was attended by less than 1,000 people. In Haifa, there were only 30 to 40 people and in Jerusalem, the capital, some 80 men and women. I thought with regret of the hundreds of hours put in by Shaul Arieli of the Council for Peace and Security to organize the event and recalled with envy the half million Israelis who marched in Tel Aviv two years ago to protest the price of housing and cottage cheese. In the last elections, they gave their votes to Finance Minister Yair Lapid, his “brother'' Economy and Trade Minister Naftali Bennett and a bit to Labor Party leader Shelly Yachimovich. The Meretz Party headed by Zehava Gal-On was too left-wing for them. It’s a fact, Meretz supports the Arab Peace Initiative, the very initiative that “even” our Defense Minister Moshe Ya’alon described as no more than a “spin.”

The Israeli public prefers the “opium for the masses” fed to them by the prime minister’s office through several “dealers” in the media — referenced as, “there’s no partner” — to feeling uncomfortable with the injustice of the occupation. A maddening 1% hike in the value added tax and a miserable 1% cut in the Knesset members' pay bother the Israeli Jews more than the number of Palestinians living under occupation and the number of minors among them sitting in Israeli jails. A veteran journalist I met at a Tel Aviv square said, somewhat in earnest and somewhat in irony, that only a European embargo on the broadcast of the Champions League in Israel in reaction to the settlement policy and the diplomatic freeze would bring the public out into the streets in large numbers. On the other hand, a Gaza singer mesmerized millions of Palestinians on their television screens and became an overnight sensation far greater than Kerry and his boring travels in the region. It would be interesting to know what goes through their minds at seeing the millions of demonstrators massing in Egypt for this week’s protests.

It would be interesting to know, too, what went through the minds of Israelis and Palestinians at the sight of the hundreds of thousands who flooded Istanbul’s Taksim Square in protest against Turkish Prime Minister Recep Tayyip Erdogan.

At least two-thirds of Israelis and Palestinians — according to opinion polls — support the solution of two states living peacefully side by side. So how can they sit pleasantly at home when their house is on fire? How can they keep sitting there, facing the risk of Kerry slamming the door behind him, after another one or two unsuccessful rounds of talks, leaving them on their own?

Or perhaps, there’s nothing going through their minds? It seems that at least in Israel, “the only democracy in the Middle East,” people prefer to stay in their air-conditioned homes and not think about it. After all, the July-August heat just started.