Shimon Shamir, former Israeli ambassador to Jordan, tells Akiva Eldar why raising the possibility of Jordan annexing the West Bank is a slap in the face to Amman and runs counter to Israel's interests. 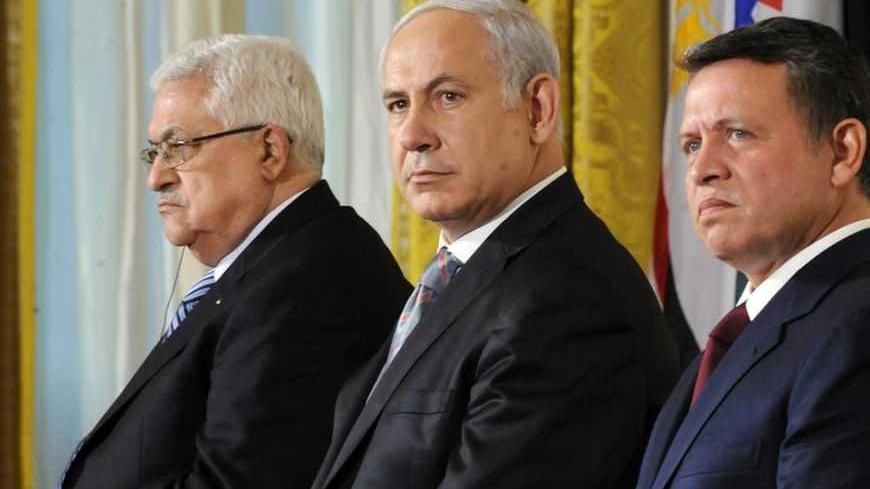 Fifteen minutes. That’s how long it should take President Barak Obama and his entourage to drive from Jerusalem to Ramallah. That’s all it takes without any checkpoints or traffic along the way. No more than that.

On the other hand, the president will need light years to overcome the differences surrounding the permanent settlement that exists between the leaders sitting in these two cities. And this does not take into account the endless hours he will have to spend surrounded by American Jewish lobbyists and members of Congress hoping to foil any diplomatic effort that would require Israel to withdraw from the West Bank.

As for the Palestinians, they utterly reject the infrequent signals from Israel that it is willing to change the entire framework of the talks. In other words, instead of discussing a permanent settlement based on 1967 borders, which would include the partition of Jerusalem and a solution to the refugee problem, Israel would be willing to discuss an interim agreement, based on the recognition of a Palestinian state within temporary borders (an option included in Stage B of the Road Map for Peace, proposed by George W. Bush in 2002 and rejected by the Palestinians on several occasions).

Both these paths lead to a dead end, which in turn leads to a desperate search for some kind of “out of the box” solution. One of these solutions takes us way back in time to what was once known as the Jordanian option — that is, in one way or another the Kingdom of Jordan would go back to ruling over the Palestinian population in the territories. In an article published recently in Al-Monitor, Adnan Abu Amer wrote that the option of a confederation between Jordan and Palestine, with the possibility of Israel also being a partner, was discussed at a secret meeting between Jordanian King Abdullah II and Israeli Prime Minister Benjamin Netanyahu in Amman [in December 2012]. Abu Amer reported that Palestinian Authority President Abu Mazen had recently told his advisors that in the absence of an Israeli partner in a peace agreement, they should prepare for a confederation with Jordan.

In a special interview with Al-Monitor, Professor Shimon Shamir, Israel’s first ambassador to Jordan, was asked whether the Jordanian option is still alive and kicking or whether it is just a figment of the imagination, clung to by people seeking an escape route from the “Palestinian exigency” that is, the reality in which a sovereign state is established beside Israel, between the Jordan River and the sea. In his new book, The Rise and Fall of the Warm Peace with Jordan: Israeli Policy in the Days of Hussein (in Hebrew, Kav Adom Publications, 2012), Shamir writes that the option of creating a Palestinian state east of the Jordan River, on the ruins of the Hashemite regime, runs counter to Israel’s basic interests. According to him, even raising this idea as a catchphrase destroys Israel’s relationship with Jordan, exacerbates the Jordanian leadership’s reservations about Israel’s ultimate objectives, and is perceived as a slap in the face after all that Jordan has done to help achieve peace.

Al-Monitor: Then why does the idea — the Jordanian option — keep coming up?

Shimon Shamir: It’s a terrible idea. I have a hard time understanding how serious people can even consider it. They say, "We’ll give Gaza to Egypt and the West Bank to Jordan, and Israel will live in peace." It was impractical back then, and it’s impractical now. Today there is no “Jordanian option” for a sovereign Palestinian state within the 1967 borders. The whole idea behind the confederation proposal depends on there being a sovereign Palestinian state. Only it can decide whether it is even interested in that type of agreement. We can’t forget that the United Nations has already recognized Palestine [as an observer state].” . . . Due to their unwillingness to deal with the Palestinian problem, they are prepared to create an even bigger problem. What they are actually talking about is creating a Palestinian entity that will command an army and an air force and which could open its borders to any enemy it wants. It will be a state ripped in two, where winning back the West Bank is the primary national objective. The very existence of Jordan is an Israeli interest of the highest order. One of Israel’s achievements is that Jordan serves as a buffer state. Any attempt to promote the idea of turning it into a Palestinian state could actually turn it into a hostile nation.

Then how do you explain the fact that the concept of the Jordanian option is once again being discussed?

King Abdullah’s visit to Ramallah [December 6, 2012], and the visit there by Prince Hassan [Abdullah’s uncle], really underscored the fact that the West Bank was conquered from Jordan. It reinvigorated the Jordanian’s interest and fueled the long-standing [Israeli] desire to have them "solve the problem for us." People have a tendency to escape from the crises they face through fantasy. Even without this, Jordan has quite a few complicated problems of its own to contend with, especially since the "Arab Spring" started. The Jordanians don’t need some other force to stir up trouble in the kingdom. King Hussein once told Prime Minister Yitzhak Rabin, "You have a problem: You are surrounded by enemies. I have a more difficult problem: I am surrounded by friends." The reality today is more complex. The situation in Jordan is worrisome. Even in the days of Nasserism [the national and social revolution led by Egyptian President Gamal Abdel Nasser], there was never this much violence in Jordan’s immediate surroundings. The collapse of Syria in the north could result in a wave of refugees and complications with trade. Islamist groups such as al-Qaeda and the Muslim Brotherhood pose yet another threat.

If Jordan really wants to distance itself from any connection to the Palestinians, then why does it insist on being involved in the peace process?

Jordan obviously has interests in the territories, so that even if the negotiations must be between Israel and the Palestinians, the Jordanians should also be taken into consideration. Their interests include trade with the West Bank, Jerusalem, and a long list of other legitimate issues that must be addressed. Advancing the peace process is a first-tier interest for Amman, and to do that takes more than just statements to the press. The steps must be more effective, whether it is through the Quartet or the promotion of the Arab Peace Initiative. That’s why the king meets with [Hamas leader] Khaled Meshaal and hosts Abu Mazen. All of this is intended to advance the peace process, not to get a foothold in the territories. The situation in the West Bank is explosive. A third intifada might well erupt there sooner or later, and if it does, it could spill over into Jordan. Add to this the results of the elections in Israel and the resurrection of the position that Jordan is Palestine. It may have been rejected by Bibi [Prime Minister Netanyahu] and [former prime minister Ariel] Sharon, but it is once again being discussed in the Knesset. A major party like Naftali Bennett’s HaBayit HaYehudi has even said so openly.

How much concern do such statements by Israeli politicians really elicit among the Jordanians?

To say that they are incredibly sensitive to them would be an understatement. Jordan has absorbed waves of refugees from Israel, Iraq, and Syria. Their greatest fear is further instability in the West Bank and that Israel’s response leads to yet another wave of refugees crossing their borders. The Jordanians would be unable to shoulder that. When the Jordanians hear Arieh Eldad [former Knesset member from the HaIhud Haleumi Party], they don’t think of what he has to say as provocative statements by some extremist. They worry that politicians like him are just saying what everyone else thinks. They are afraid that attitudes like his have once again become legitimate in the Israeli discourse. It wasn’t easy to convince the Israeli political system that Hussein really meant what he said when he expressed support for a Palestinian state. Quite a few Israeli politicians were convinced that this ran counter to his own interests, so that the support he expressed for Palestinian statehood was little more than lip service. Many Israelis, especially those aligned with the Likud Party, had a hard time believing that Jordan’s official detachment from the West Bank in 1988 was genuine. The conventional wisdom among them was that Hussein wanted us to do his work for him by suppressing the Palestinians in the occupied territories. Netanyahu once told Marwan Muasher [former Jordanian ambassador to Israel, minister of information, and foreign minister], "You don’t really want a Palestinian state. You just don’t understand your leaders’ policies."

I’ve heard, and not only from the right, that the Jordanians would prefer to see the IDF guarding their border with Israel and not the Palestinians.

While they explicitly oppose the annexation of the Jordan Valley, in talks that I had with them, the possibility of an international force along the river was raised. Nevertheless, I got the impression that they consider Jerusalem to be the most important issue of all. Israel made a commitment to take Jordan’s role in Jerusalem into consideration. The Palestinians opposed that, and there are differences of opinion between the Jordanian waqf [the religious council responsible for sacred land] and the Palestinian waqf, but these can be resolved. It is much easier to tackle these disagreements than to deal with the Israeli position. I find it strange that Israel’s second-largest party [Yesh Atid, led by Yair Lapid] has come out against the partition of Jerusalem.

Does the Arab Spring put Israel’s relationship with Jordan at risk?

There is a hard-core element among the trade unions, the Muslim Brotherhood, and the radical parties, which opposes normalization with Israel. That was the situation from the very beginning, but Israel’s policies only add fuel to the fire. Israel has failed to advance the peace process, and it encourages settlements. Israel promised that the peace process would pay dividends, and that it would bring about projects that would help raise the standard of living in Jordan, that it would bring about economic partnerships, that it would lead to construction of an international airport along the border between Eilat and Aqaba and the creation of a large international [industrial] park. None of this was ever fulfilled. Both the promises and the disappointments that come in their wake have implications.

President Obama will have a chance to learn about these implications, while visiting King Abdullah in Amman. The host will probably use this opportunity to make sure that the Jordanian option will not settle in the guest's mind.