Qadri Abu Wassel, a member of the Israeli Arab Monitoring Committee charged with overseeing Palestinian prisoners, expects the government to release Israeli Arab prisoners, whom he regards as political prisoners. 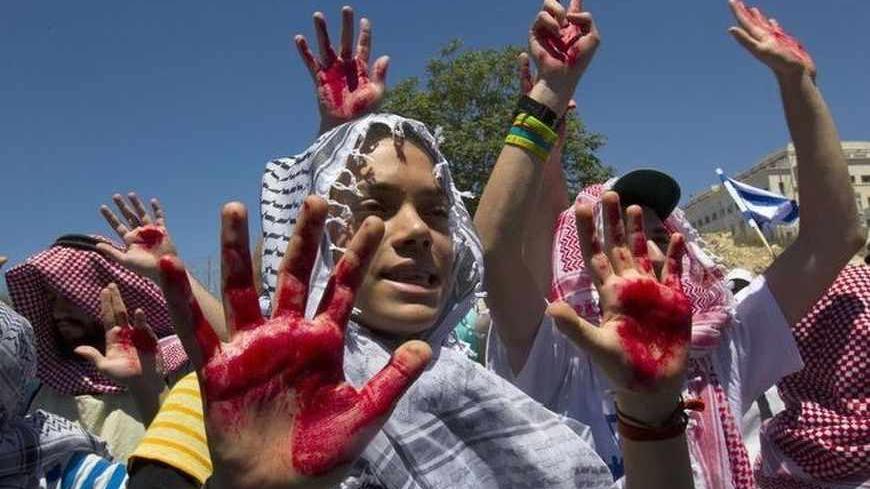 Israelis wearing kaffiyehs hold up hands covered in fake blood during a protest outside the office of Israel's Prime Minister Benjamin Netanyahu in Jerusalem, July 28, 2013. Netanyahu urged divided rightists in his cabinet to approve the release of 104 Arab prisoners in order to restart peace talks with the Palestinians. - REUTERS/Ronen Zvulun

On Sunday, July 28, Prime Minister Benjamin Netanyahu failed to get his cabinet to approve the release of 14 Israeli Arab prisoners held in Israeli jails. His proposal was attacked by ministers and senior security officials alike, including the head of the Shin Bet Yoram Cohen. They argued that Palestinian Chairman Abu Mazen must not be granted patronage over the Israeli Arab population.

As a result of this severe opposition and Netanyahu’s concern that any failure to approve his proposal to release those prisoners would jeopardize the launch of negotiations with the Palestinians in Washington, it was eventually decided to remove the Israeli Arab prisoners from the list submitted to the Palestinian leadership and to decide on their release at some later date, as yet undetermined.

The most prominent of these prisoners is Karim Younis from Wadi Ara. In 1981, Younis and his relatives Maher and Sami Younis were involved in the murder of an Israeli soldier, Avraham Bromberg, who went to high school with Karim Younis in Hadera. The members of this terrorist cell gave Bromberg a ride, stole his gun, shot him in the head and threw him out of their car, leaving him to bleed to death on the side of the road. When he was found, Bromberg was unconscious. He died in the hospital four days later. It took two years before the three perpetrators were finally caught, and they were sentenced to life in prison. Sami Younis, who was not directly involved in the murder, was finally released as part of the Shalit deal, when he was 82 years old.

Over the past few years, Karim Younis has emerged as one of the most prominent leaders of Palestinian prisoners serving time in Israeli prisons. He was sentenced to life imprisonment in 1983. Some five years later, in 1988 (five years before the signing of the Oslo Accords), he wrote a book in his Ashkelon prison cell titled The Ideological Struggle and the Resolution of Differences. In the book, Younis called on the Palestinian leadership in Tunis, and Palestine Liberation Organization (PLO) leader Yasser Arafat in particular, to consider a change of attitude toward Israel. He wrote that Palestinians should recognize Israel’s existence, strive for an agreement on one state for two nations, and accept UN Resolutions 242 and 338.

As is customary with Palestinian prisoners, who elect their own leadership to represent their affairs to the prison administration, the manuscript was submitted to the Fatah prisoners’ “cultural committee” for approval. The committee called Younis to clarify whether he stood behind everything he had written in his book. They wanted to investigate what would cause an Israeli Arab prisoner to “abandon the faith,” so to speak, and they wondered who had incited him to commit such a severe ideological transgression, by parting so abruptly with the PLO’s longstanding credo.

Karim Younis had obtained an education in Israeli prison and even took academic courses through the Open University. Now, he stood before the committee demanding that it approve the distribution of his manuscript so that the prisoners themselves could judge its contents.

“I fought against the Israelis in order to fulfill the goal of the Palestinian people. I killed an Israeli soldier and was sentenced to life in prison. No one has the right to denounce me as a collaborator,” he said. Then he added: ''With all due respect to the committee, it has no right to reject my manuscript.”

After his passionate speech The Ideological Struggle and the Resolution of Differences made the rounds among the prisoners. It became a milestone, even something of a revelation for the other prisoners, both in Nafha Prison, where Younis was moved, and other prisons that had access to the document. Prisoners gathered in their cells to read aloud selections from this revolutionary manuscript. Even if what he wrote deviated from the “tried and true path” and seemed to provide some “seal of approval to the Israeli vermin,” its ideas penetrated into the consciousness of the Palestinian prisoners, who ultimately spearheaded the approach that reconciliation with the Israelis was ultimately necessary.

Younis’ book was the first indication that an ideological shift was underway among Palestinian prisoners, occurring at a time when no one even considered the possibility of holding peace talks with the Israelis.

The next book to be distributed so widely among the prisoners was very much influenced by Younis’ manuscript. Hisham Abdel Razek’s The Sun in the Negev Night continued the argument set out by Karim Younis that it was vital to reach an agreement with the Israelis. Once Abdel Razek was released from Israel’s Gaza Prison after the signing of the Oslo Accords, he became a peace activist.

“You cannot release Palestinian prisoners to the West Bank and Gaza Strip, while leaving our prisoners, those Israeli Arabs who were sentenced before the signing of the Oslo Accords, in prison,” says Qadri Abu Wassel, who is responsible for the issue of prisoners on the Israeli Arab Monitoring Committee, in an interview with Al-Monitor. Abu Wassel is considered “the Father of all the Palestinian Prisoners” in Israel, Gaza and the West Bank. In addition to his aforementioned post, he bears responsibility for those prisoners on behalf of the Sons of the Village movement. He is also secretary general of the Friends of Detainees and Prisoners Association (FDPA) in Nazareth. “If a decision is made not to release them,” he adds, “it could add yet another deep rift in the relationship between Jews and the Israeli Arab sector in Israel.”

Abu Wassel, do you understand the significance of having Abu Mazen become the patron of Israeli Arabs and the precedent that this would set?

“First of all, it is not a precedent. Prisoners have already been released in prior deals. Younis’ uncle Sami was released as part of the Shalit deal at the request of Hamas. Secondly, before the signing of the Oslo Accords, there were some Arab residents of the state of Israel who believed in the principles of the future Palestinian state. They wanted to be liberated, with all that that entails, so they joined the ranks of the Palestinian factions in the territories.

“They did what they did as members of those factions and in their service. They never intended to establish any group consisting of Israeli Arabs, nor did they establish an Israeli Arab faction that supports an armed struggle. They were representatives of the various Palestinian factions in the territories, and today those same factions can be found in Ramallah, speaking and holding negotiations. Our particular issue involved the Palestinian leadership overseas before the signing of the Oslo Accords.”

How many Israeli Arab security prisoners are currently being held in Israeli prisons?

“The total number of prisoners is 92, and we are talking about releasing 14 of them. Of these, five were sentenced to life in prison. But we don’t call them 'security prisoners.' We call them 'political prisoners' to distinguish them from criminals who are prisoners.”

Would you consider a prisoner who committed murder, like the longest-serving prisoner Karim Younis, a political prisoner?

“The way he is being handled is political. Karim acted out of principle on behalf of a goal in which he believed. None of us would agree to launch a terrorist attack, regardless of whether it is against Jews or Arabs. Those are our principles, and we adhere to them. Back then, however, people thought such things would help to liberate the Palestinians so that they would have their own state. That is why they did what they did. Now, the Palestinian Authority and the PLO are heading in the direction of peace. Most of the prisoners we are talking about are already old men. They are in poor health. Take Karim Younis, for example. He has already spent 31 years in prison. These prisoners won’t do anything if they are sent back to their homes. There already are cases of Israeli Arab prisoners who were released and did not go back to terrorism. They have their families, their children to think of. They’ve become upright citizens of the state.”

Doesn’t this send a negative message to Arab Israelis that they can launch a terrorist attack because eventually Abu Mazen or his successor will ensure that he is released?

“There is a new reality out there right now. It isn’t necessary to keep going back to what was said 31 years ago. Today, Israelis are engaged in security coordination with the very Palestinians who sent those Israeli Arab prisoners to launch terrorist attacks against Jews. The people who sent them are out [of prison], so we are now discussing the release of the people that they sent.”