As the hunger strike by Palestinian prisoners in Israeli jails ended, Fatah named the longest-serving prisoner, Karim Younis, to its Central Committee. 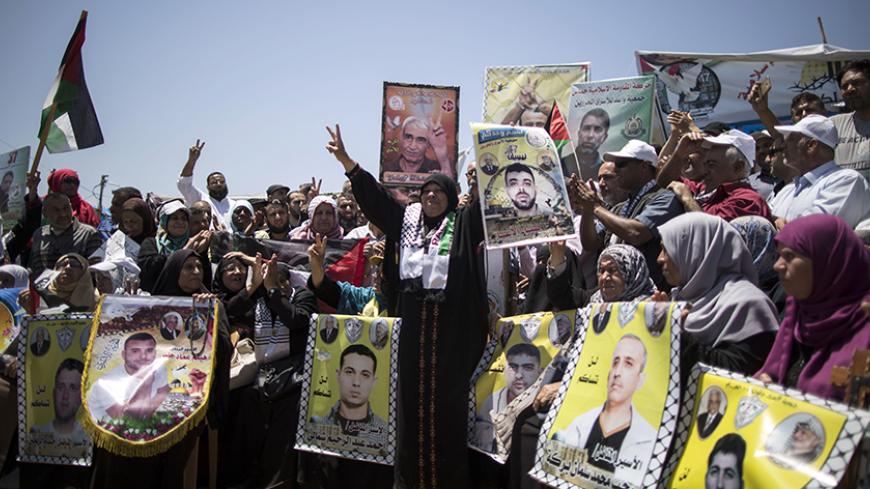 Palestinians take part in rally in support of Palestinian prisoners held in Israeli jails who ended their hunger strike earlier in the day, Gaza City, Gaza, May 27, 2017. - MAHMUD HAMS/AFP/Getty Images

While the 40-day hunger strike by Palestinians in Israeli prisons recently ended, it's no secret that the Palestinians were not satisfied with the level of official support the prisoners received. At one time, Fadwa Barghouti, the wife of Marwan Barghouti, who was leading the hunger strike, protested the lack of support from President Mahmoud Abbas and senior leaders. She held a vigil May 22, along with other wives and mothers of prisoners, at the grave of the late Palestinian National Authority President Yasser Arafat.

A survey by the Ramallah, West Bank-based Awrad polling agency conducted May 21-23 found that more than 60% of Palestinians were not satisfied with the amount of support that the prisoners were receiving from Palestinian leadership. Yet soon after the strike ended May 27, Fatah prisoners sent a glowing letter to Abbas thanking him for his support of the striking prisoners.

This apparent contradiction can be explained by one name: Karim Younis.

One day before the end of the hunger strike, the Fatah Central Committee decided to appoint Younis, the longest serving prisoner in Israeli jails (since January 1983), to the committee.

Who is Younis and why was his appointment to Fatah’s Central Committee a game-changer in the epic protest?

When Israel charged Younis, a Palestinian citizen of Israel, with murder in 1982, he was in college. Younis’ father died while he was in jail and his mother is in her 80s. Local Palestinian media have run a number of profiles on the man they call the dean of Palestinian prisoners and monitored his participation in the hunger strike as an indication of the depth of the support for the strike.

Younis was quoted in the leading Palestinian news agency, Maan, explaining his support for the demands of the hunger strikers for better treatment and more family-visit privileges. “I have been in jail for [nearly] 35 years, and I don't know my relatives at all because they are denied visits for so-called security reasons.” He told Maan that being denied family visits has become “an abusive punishment depriving prisoners of the basic human right of communicating with their family members.”

A holder of Israeli citizenship, Younis was charged with killing an Israeli soldier in the occupied Golan Heights. He was sentenced to death, a sentence rarely used in Israel (with the only exception being Nazi criminal Adolf Eichmann, who was hanged in 1962). The sentence was later reduced to life imprisonment and then to 40 years in jail. While prisoners are normally eligible for parole over time, Israel rarely releases Palestinian war criminals on parole.

Mohammad Darawshe, a political commentator and senior researcher at Givat Haviva, the Center for Shared Society in Israel, told Al-Monitor that Younis' appointment to the most powerful Palestinian body has many potential meanings. “It is a sign of respect to the person and to the prisoners’ movement. But it is also a confirmation that the Palestinian resistance movement extends to Palestinians on the inside [of Israel] and with that it reflects erasing the Green Line that has been a barrier between our two Palestinian communities.”

Darawshe, who worked as a parliamentary assistant to Palestinian members of the Israeli Knesset, said that this act shows “we are one people and not a separate entity.”

He continued, “In the past, there was a feeling that our future is separated — we, as a national minority in Israel, and our people in the West Bank and Gaza striving for an independent state.” Despite his remarks, Darawshe believes that the proper place for Palestinian leaders who are Israeli citizens should be the Palestine National Council (the PLO's legislative body) and not the various executive arms of different PLO factions.

Hassan Abed Rabo, a member of the Fatah Revolutionary Council who hails from the Dheisheh camp near Bethlehem, told Al-Monitor that Younis' appointment reflects the movement's sincere appreciation of the prisoners' action and the unity it demonstrates between the people and the prisoners, reflecting Fatah's holistic ideological approach.

“In its thinking, Fatah still considers our people in the 1948 areas to be an authentic part of the Palestinian struggle and partners in the national struggle,” he said.

Abed Rabo concedes that the appointment of a Palestinian prisoner holding Israeli citizenship has political implications. “There is no doubt that this is a reflection of the fact that the two-state solution has receded a lot because of the reality on the ground and the policies of the Israeli occupation.”

However, not everyone accepts that Younis' appointment has far-reaching political implications, as Darawshe and Abed Rabo claim. Mohammad Horani, a former Fatah spokesman and now a member of the Fatah Revolutionary Council, told Al-Monitor, “[Younis] is the dean of prisoners, who has been in jail longer than any other prisoner, and he was denied three times a chance to be free as part of prisoner exchanges or as part of the political deal between Israel and the PLO.”

Horani argued that the decision to appoint Younis is strictly “a sign of appreciation for his sacrifice and we shouldn’t draw any further conclusions.”

Younis and 20 other Fatah veteran prisoners imprisoned before the Oslo Accord in 1993 were expected to be released in 2014 as part of a deal between the PLO and Israel facilitated by then-US Secretary of State John Kerry. One of the reasons the last batch of prisoners, including Younis, was not released is because of his Israeli citizenship and the Israeli concern that this would further deepen the relationship between the PLO and citizens of Israel.

Younis said in previous interviews that upon his release, he would live in the West Bank or Gaza and work with the government to help build the state of Palestine, for which he and others inside and outside Israel have sacrificed so much. Now his appointment to the Fatah Central Committee certainly ensures he will be able to land a good position in the Ramallah-based administration.