Hamas Gives No Credit to Abu Mazen For Prisoner Release 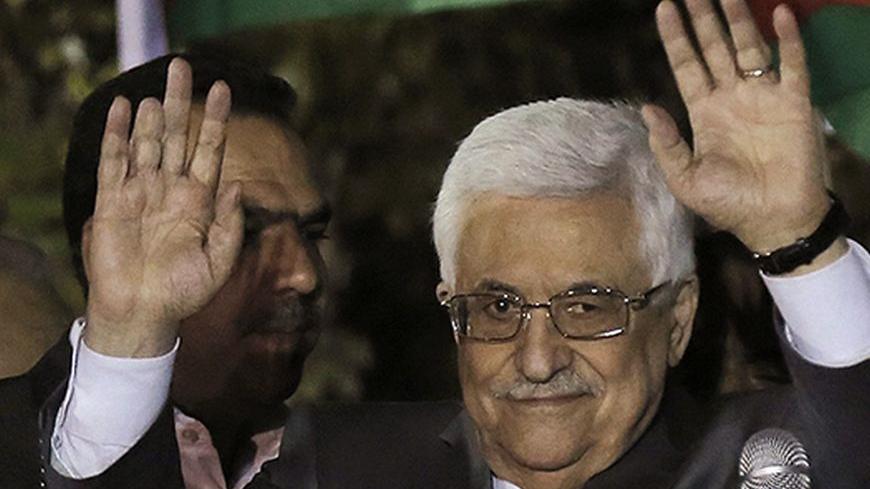 Palestinian President Mahmoud Abbas waves to his supporters upon the arrival of released Palestinian prisoners from Israeli prisons in the West Bank city of Ramallah, Oct. 30, 2013. - REUTERS/Ammar Awad

On Oct. 19, Ismail Haniyeh, the Hamas prime minister of the Gaza Strip, delivered a speech to mark the second anniversary of the release of Palestinian prisoners in exchange for the abducted Israeli soldier Gilad Shalit. Gaza has faced hard times since then, but as far as Hamas is concerned, the release of those prisoners remains a seminal moment, which deserves to be marked every year. And so, despite the steep price that Palestinians paid during the Israeli military onslaught that followed Shalit’s abduction, the release of 1,027 prisoners in the Shalit deal was a significant achievement for the movement.

On Oct. 30, Israel released 26 Palestinian security prisoners. Their release was in fulfillment of agreements reached in advance of the new round of negotiations with the Palestinians, which began this July. Five of those prisoners returned home to Gaza. While Hamas is resolutely opposed to the ongoing talks with Israel, the movement has also advocated stridently on behalf of Palestinian prisoners and made their release a priority. It would therefore be expected that it would welcome the prisoners returning to Gaza, at the very least. This is especially true considering that each of those prisoners had been sentenced to decades in prison for terrorist attacks against Israelis. In other words, their deeds align well with the Hamas worldview.

But the returning prisoners were not welcomed with a festive ceremony. Instead, Hamas chose to ignore their return, and even worse, to hide it. Hamas TV, which broadcasts from Gaza, did not report on the prisoner release, Palestinian journalists were forbidden from going to the Erez crossing point to document the newly released prisoners’ return, and those same prisoners’ families were asked to “celebrate quietly and discreetly.” Once again, Hamas gave a very public sign of the enormous crisis it is facing as a movement. Beyond that, however, it also highlighted the intense enmity that exists between the two major Palestinian movements. What happened was further evidence that instead of taking steps to benefit its constituents, Hamas’s actions are intended to serve the movement’s narrow interests, and they have been so ever since the movement was elected to power.

Ever since it was founded, Hamas was a social welfare movement, whose primary concern was the individual. The movement was established on the “Islamic center” infrastructure created by Hamas founder Sheikh Ahmed Yassin. That “center,” in turn, was comprised of a variety of diverse institutions intended to assist people in the refugee camps and the needy throughout the Gaza Strip. Even after Hamas was formed, those institutions continued to operate. In fact, they gained momentum and became one of the most important branches of the Hamas movement. They are the main reason why Hamas is still thought to be deeply entrenched among the people of Gaza. It is considered the kind of movement whose officials rise from the field, and who, as such, act out of ideology, rather than out of personal or political motives.

Over time, Hamas succeeded in translating that widespread public support into a multiplicity of votes at the ballot box. Ever since then, however, the confrontation with the Palestine Liberation Organization (PLO) has had a jarring impact on the Hamas leadership. The struggle between Hamas and Fatah has long stopped being an ideological dispute. It is now a political feud, with both parties fighting over control of the centers of power. Ideology is no longer the goal, but rather a means to victory in that battle.

That is exactly what happened in the military coup launched by Hamas in June 2007. At the time, the movement’s militants committed the most grievous transgression, as formulated by Hamas founder Sheikh Yassin: Avoid civil war at any cost! They callously shot their Palestinian brethren in the back and in the knees, just so they could seize control of the power centers in the Gaza Strip. The war with Fatah became a daily struggle — ugly, brutal and exhausting. The divide between the two rival movements only grew deeper, so that now it seems like there is no chance at all of Gaza reuniting with the West Bank, and the Palestinians becoming a single, cohesive people again. The vision of two states for two peoples was fulfilled in full with Gaza and the West Bank, with Hamas and Fatah.

Nearly two weeks ago, Haniyeh stood before the TV cameras in Gaza and called for Palestinian reconciliation. Now he's helping to censor the Fatah prisoner release. Haniyeh and other senior Hamas members have long claimed that they will not rest — that they will not sit idly by — until the last Palestinian is released from Israeli prison, but now they are asking the families of those prisoners to show restraint. After all, God forbid that anyone in Gaza should even think that PLO Chairman Abu Mazen actually achieved something to benefit the people of Gaza. The movement that promised “change and reform” for the Palestinian people, and which won the elections as a result, failed to keep any of its promises.

This is the age of the ubiquitous satellite dish. Just about every home has one, including all the hovels in Gaza’s refugee camps. Therefore, much to Hamas’s chagrin, it is impossible for the prisoner release to remain some deep, dark secret, far from the public eye. And it is certainly safe to assume that the Palestinian public is well aware of yet another secret carefully guarded by Hamas. The movement may have promised growth and change, but it only brought chaos in its wake.