With the fall of the Muslim Brotherhood, Hamas has found itself isolated and dependent on Israel for Gaza's daily survival. 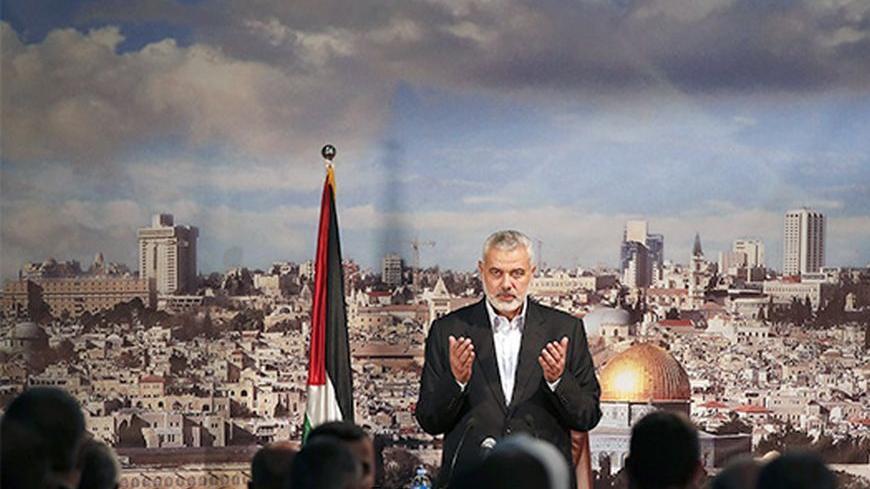 Ever since it was founded, the Hamas movement has been dealing with the need to find a safe transition from its uncompromising ideology and beliefs and the changing reality it faces. This effort has intensified over the past few years, since Hamas became a political movement that rules over the people of the Gaza Strip. Its leaders in Gaza, the West Bank, and other countries are used to treading carefully between the raindrops, seeking out justification for the compromises they must make to survive. Included among these compromises are the cease-fire with Israel and the war that Hamas waged precisely against the groups that sought to continue the campaign of violence against it.

The turbulence that has been sweeping across the Middle East over the past few years shook Hamas to its core. Many experts who study the movement are trying to determine if and how it will extricate itself from the current crisis. How will it restore its lost honor and regain the support of the Palestinian public?

Over the weekend of Oct. 19, Adnan Abu Amer, Al-Monitor’s correspondent in Gaza, listened to what the Palestinian Hamas Prime Minister had to say in a speech that was supposed to be historic, but ended up being banal at best. Abu Amer then went on to describe the crises facing the movement in the Gaza Strip. Calls by the Palestinian Tamarod movement for a revolution in Gaza like the one that occurred in Tahrir Square, and the dissolution of the historic alliance between Hamas, Islamic Jihad, and the Popular Resistance Committees threaten the future of the Hamas movement and its ability to stay in power and govern.

And what is Hamas Prime Minister Ismail Haniyeh’s solution to all that? Terror and violence. “We call for the renewal of the people’s Intifada in the West Bank, … and the renewal of high-quality attacks that will sow terror among the enemy’s leaders,” he read from the page in front of him without so much as batting an eyelash. But today Hamas, the “Islamic Resistance Movement,” which prided itself until recently for leading the jihad against Israel, looks more like a caged lion than anything else.

Given its wretched situation, Hamas is not only incapable of starting an intifada, but it is unwilling to bear the consequences of one. The members of its military wing are fighting the other Palestinian organizations to ensure that they don’t fire rockets against Israel and get the movement involved in yet another round of violence. They are worried that Israeli Prime Minister Benjamin Netanyahu will fulfill his threats and launch a military operation to topple their government in Gaza.

During Operation Pillar of Defense, in November 2012, the Muslim Brotherhood in Egypt got up on its hind legs to rescue Hamas. Then-President Mohammed Morsi sent his prime minister, Hesham Qandil, to Gaza. Immediately upon crossing the Rafah border crossing he announced that the peace between Israel and Egypt would be jeopardized if Israel launched a land operation in the Gaza Strip. The threat worked, and Avigdor Liberman, who was then Israel’s foreign minister, announced that the time was not yet ripe to overthrow Hamas.

Obviously, neither Qandil nor Morsi can save the Palestinian movement. Ever since the Egyptian government started systematically demolishing the smuggling tunnels in the Rafah region, Israel has become the primary provider of food and raw materials to the Gaza Strip. The channel connecting Israel and Hamas is based on common interests, but no less so on a balance of fear. Without that channel, the Haniyeh government could not last a single day.

The border crossings between Gaza and Israel are working at a rate that has not been seen ever since the Hamas coup in Gaza. Between 500 and 1,000 trucks enter Gaza through the Kerem Shalom border crossing every day with goods, raw materials and food. With tongue in cheek, senior Israeli security officials say that Israel has become Hamas’s only ally, and that it is what keeps the movement from crashing. Israel’s interest in keeping the Hamas government in power in its current constitution is reminiscent of the American interest in giving Syrian President Bashar al-Assad another chance in Syria. The concern is that if Hamas falls, it will be replaced by far more extreme groups identified with global jihad.

This default alliance remains intact as long as Haniyeh and the other leaders of the movement follow the rules of the game as agreed upon. As long as there are no attacks and no rockets are fired into Israel, the oxygen line at the Kerem Shalom crossing will continue to operate. Other groups in Gaza — Islamic Jihad, the Resistance Committees, and smaller satellite organizations known collectively as Jalalat — accuse Hamas members of selling their soul to Satan (i.e., Israel) just to stay in power. That is the reason there is tension between the movements and why Hamas has been isolated internally ever since Operation Pillar of Defense.

More than 4,000 Palestinians were killed in the second intifada, and tens of thousands more were injured. Hamas, which was a broken organization on the verge of collapse when the riots began, recovered quickly enough to emerge as the leader of the uprising. That and the endless reservoir of suicide bombers that it managed to recruit at the time transformed it into the largest Palestinian movement.

Anyone who analyzes the new map of the Middle East will be quick to notice that without Iran, without Egypt, without Syria, and without Qatari money, which has stopped flowing into Gaza, the Hamas movement has no chance of repeating its past successes. On the contrary, another armed conflict, a series of attacks, or a hail of rocket fire against Israel will be the end of Haniyeh and his government in Gaza. Senior Israeli officials say so openly, and they reiterate this in closed-door assessments of the situation. There was good reason for Israel Chief of the Southern Command Sami Turgeman to warn on Oct. 13 that if there is another attack, “Gaza will look different.”

So what led Haniyeh to call for an intifada, when he is well aware that it would be of no benefit to him or his government? It must be honor, which is a key concept in understanding how Hamas works, and how the Middle East works in general. Anyone in trouble will roar like a lion to conceal his weakness. Haniyeh hopes for a new intifada to defend the lost honor of a movement that was once so proud but is now pleading for its life.