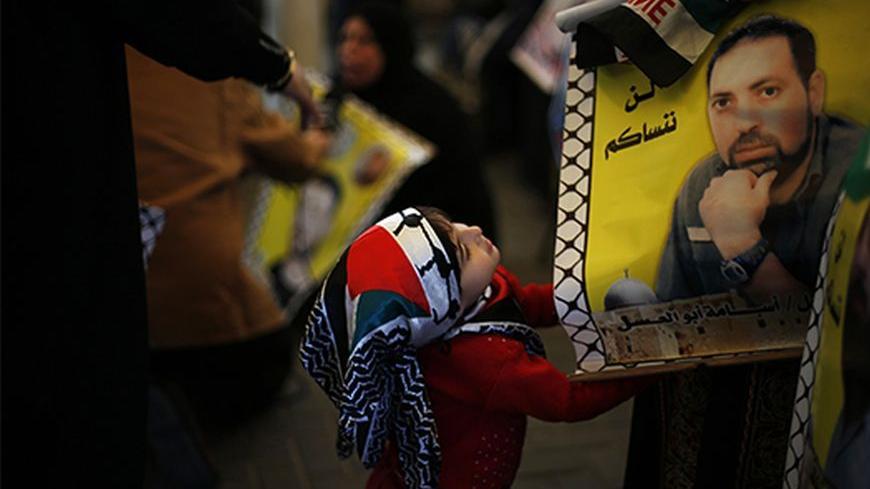 A Palestinian girl looks at a picture of a jailed relative during a protest demanding the release of all Palestinian prisoners held in Israeli jails, in Gaza City, Oct. 28, 2013. - REUTERS/Suhaib Salem

The Palestinian Authority (PA) has kept close tabs on the fiery public debate raging in Israel over the decision to release an additional 26 security prisoners. Political spin from the right and harsh criticism from the bereaved families threatened to thwart the move, which Israel committed to as part of the renewal of negotiations with Palestinian Chairman Abu Mazen (Mahmoud Abbas). However, the decision was confirmed Oct. 27.

All the prisoners who will be released this time were convicted and imprisoned before the signing of the Oslo Accords. Over the last 20 years, the Palestinians have frequently demanded the release the prisoners who were incarcerated before the agreement with Israel in 1993. Prime Minister Benjamin Netanyahu is the first Israeli prime minister who decided to grant this request.

Toward the resumption of the diplomatic process, Netanyahu faced two possible goodwill gestures toward the Palestinians: the release of longtime prisoners or freezing construction in the settlements. After Netanyahu discovered that the right-wing ministers in his government strongly objected to the freeze, he was forced to choose the alternative.

The opposition to the current round of prisoner releases intensified recently as a series of terrorist attacks took place throughout the West Bank. Defense Minister Moshe Ya’alon said that the Israeli Defense Forces are gearing up for a possible escalation of conflict in the PA territories.

However, Palestinian Minister of Prisoners' Affairs Issa Karake rejects any connection between the two issues. He argues that the PA works strenuously to prevent violence against Israelis. In an interview with Al-Monitor, Karake also elucidates the position adopted by the PA and says that Israel’s decision to release prisoners does not give it a green light to continue to build in the territories.

Al-Monitor:  Do you think that the prisoner release will lead to progress in the negotiations? Does it show that the Israeli side is truly interested in advancing the peace process?

Karake:  The Palestinians have hope and trust in the talks, as well as hope and trust that there is a real solution. The prisoner issue is a basic one, and very important in Palestinian public opinion. The removal of this stumbling block and the signal that Israel is carrying through with a step that will bring an end to the suffering of the prisoners and their families strengthens everyone.

Al-Monitor:  Have you been following the coverage of the public controversy in the Israeli media? What is your opinion about the difficulty of many sectors, such as the bereaved families, in facing the decision?

​Karake:  I think that this is mainly the work of extremists in Israel. They incite, not only regarding the release of prisoners, but also regarding the resumption of the diplomatic process between Israel and the Palestinians. All this creates tremendous pressure on the Israeli government. But on the other hand, the release creates trust between the sides. It serves the interests of both parties, and commits us to look forward to the future.

Al-Monitor:  Yet despite this, there is the enormous, real difficulty of Israeli public opinion regarding the release of prisoners who murdered civilians.

​Karake:  I think that talking like this does not benefit anyone. The prisoners who will be released as part of the agreements for resuming negotiations served more than 25 years in prison. There are victims on both sides. Blood has been spilled between both sides. We cannot look back. We must look forward and think that this is the only way to achieve reconciliation.

Al-Monitor:  How many prisoners are there today in Israeli prisons?

​Karake:  There are about 5,200 Palestinians in prison. Eighty-seven of them were imprisoned before the Oslo Agreement: 49 from the West Bank, 18 from Gaza and the rest from East Jerusalem and the 1948 territories [Israeli citizens]. The most longstanding of them all is Karim Younis [who murdered the soldier Avraham Bromberg in 1981]. He has been incarcerated for 31 years already.

Al-Monitor:  Do you believe that he will be released?

​Karake:  We believe that all the Palestinian prisoners must be released in order to carry out the peace process between us.

Al-Monitor:  And now, after the hard decision has been made in Israel, is there optimism on the Palestinian side regarding Netanyahu’s intentions?

​Karake:  There is cautious optimism, but also concern over continued construction in the settlements. The prisoner release does create trust between the sides, as I said, but the settlements must be halted as they thwart progress and create stumbling blocks. The two cannot go together, because it prevents the realization of the two-states-for-two-nations idea.

Al-Monitor:  Some people in Israel claim that release of prisoners encourages the continuation of terrorist attacks, and that it is connected to what is taking place on the ground in recent weeks.

​Karake:  The recent terrorist attacks were independent actions of solitary individuals who are not connected to the organizations. You have seen — and Israel has admitted to the fact — that the Palestinian Authority makes a tremendous effort to prevent armed activities. That is a Palestinian strategic decision, and we will vigorously continue to pursue this course of action. Therefore, there is no connection between the two.

Al-Monitor:  How are you preparing to receive the released prisoners?

​Karake:  We will hold a reception in their honor, and then each of them will go to their home and family. You have to realize that many have not been home for more than twenty years.

Al-Monitor:  The released prisoners will support a peace agreement with Israel?

​Karake:  Everyone supports peace. The Fatah movement has made its stance clear, and [the prisoners] are part and parcel of Fatah.