Despite prisoner release, any Israeli settlement construction may end talks

Palestinian Authority Minister for Prisoner Affairs Issa Karake has declared that if Israel insists on more settlement construction following the latest prisoner release, the negotiations will be over. 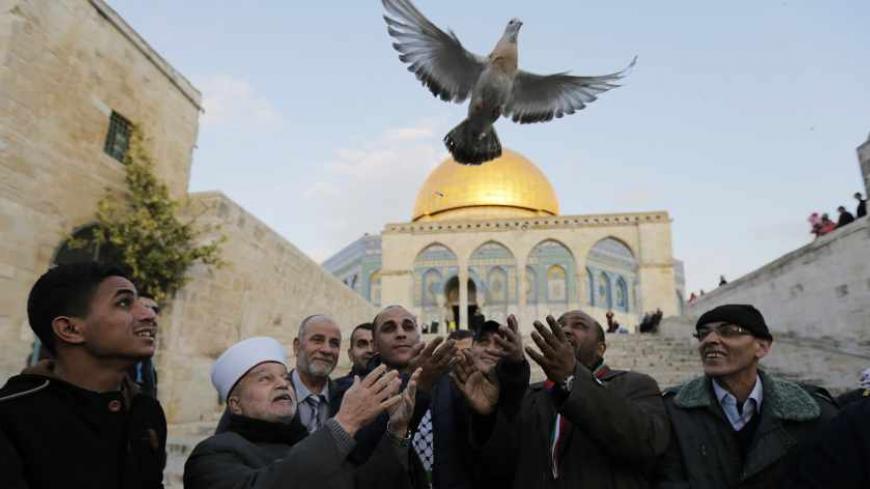 Ahmad Khalaf (fourth from right) looks on as a religious leader together with others release a dove outside the al-Aqsa mosque the day after he was released from an Israeli prison, in Jerusalem's old city, Dec. 31, 2013. - REUTERS/Ammar Awad

The third release of Palestinian prisoners was completed Dec. 31, and senior Palestinian Authority officials are counting the days to the fateful visit of US Secretary of State John Kerry to Ramallah at the end of next week. The Palestinian Authority is concerned that Israel will announce additional construction in the settlements in the time between the prisoner release and Kerry’s visit. This pattern of announcing construction simultaneously with the release of prisoners is an old story to the Palestinians and has already threatened to derail the talks in the past.

We recall how the Palestinian negotiating team headed by Saeb Erekat resigned after the second prisoner release wave when Prime Minister Benjamin Netanyahu’s office announced, simultaneously with the release of the 26 prisoners, construction tenders for 5,000 new housing units in the settlements.

Recently, political sources leaked to the Israeli media that Netanyahu intends to announce additional construction in the settlements once again. This time, however, it is rumored that the construction will not be confined to the large settlement blocks but will also take place in additional Judea-Samaria settlements.

Again, the “prisoner-release compensation” equation also threatens to halt the talks, but this time for good. In an interview with Al-Monitor, Palestinian Authority Prisoner Affairs Minister Issa Karake warned unequivocally that if Netanyahu announces another round of construction in the settlements, the Palestinians will announce the end of the talks. In such case, no Palestinian leadership representative would be willing to appear to the Palestinian public as a collaborator, or as the one who participated, even only tacitly, in promoting additional construction in the settlements.

Karake’s interview took place a short time after the onset of the release of 26 prisoners from Israeli prisons, when 18 of them made their way to the Mukataa for a festive reception organized by Palestinian Authority Chairman Mahmoud Abbas (Abu Mazen). Karake admitted in the interview that he and all the Palestinian Authority heads are waiting to see whether Netanyahu makes the same connection between releasing prisoners and settlement construction.

“We are certain that if it happens again, no one will be able to salvage the talks, and this time, no intervention on John Kerry’s part will help,” said Karake. Excerpts from the interview follow.

In other words, if Netanyahu announces additional construction, then you will terminate the talks?

“Absolutely. You can’t conduct talks on a peace process when construction continues — construction designed to trip up the entire process.”

Are talks really underway? Did the release of prisoners, which was accompanied by intense public criticism in Israel, advance or contribute something to the discussions?

“There are no discussions. People talk, but you don’t make peace just from people sounding off.”

Indeed, ever since Palestinian negotiating team members Erekat and Mohammad Shtayyeh resigned Oct. 31, the talks have run aground. The assessment is that Kerry’s anticipated visit to the region during this coming weekend is meant to save the whole process. It is believed that Kerry will present new guidelines that will extend over 15 years, evidently on the assumption that the two sides, Israelis and Palestinians, are unable to reach agreements under the current circumstances.

If so, I asked Prisoner Affairs Minister Karake, why does he think Israel is releasing "heavy" prisoners with life sentences, when it seems that no talks are even underway? Karake explained that Israel obligated itself to the United States to release the prisoners. Israel committed itself to a guideline for the release of 104 prisoners in four waves, the last of which would take place in March 2014.

From Netanyahu’s point of view, this step was designed to avert the settlement freeze demanded by the Palestinians as their precondition for renewing the talks. But they also did not imagine that an agreement not to freeze the settlements would turn into a construction boom every time prisoners were released.

Can you understand the connection that Netanyahu makes between the construction and the release of the prisoners?

“Of course we understand; it is meant to pacify the Israeli right and preserve his government, but this is the place to ask what is more important: the intactness of the Netanyahu government or the peace process? To us, it is clear what Netanyahu prefers."

And if that weren’t enough, the Ministerial Committee for Legislation approved a bill at the beginning of the week [Dec. 29] calling for Israel’s annexation of the Jordan Valley. In other words, another obstacle is placed before the negotiators. The issue of security in the Jordan Valley is a key issue that was discussed by the negotiating teams before the talks ran aground. According to a Palestinian source, the gaps that emerged between the sides on this issue were enormous. In a speech delivered by Abbas at the reception for the released prisoners, he commented on the bill by saying, “The valley is our land and will remain as such. It is a red line as far as we are concerned.”

“That is clear, but we hope that common sense will prevail over bills meant to trip up and destroy [the peace process].”

Is there a chance that John Kerry will succeed in convincing you to give tacit approval to the additional settlement construction in order to ensure the completeness of Netanyahu’s government?

“There is no chance. Another declaration about construction in the settlements will bring about the end of the talks, and there will be nothing more to talk about.”

Now, everyone is waiting for Kerry. Will he succeed in again convening the two sides to talk? Will he succeed in averting another crisis? And if he does succeed this time, what does that mean for the entire process in which we don't know about any agreement yet, only more and more new red lines?