Israeli Prime Minister Benjamin Netanyahu's decision to publish construction tenders, whether real or not, is likely to frustrate US policy-makers. 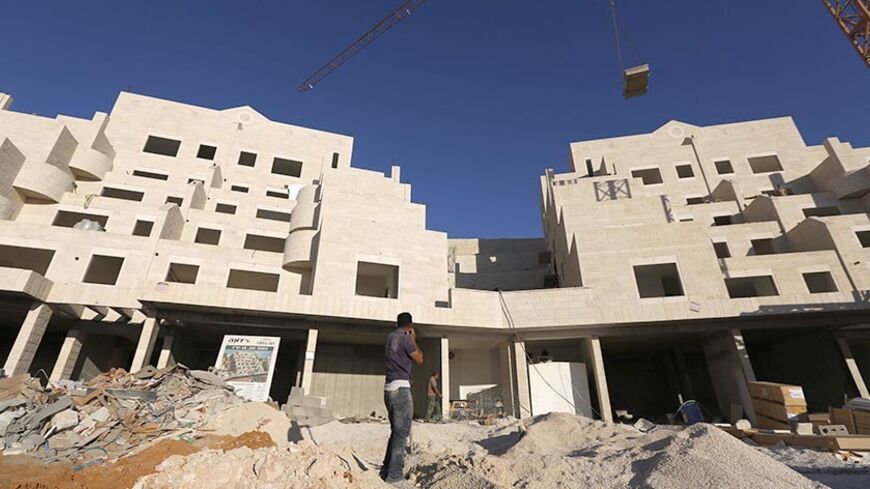 Palestinian laborers work on a construction site in Pisgat Zeev, an urban settlement in an area Israel annexed to Jerusalem after capturing it in the 1967 war, July 28, 2013. - REUTERS/Baz Ratner

How can one describe Israel's insistence on strengthening the settlements while negotiations with the Palestinians are underway? Wisecracking? Arrogance? Disregard for international public opinion? Or perhaps merely a misunderstanding by the Israeli government headed by Prime Minister Benjamin Netanyahu of the significance of such a policy, its implications and its dangers?

On Jan. 10, it came out that the prime minister has given the green light for a new round of construction in the settlements as part of what has already been nicknamed the “prisoner release-construction” equation. Nothing helped — all the Palestinian warnings, requests and threats as to the destructive results of such a construction announcement were for naught. Ever since negotiations with the Palestinians began at the end of July 2013, the Netanyahu government has announced the building of 3,422 housing units in the territories (according to the NGO Peace Now's data), including “mountain ridge” settlements. These are the very settlements that are under discussion by the Israeli-Palestinian negotiating teams for possible evacuation in the framework of a future peace agreement.

In response to the “third pulse” release of 26 prisoners on Dec. 31, Israel’s Housing Ministry, under the current leadership of Uri Ariel, published tenders for marketing plots of land for about 1,900 residential units beyond the Green Line in Judea and Samaria and Jerusalem, bringing condemnations and threats upon Israel.

But before we examine the significance of boycott threats and sanctions on Israel, let’s make some sense out of the numbers. Not all construction tenders turn into actual buildings. From the moment a tender is announced until tenants actually enter their new apartments, at least three years elapse while plans are submitted and authorized and the actual construction is carried out. For example, plots in the Jerusalem neighborhoods of Pisgat Ze’ev, Ramot and Neveh Yaakov, which are included in the Housing Ministry’s latest announcement, were already marketed in the past. There were no takers then, and there is no guarantee that there will be interest now. In other words, sometimes the same tenders are announced repeatedly, evidently with the sole intention of demonstrating (to whom is unclear) that Israel is in the midst of a construction boom in the settlements.

Non-profits such as Peace Now, Ir Amim and Yesh Din keep track of all construction announcements and actual building in the settlements and check the identity of the owners of the land plots. They are all wondering now what Israel is trying to prove to the settlers, Israelis and the world. None of the people I spoke to has a clear and convincing answer, except for the assessment that Netanyahu is attempting to pacify the settlers and avert criticism from within his own party. In other words, he is working to maintain an intact government in the course of the negotiations with the Palestinians.

But this theory is only partial. The publicizing of the tenders, which (as expected) presents an obstacle for the continuation of the negotiations, was delayed for a week due to the visit of US Secretary of State John Kerry. In fact, the government didn’t even try to hide the fact that it refrained from publicizing the tenders at the same time as releasing the prisoners to avert an immediate crisis during Kerry’s visit to the region.

Meanwhile, criticism of the prisoner release has died down and demonstrations by the right and by bereaved families who were furious over the release of the murderers have stopped. That is the way of the world. So it is not clear who, exactly, Netanyahu wants to pacify now, 10 days after the release. Is the “prisoner release-construction” equation so holy that it justifies humiliating Kerry?

I wonder what the secretary of state and his State Department staff thought when they saw the headlines of important US newspapers such as the New York Times, the Washington Post, the Wall Street Journal and others. All of them emphasized the announcement of construction in the settlements after Kerry had left the region.

In other words, not only was Netanyahu’s delaying tactic unsophisticated, and not only did it fail to ward off American criticism of a very unwise step, it was even perceived as painful and humiliating. It was an unnecessary blow, peculiar and strange, to the already fragile trust between the Israelis and the Americans.

From my recent conversations with sources in the Palestinian Authority, it seems that they are preparing an alibi for casting blame on the Israelis for the collapse of the negotiations. A well-informed Palestinian source from Palestinian Chairman Mahmoud Abbas' office told me that they are keeping an exact tally of what they call “Israel’s violations of human rights and construction momentum in the settlements,” which they feel are the main obstacles in the talks.

The Palestinian “violations” portfolio will be publicized the day after the real, decisive battle for global public opinion begins. The Palestinians will probably not face an especially difficult fight. Israel is already at a disadvantage on the diplomacy front and each construction announcement, whether real or empty of content, brings on it another wave of criticism and threats of boycotts and sanctions.

Last week on Jan. 8, a Dutch pension fund divested its investments from Israel as a direct result of the provocation and disregard by the Israelis toward international public opinion. This is probably just a taste of what will happen here when negotiations come to a halt.