With European threats of sanctioning both sides in the background, US Secretary of State John Kerry will try again to convince Palestinians and Israelis to make concessions before it's too late. 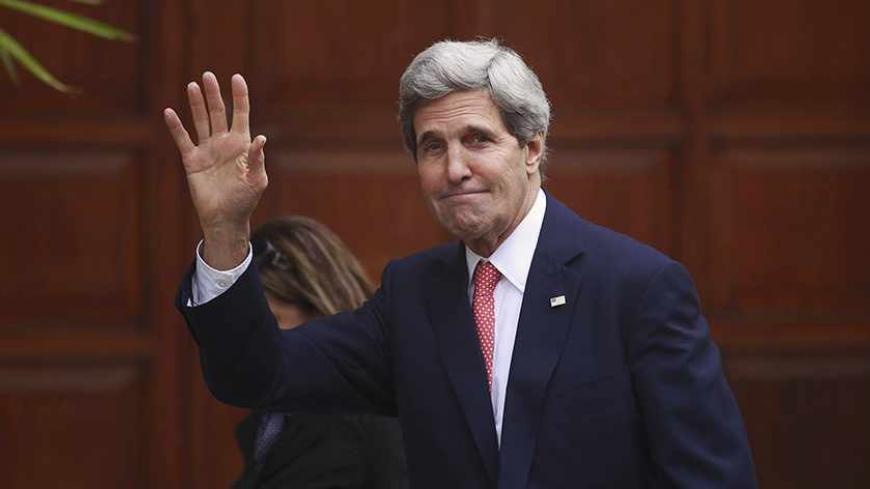 It is going to be a very interesting meeting. I wouldn’t mind being a fly on the wall when Israeli Prime Minister Benjamin Netanyahu and US Secretary of State John Kerry sit face to face and finally start to talk, after all the barbs and criticism that they’ve flung at one another and all the blows below the belt that they’ve exchanged over the agreement with Iran.

Though the Iranian episode is finished for now and the agreement signed is an irrefutable fact, there can be no doubt that it will be at the center of the talks. But Kerry didn’t come to Israel last night, Dec. 4, to listen to Netanyahu’s gripes. The US secretary of state came to save the failed negotiations with the Palestinians before they blow up in everybody’s faces. This is the last call before the participants get up and go their own ways. If Kerry fails to glue the negotiators to their seats, whether through threats, promises, or some combination of the two, there is no way anyone will be seeing white smoke coming out of the negotiating chambers.

What does Kerry have to offer? What tricks can he pull out of his sleeve this time? If the carrot and stick routine he used last time forced chief Palestinian and Israeli negotiators Saeb Erekat and Tzipi Livni to the negotiating table, even if they were dragged there unwillingly, the outline of “Yitzhar [Settlement] for Bushehr [Iranian nuclear reactor site],” assuming there really was such one, is no longer relevant. The Israeli side won’t be buying any more promises about Iran’s nuclear program.

Given all that, it is kind of surprising that the salvation might yet come from Europe. The EU, which has been watching events unfold from a distance with considerable concern, is more capable now of having an impact on the progress of negotiations between the two sides. Outside the negotiators’ inner sanctum, the name of Catherine Ashton, EU high representative for foreign affairs and security, is more intimidating and terrifying than that of Kerry or even the name of US President Barack Obama.

Israeli journalists covering the negotiations with the Palestinians were invited to attend an EU conference this week, Dec. 3, in Brussels. While there, they heard explicit threats from senior officials in the EU, directed at both the Israelis and the Palestinians. These mutual threats were intended to show the guests that Europe is not some partisan player, and it has the ability to impose painfully effective sanctions on both parties.

When it came to Israel, Europe’s shot across the bow was already quite familiar. The Europeans threatened to tag and boycott products produced in the settlements. What really was surprising was a simultaneous threat made to the Palestinians: Europe threatened to cut off economic aid to the Palestinian Authority (PA), amounting to 300 million euros [$410 million] per year in the event that the talks fail. This money has so far prevented the PA's total economic collapse. In other words, turning off this aid, which has been provided to the Palestinians ever since the Oslo Accords were first signed in 1993, would effectively be a death sentence for the PA.

Catastrophic scenarios if and when the talks reach a dead end can be heard from every corner. These scenarios explain Kerry’s urgent visit to the region, without any fresh carrots to distribute to his hosts. But the European threats are especially ominous. They help Kerry explain to both parties that without making a supreme effort to reach an agreement, they will both come out losers. The PA will collapse (a process that will have implications for Israel as well), while threats of a boycott against Israel will only worsen, and the country will find itself more isolated than ever.

Kerry and his team must first ensure that the third pulse in the release of Palestinian prisoners, scheduled for January, goes through without a hitch. It is well worth remembering that the second pulse, which took place last October, almost caused the talks to explode. To win back Israeli public opinion and, more particularly, the opinions of the settlers, Netanyahu decided to announce the construction of thousands of housing units in the West Bank. Originally, the prisoner release was intended to strengthen PA Chairman Abu Mazen. In the end, it came right back at him like a boomerang.

In just three weeks, Israel is supposed to release the third group of the 104 prisoners it committed to releasing to get the talks started. Kerry knows with absolute certainty that if Netanyahu announced settlement construction designed to appease settlers, the negotiations are over. The Palestinians have made this perfectly clear.

But this isn’t the only problem that the American team will have to address, which was recently joined by David Makovsky, former editor of the Jerusalem Post and director of the Project on the Middle East Peace Process at The Washington Institute. The team is fully aware that public opinion among both the Israelis and Palestinians is very critical of any potential compromise, and that any agreement that is reached, if it is reached, will have to pass the test of public opinion first. Both Netanyahu and Abu Mazen are weak. They are incapable of making bold decisions.

How, then, is it even possible to lay the groundwork for the signing of an agreement? It is no simple problem. It is, in fact, the kind of problem that all the parties involved in the negotiations are dealing with.

On one hand, the talks are secretive. Only Kerry is authorized to discuss the negotiations because of the very real fear that any leaked detail could lead to an explosion. On the other hand, the very fact that the parties are talking is well known and drawing considerable attention. This is not some new iteration of the Oslo Accords, which burst onto the world stage unexpectedly and gave birth to far-reaching expectations about the dawn of a new era in the Middle East.

That sense of optimism has long since vanished. This time, both sides, Israelis and Palestinians alike, are exhausted. They both bear the scars of past experiences and are disappointed by what they have seen. And ever since the Oslo Accords collapsed, they have amassed even more opponents — among Hamas and the Israeli right — than they had when the agreement was signed 20 years ago. That is why this time, everyone must tread carefully. With the constant assistance of the American team, they must formulate an agreement in which each side makes painful concessions and takes risks. And yet, at the same time, not to anger public opinion back home, and try to win the support of most of their respective electorates.

Sadly, there is yet another obstacle that Kerry will encounter during his current visit to the Middle East. As a result of the agreement with Iran, the United States has gone overnight from being a loyal ally to a mediator whose ability to handle conflicts and crises has been called into question by Israelis. As Kerry tries yet again to dismantle the minefield, this is yet another new reality that he will have to face. Given this challenge, Kerry may yet have to remind us of that famous equation, which so many of us seem to have forgotten: Israel without firm support from the United States is like the PA without regular financial aid from the EU.