Kerry’s Trip to the Middle East: A Failure Foretold

US Secretary of State John Kerry failed to understand that Israeli and Palestinian leaders are both currently tied to public opinions and cannot make the necessary concessions. 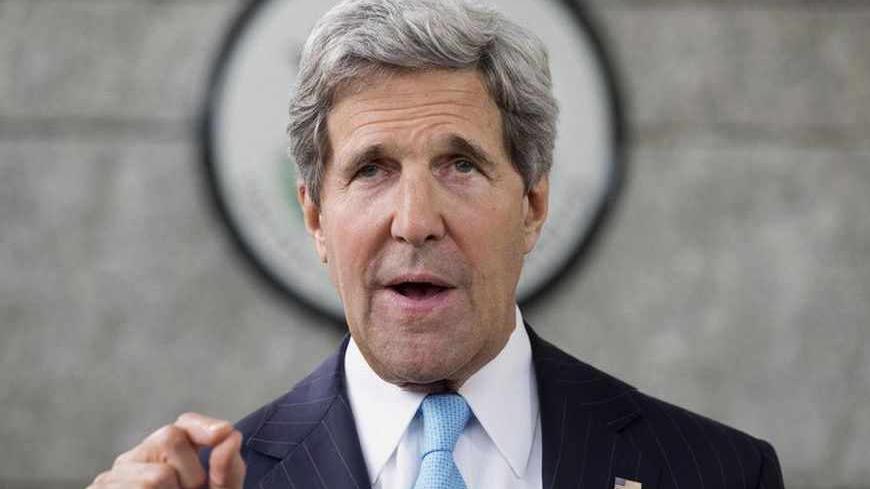 So US Secretary of State John Kerry went back to Washington empty-handed again.

Very few people were surprised by the failure of this trip. Before his flight took off so that he could deal with all the other problems weighing down on him, the US secretary of state managed to hold a brief news conference in Ramallah. Using the most noncommittal language he could muster, Kerry said that there had been some progress in the talks, and that he’d be back to try again.

Palestinian spokesmen close to the negotiations told Al-Monitor that the only progress Kerry made during this last trip was that he learned how the differences between the parties have only become more evident, and how Prime Minister Benjamin Netanyahu and Palestinian Chairman Abu Mazen both know now exactly what they have to do to give peace a chance.

As for Kerry, what he took away from this naïve journey was something that he should have known before setting off on his grueling trips across the region: Netanyahu and Abu Mazen can’t enter into negotiations, no matter how much they want to. Both men have surrounded themselves with people firmly opposed to compromise. They’ve dug themselves into their positions and fired off a volley of bombastic slogans that are etched deeply in the minds of the Israeli and Palestinian public. They’ve both climbed up trees that are simply too high, and as things now stand, there is no one out there to hand them a ladder so that they can climb back down and make “the peace of the bold.”

The conditions that Abu Mazen has set for his official re-entry into negotiations with Israel are the release of Palestinian prisoners who received life sentences before the signing of the Oslo Accords, an agreement that the 1967 borders will serve as the basis for negotiations, and a freeze on settlement construction, at least in those settlements that are not part of the major settlement blocs.

Why is Abu Mazen so insistent, and why is Netanyahu refusing to be flexible? Ostensibly, the explanation is simple. These two debilitated leaders, surrounded by an array of opponents, have one criterion on which they base their actions: public opinion trends that they themselves created. They have put much effort into raising these rotten fruits. Now it’s time to eat them.

Throughout his previous term in office, with the help of his former Foreign Minister Avigdor Liberman, Israel’s prime minister used every forum to explain that there is no partner for peace, that there is no one to talk to. Wherever he was, he stridently reiterated that despite Abu Mazen’s statements and declarations, the chairman of the Palestinian Authority is an obstacle to peace. According to Netanyahu, Abu Mazen acted unilaterally to bring about the failure of any possibility of dialogue and real negotiations.

So how can Netanyahu now go about releasing prisoners with blood on their hands to a “non-partner,” who is an obstacle to peace? How can Netanyahu explain that he is making a gesture of good will to that self-same Abu Mazen, just so that he will agree to enter into negotiations with Israel?

When 1,000 Hamas prisoners were released in the [Israeli kidnapped soldier] Shalit deal, the Israeli public indulged Netanyahu with understanding. The abducted soldier was finally returning home. What it cost to bring him home was a lot less interesting. TV cameras focused exclusively on Gilad Shalit’s gaunt face, and it was only at the end of the day, after all the celebrations in Israel and the endless news report covering the story, that air time was finally devoted to images of the prisoners’ release and the massive rallies organized to greet them in Gaza and Ramallah. It was obvious to everyone that this was the price that needed to be paid, and Netanyahu was able to use that successfully to counter any public criticism of how he broke the longstanding taboo against releasing prisoners with blood on their hands.

“The murderers that Abu Mazen demands be released,” as was splayed across the headlines of Israel’s newspapers, first went to jail more than 30 years ago, and are considerably less dangerous than the Hamas prisoners, who were released in the Shalit deal. That is not just because of their advanced age, either. It also has to do with their organizational affiliation. Fatah has a different world view, and its approach to the conflict with Israel is certainly unlike that of Hamas. But while the Shalit deal provided us with an exhausted, skeletal soldier, all Israel gets in the Abu Mazen deal is a partner who has been vilified for years, and who is sometimes referred to in Israel as a “political corpse.”

That is exactly why Abu Mazen insisted on the release of prisoners. Throughout the long years of diplomatic stalemate, the chairman of the Palestinian Authority also declared that he would never return to the negotiating table as long as Israel does not freeze construction in Judea and Samaria entirely. He said that from the podium of the UN and from under any blooming tree. How can he now explain to his people that he finally succumbed to pressure and agreed to allow construction to continue in the large settlement blocks?

The solution that his closest advisers came up with was to request the release of prisoners and to display them proudly in a victory parade in Ramallah. That way he could show his constituents that the way of peace that he chose to follow is far preferable to the way of terror advocated by Hamas.

Ramallah had hoped that the celebrations marking the release of prisoners would empower them and send an optimistic message to the Palestinian public about the launch of talks with “Israel’s right-wing, refusenik government.” Without Israel’s agreement to a gesture of this sort, there is no chance that any of the Palestinians close to Abu Mazen, or any of his opponents for that matter, will hand him the ladder he needs to climb down from and sit at the negotiating table.