Kerry's Secret Plan for Peace In the Middle East

US Secretary of State John Kerry, hoping to jump-start the peace process, brought a compromise proposal to Jerusalem and Ramallah last week. 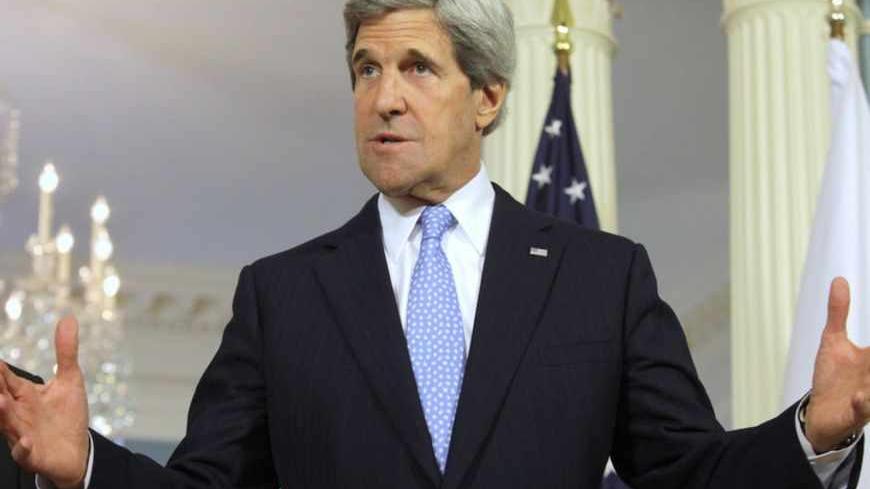 US Secretary of State John Kerry talks to reporters at the State Department in Washington, May 10, 2013. - REUTERS/Yuri Gripas

Palestinians and Israelis alike were asked to maintain confidentiality around the “diplomatic secret,” which, it was hoped, would finally lead to productive negotiations between the two parties. Nevertheless, after a meeting of Fatah’s Central Committee in Ramallah on May 11, the details of the proposal were revealed. During his last visit to the Middle East in early April, Secretary of State John Kerry apparently suggested a compromise that would bridge the deep divide between both parties, and put an end to the long-lasting disconnect between them.

According to this new proposal, negotiations between Israel and the Palestinians would commence in June, after Israel makes a commitment to halt construction in those areas of the West Bank that lie outside of the major settlement blocks. In other words, it would freeze construction in the central mountain range of the West Bank and effectively “dry up” the illegal settlements and outposts. For their part, the Palestinians would stop all their diplomatic efforts to win support in the General Assembly of the United Nations and withdraw their demand that Israeli officers be tried in international courts of law.

The underlying logic behind this proposal is that it could be acceptable to both sides. The Palestinians, who demanded a total freeze of construction in the West Bank as a precondition for entering into diplomatic negotiations will receive a partial freeze, while the Israelis, who claimed that there can be no negotiations with preconditions, can continue to build in the major settlement blocks. By the way, it is worth noting that even before each side expressed its position, Kerry asked Palestinian Chairman Abu Mazen to wait until he received an answer from Israel about the big move that he was planning.

In response to the permission that the proposal grants Israel to continue its building projects in the major settlement blocks, the Palestinians demanded of Kerry that they be granted “Palestinian construction,” or as they defined it, the right to engage in “development and maintenance in Area C,” which comprises some 60% of the entire West Bank. At the same time, they also demanded the release of Palestinian prisoners, a step that would be considered a major achievement for Abu Mazen, and which would make it easier for him to return to the negotiating table. It should also be noted that Israel has yet to respond to this proposal. And the Palestinians have not informed Kerry whether they are prepared to allow Israel to continue its construction in the major settlement blocs.

One of the most interesting elements of the aforementioned American proposal is that both sides are maintaining a low profile. The US is taking Prime Minister Benjamin Netanyahu’s sensitive political status with his coalition partners, most notably the HaBayit HaYehudi party, into consideration. Similarly, the US is aware of the intense pressure that will be placed on Netanyahu by the large and well-oiled settler lobby, both in and out of the Knesset. As a result of this, any understandings between the parties, if and when they are reached, will be kept secret so that negotiations can begin without any undue pressure or demonstrations. At the same time, Israel will make a commitment that any construction in the settlements will only occur after the utmost consideration, and without any “bells and whistles.”

The Americans are also aware of the precarious situation faced by the Chairman of the Palestinian Authority Abu Mazen. It is obvious to them that he cannot make any decisions that can lead to him being portrayed as submissive to the Israelis, and are therefore investing in quite a bit of groundwork in the “friendly” Arab states. This provides some context for the statement by Qatari Prime Minister Hamad bin Jassim bin Jaber al-Thani that an exchange of territories between Israel and the Palestinians as part of a permanent solution is acceptable to the Arab League.

Nevertheless, while the US was engaged in softening the positions of those friendly Arab states so that they offer support to Abu Mazen, Israel announced that it had approved the construction of 300 new housing units in the settlement of Beit El.

The Palestinian response was forthcoming. Chief Palestinian negotiator Saeb Erekat released a furious statement charging that Israel has proven yet again that it is not ready for negotiations and that it does not support the principle of a two-state solution. By the way, Erekat and the other Fatah representatives who met in Ramallah remained committed to their promise not to respond publicly to the American compromise proposal, knowing that the release of any information about it could lead to harmful pressure being applied to both sides.

One question that should be raised is whether Israel’s announcement that it is expanding construction in Beit El is, in effect, its way of saying “No” to Kerry. Alternately, could this be its way of improving its position before the “responsible adult in the room” returns to the region next week. This is, of course, a regular pattern that Israel has shown in all previous “advanced” stages. It acts quickly to gain some achievement or other, to establish more facts on the ground, and to let off steam “in advance.” Be it in advance of a new ceasefire, or in advance of a freeze on construction.

But before anyone even begins talking about a partial freeze on construction and secret negotiations, Israel must first come to grips with the million dollar question: Is the principle of a two-state solution based on minor adjustments to the 1967 borders acceptable to it or not?

Regardless of what the answer really is, when John Kerry arrives back here next week (May 21-22), he is bound to discover one incontrovertible truth: If the two parties have no real desire to make progress, even the most creative compromise proposal will not succeed in doing the work for them.