Palestinian efforts to obtain support from the European Union bore fruit this week with the adoption of economic sanctions against the settlements. 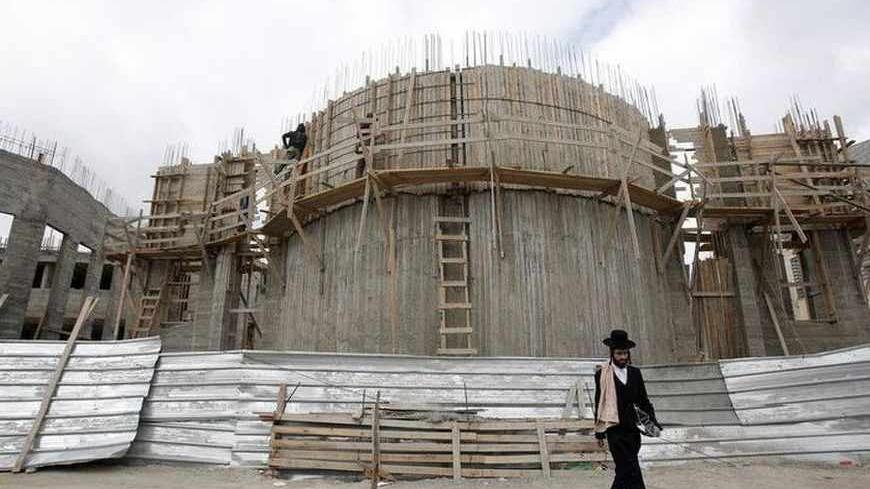 Palestinian laborers work on the construction of a synagogue as an ultra-Orthodox Jewish man walks past in the West Bank Jewish settlement of Beitar Ilit, near Bethlehem, March 18, 2013. - REUTERS/Baz Ratner

US Secretary of State John Kerry is making efforts to renew negotiations between Israelis and Palestinians and declared in Amman on July 17 that certain progress has been made by the parties. Even before this declaration on negotiations, the Palestinians registered yet another achievement, and they are pleased. Very pleased. The target was well defined, the direction clear, and the results followed apace. All of Europe is against the settlements. The European Union has decided to demarcate the Israel-Palestine border, distinguishing between Israel within the Green Line and Israel of the settlements. In fact, it is imposing significant economic sanctions on Israel, at least until it gets back to serious negotiations.

Europe was first marked as a target more than two years ago, when Palestinian Authority (PA) Chairman Mahmoud Abbas (Abu Mazen) and senior Palestinian officials, including Saeb Erekat, Yasser Abed Rabbo, Hanan Ashrawi and then-prime minister Salam Fayyad, discovered much to their chagrin that the United States had decided to impose a veto on a proposal to admit the Palestinians to the United Nations as the organization’s 194th member state. At the time, all of Abu Mazen’s efforts had been to no avail in explaining to then-secretary of state Hillary Rodham Clinton that the move at the United Nations was being taken out of sheer desperation and disappointment over the absence of a diplomatic process. The same held for his promise to put the move on hold if negotiations were renewed.

Senior Palestinian officials had come to view the United States as a significant obstacle and started looking for a way to circumvent it. Disappointment arrived in May 2011, when Israeli Prime Minister Benjamin Netanyahu visited the United States and on May 24 delivered a speech that was received enthusiastically by both houses of Congress. “The status of the settlements,” Netanyahu declared, “will be decided only in negotiations. But we must also be honest. … In any peace agreement that ends the conflict, some settlements will end up beyond Israel’s borders. … But … the border will be different than the one that existed on June 4, 1967. Israel will not return to the indefensible lines of 1967.”

The prime minister’s statement was met with resounding applause. After watching the speech live on television, Tayeb Abdel Rahim, secretary-general of the PA and a close confidante of Abu Mazen, summed up the desperation he felt: “If Abraham Lincoln and George Washington were to come back to life, they would not get the same reception that Netanyahu got. … What happened in Congress reminds me of the parliaments of dictators old and new. It bolsters and encourages the Israeli right.” Abu Mazen, already busy with an alternative plan to get the PA accepted as a UN observer state (but not as a full member), instructed senior officials to launch a major effort to obtain European support, hoping that Europe would influence US President Barack Obama.

He formulated a work plan that would include all senior officials in a diplomatic campaign, and in accordance they set off on frequent visits to Europe to convince the Europeans to support them. The officials all received one or more countries for which they would be responsible and established routine working relations there. They flew to the United Kingdom, Germany, the Netherlands, Sweden, France and Belgium among other states. They met with everyone they could, including parliamentarians in parties not in power.

A Palestinian source told Al-Monitor that Erekat, Abed Rabbo, Ashrawi, Rahim and others, including representatives of the PA stationed in Europe, performed like soldiers in the field. They were each equipped with a list of prepared messages, such as Netanyahu doesn’t want negotiations. The settlements are an obstacle to negotiations. Israel is continuing its aggressive building campaign in the West Bank and establishing facts on the ground. The most important message of all was that the Palestinians are prepared to make peace, and they are prepared to make concessions, because the current status quo is dangerous and makes a future agreement impossible to reach.

European leaders, without a foothold in the Israeli-Palestinian negotiations until then, received the Palestinian representatives warmly and with great understanding. This led to the development of the PA’s “European orientation,” which reached its climax during the past few months. This affinity to Europe was also one of the reasons behind the appointment of Rami Hamdallah, president of al-Najah University, as PA prime minister. Hamdallah is European in orientation and education, but inexperienced politically, which is apparently why he resigned, postponed his resignation and resigned again before he even had time to warm his seat.

Once Abu Mazen and his people found an attentive audience in Europe, the next stage of their plan went into force. They sought to convince the Europeans that without dramatic steps being taken, there would be no shift from the ongoing diplomatic stagnation. According to one Palestinian source, the decision to exclude the settlements from all of Europe’s agreements with Israel was finally taken after the failure of Secretary Kerry’s last mission to the region in June.

The feeling among the Palestinian negotiators was that the United States is not putting enough pressure on Israel in the Kerry era, when it should, for example, be demanding a freeze on settlement construction. This is the message that they took to the European Commission, with a request that it impose sanctions on Israel that would cause the “subjective intermediary,” that is, the United States to reassess the situation and fall in line with them.

Europe took the Palestinians' side on the issue, and sanctions against Israel began to take shape. They are now a fact. The EU is siding with the Palestinians, the Americans are siding with Netanyahu, and Kerry will keep coming to the region, even though his last visit here had no tangible results. The PA is pleased with itself, but no one is celebrating or coming out with declarations against Israel that would upset the Americans. The next stage in the Palestinian plan is to stay silent and keep working.