According to a Palestinian source, no understanding has been reached so far by the negotiating parties. 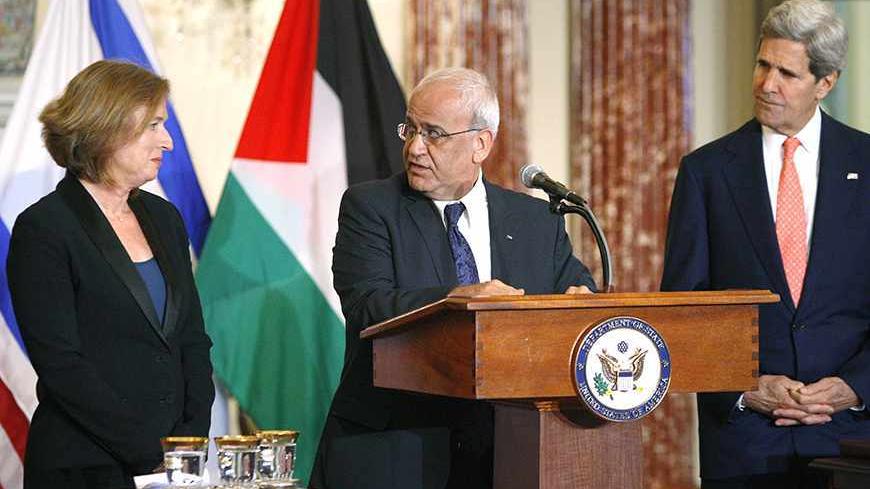 From the moment that American Secretary of State John Kerry announced the renewal of talks between Israelis and Palestinians on July 19, very few believed that an agreement would be signed at the end of the nine months. The optimists reckoned that while it was possible to end the conflict, the time allotted to it was too short. The prime minister’s representatives and associates fed this optimism when they explained that Prime Minister Benjamin Netanyahu understood that he would be forced to make painful decisions in exchange for peace with the Palestinians. The pessimists reckoned that the time factor was the smaller hurdle in the obstacle course traversed by the negotiating teams. But neither the optimists nor the pessimists anticipated that after only three months of talks, every spark of hope would disappear and the only issue on the table would be who was at fault.

The Palestinian negotiating team resigned, but Palestinian Authority Chairman Mahmoud Abbas (Abu Mazen) was delaying his acceptance of the resignation in an attempt to persuade Palestinian chief negotiator Saeb Erekat and Mohammed Shtayyeh to change their minds. The chairman of the authority did not want the Americans to claim that the Palestinians were the ones to torpedo the talks. In other words, the economic aid that John Kerry promised to the authority was the only thing that prevented Abu Mazen from announcing the failure of the negotiations.

A high-level Palestinian source told Al-Monitor that not even one agreement had been achieved in the discussions so far, not even regarding marginal topics that were not defined as core issues. According to the source, not only has there been no progress, but there has been regression: Israel’s announcements about continued construction in the territories caused the Palestinian public to direct harsh criticism against its representatives in the talks, causing them (the negotiators) to harden their positions around the discussion tables. The highly placed source said that when the Palestinian team complained about this to Tzipi Livni, head of the Israeli team, she expressed her understanding of their perspective, but argued that this [the construction] reflected the Israeli political reality and, nonetheless, a way must be found to make progress.

On the Israeli side, the controversy between Netanyahu and Kerry on the Iranian issue, which was well publicized in the media, does not contribute to the situation or improve the already dismal atmosphere. If anyone in Israel had thought that the United States and Israel would join hands and march, well synchronized on the Iranian and Palestinian fronts (what was nicknamed in Israel, “Yizhar [Israeli settlement] in exchange for Bushehr [Iranian nuclear site]'') — they were proved wrong very quickly. Ever since Iranian President Hassan Rouhani’s speech in the UN General Assembly and the opening of the talks in Geneva, the paths of these two allies have diverged, at least for the short term. The United States marches toward an agreement with Tehran, while Netanyahu remains almost alone in the objector’s camp. If there had ever been a package deal connecting Iran and the Palestinians — it was clear that this path is no longer on the table.

When the talks were renewed, representatives in the prime minister’s environs promised “surprises” and explained that he is ready to make a dramatic diplomatic decision that would avert Israel’s isolation. Netanyahu agreed to release prisoners with blood on their hands, and his associates said that he was willing to discuss all the issues on the table, including Jerusalem’s status and delineation of the borders of the future Palestinian state. The prisoners were, indeed, released but soon afterward provocative statements were released about building in the territories. The negotiators had not managed to touch upon even one critical issue before the negotiations exploded. Simultaneously, Economy and Trade Minister Naftali Bennett embarked on a media campaign in the United States where he argued that Israel was not an occupying nation because the entire land of Israel belonged to it.

We remain with stalemated negotiations and one big mystery: Has Netanyahu really changed? Was the release of Palestinian prisoners meant only to play for time? Were the announcements about new construction in the settlements a political necessity or maybe a way to embarrass the Palestinians and cause them to end the talks? All we can do is start the countdown to the end of the talks in the spring to understand what actually took place behind the scenes. One thing is already clear today: This winter will not end in a diplomatic spring in the Middle East.