Israeli-Palestinian Talks: The Perils of Pessimism

Some cautiously optimistic signals from the Israeli-Palestinian talks in Washington. 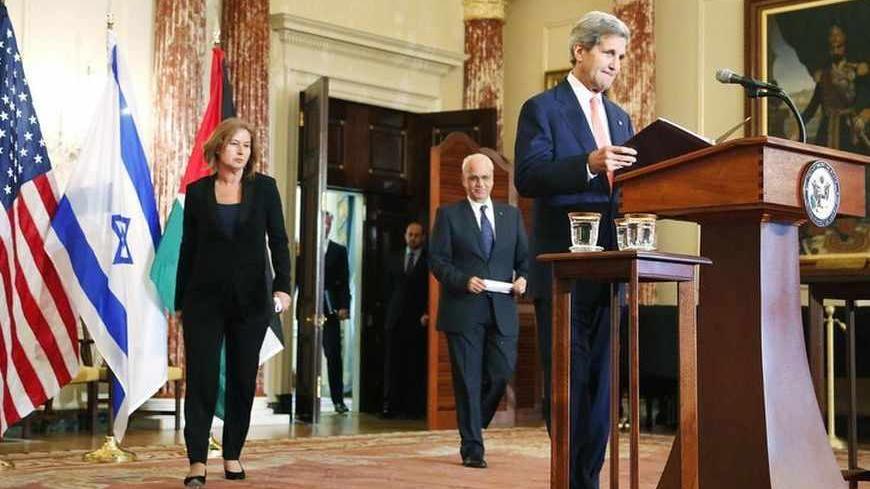 US President Barack Obama surprised the Israeli and Palestinian representatives who began negotiating on this week in Washington. He abandoned protocol and came to meet the parties, not just to support and encourage them, but to add something of a celebratory mood to the event. American expressions of optimism are crucial to the success of the talks, because among the officials in the world who are familiar with the complexity of the issues, only a few believe that these talks will end with a final status arrangement. It is quite safe to assume that the Israeli public is similarly convinced that there is no way that this round of negotiations will lead to any achievements whatsoever, given Israel’s right-wing government and Palestinian Chairman Abu Mazen’s weakness in the Palestinian Authority (PA).

The skepticism and low expectations that accompany these talks, which had been suspended for years, are reflected in the way that they are covered by the Israeli and Palestinian media alike. There are no festive announcements, no dramatic headlines, no breaking news reports and no special broadcasts with a spectrum of commentators. Actually, there is absolutely nothing to indicate to the viewers that something really important is happening right in front of them. News broadcasts on radio and television, as well as newspaper headlines, do not relate to the preparatory talks between Minister of Justice Tzipi Livni and Palestinian negotiator Saeb Erekat as a major news story.

The national budget, which was brought before the Knesset this week for approval, evoked greater interest than the peace talks, since everyone is already convinced of their outcome. Senior journalists and commentators in the Israeli media, who set the tone for public opinion, are sure that the talks will eventually blow up. It is only a matter of time. The most common assessment is that the chances of these talks ending with yet another round of violence is considerably higher than the likelihood that Prime Minister Benjamin Netanyahu and Palestinian Chairman Abu Mazen will stroll down the red carpet together on the White House lawn.

Given the range of complex issues and difficulties that the parties must contend with, it really is hard to believe that they will be able to reach a final status arrangement. As was written here last month, this pessimistic assessment is based mainly on past experience. It relies on the assumption that Netanyahu is neither willing nor able to pay the political or diplomatic cost of reaching a peace agreement. The fact that Abu Mazen has no solid backing among the Palestinian public does not improve the chances either. The PA chairman will be forced to make difficult decisions as part of a final agreement. He may have to give up parts of the West Bank, turn a blind eye to settlements that will remain in place, concede Jerusalem’s status as the capital of Israel and make further concessions regarding the fate of the refugees.

Nevertheless, at the same time, there are also some optimistic messages coming from both the Israeli and Palestinian teams. People in Abu Mazen’s immediate circle have spent the past few days trying to instill some hope among mid and low-ranking officials in the PA. Based on closed-door talks they held with the PA chairman, Saeb Erekat and other senior officials, they have learned that the negotiating team does have a sense of cautious optimism about the chances of reaching an agreement with the Israelis. They received the message that Abu Mazen and the negotiating team believe that Netanyahu has reached a historic decision to end his current term in office with a final status agreement under his belt. They claim that Netanyahu, like former Prime Minister Ariel Sharon before him, wants to go down in history as a harbinger of peace, not as someone who rejected it.

Various individuals on the Israeli side, who are also involved in the diplomatic process, are also trying to improve the mood and are hinting to senior journalists and commentators that it would be a good idea if they were to take their pessimism down a notch or two. Signs that Netanyahu is approaching these talks seriously can also be seen in practice. Apart from his decision to release 104 Palestinian prisoners, including murderers with blood on their hands, Netanyahu has also decided to put any agreement with the Palestinians before the people in a referendum. By doing so, the prime minister will be able to defuse some of the fierce opposition to any Israeli withdrawal from the territories, anticipated from the Likud party's Central Committee and even from his own government.

Abu Mazen is also showing signs that he is preparing himself for the decisive moments up ahead. After clashing with Fatah’s major institutions, much the same way that Netanyahu clashed with the Likud party’s Central Committee, he realized that he will not have overwhelming support for any steps that include Palestinian concessions. According to sources within the movement, Abu Mazen is working furiously to bring about a change to the composition of the Palestine Liberation Organization’s Executive Committee and Fatah’s Central Committee. He wants to bring in his supporters and confidantes to help him pass a once-in-a-lifetime decision.

Do these steps indicate that both parties came to the negotiating table with good intentions? Apparently, the answer is yes. Is that enough? Not really. At the moment, there isn’t the slightest bit of trust between Netanyahu and Abu Mazen. The two men have no respect for each other. Furthermore, they both lack the courage needed to make any momentous decisions for which they will have to pay a steep cost, both politically and personally.