Prime Minister Benjamin Netanyahu's UN speech reflects his priorities, focusing almost entirely on the Iranian nuclear threat while referring only briefly to the negotiations with the Palestinians. 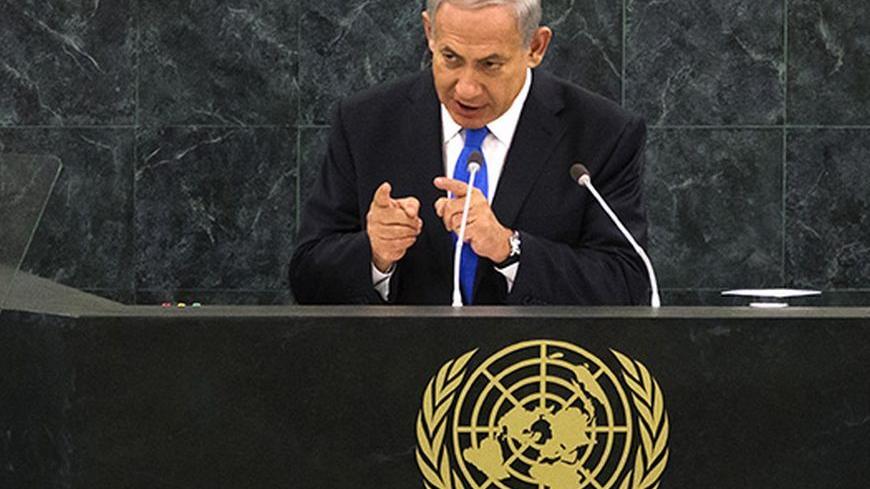 This week, a former senior official in Israel’s security establishment described Prime Minister Benjamin Netanyahu’s priorities to me: “Iran, Iran, Iran and only after that Syria and Egypt, and finally, the Palestinians.” He brought his palm down almost to the floor to stress to me how low the Palestinian issue really was on Netanyahu’s list of priorities.

Netanyahu’s speech before the UN General Assembly Oct. 1 confirmed how remarkably precise this description of Netanyahu’s priorities vis-à-vis the Palestinians really is.

Since talks between the Israelis and Palestinians were renewed in August, following a campaign by US Secretary of State John Kerry to exert pressure on both parties, stack upon stack of assessments have been written. As enormous doubts plague everyone, the question was and remains: Are the talks serious? Are the Israelis and Palestinians really willing and able to reach an agreement, or is it all an act forced upon the participants?

But every so often, people "in the know" leak to the Israeli media that this time, Netanyahu is very serious, and anyone who questions his readiness to reach a permanent arrangement and pay a painful price for real peace and security will be surprised. They might even eat their hats.

For reasons of full disclosure, I state here that I side with the skeptics — or, to be more precise, with the pessimists. I was even scolded by friends and colleagues for my pessimism.

But then Netanyahu appeared before the UN General Assembly and showed how indifferent he really is to the Palestinian-Israeli issue. Even if this “obsession with the Iranian nuclear threat” is understandable and acceptable to most Israelis, during this negotiation, which Netanyahu himself and everyone surrounding him are insistent on presenting as serious, the prime minister should have said so to his own people and the rest of the world. He should have shown that the peace negotiations are not some theatrical performance imposed on him by an American director named Kerry.

Netanyahu should have shown that there are other important issues on his agenda that must be resolved for the benefit of future generations. There are other things to do apart from trying to wipe the smirk off Iranian President Hassan Rouhani’s face. But instead, the prime minister’s only references to the Palestinian issue in his speech were a jab at Abu Mazen (Mahmoud Abbas), chairman of the Palestinian Authority, with whom he supposedly set off on a new path, and another very general statement at the end of his speech of Israel's commitment to peace. The latter actually sounded like an offhand remark, just to fulfill his obligation of lip service.

Netanyahu is certainly allowed to doubt the Iranian president’s "smile offensive." He can even criticize the US administration, which chose to give diplomatic means a chance in its effort to resolve the Iranian nuclear issue. And obviously, there is room to debate the approach and whether a disparaging speech chastising the rest of the world, when everything was already said and done, was really a wise move.

At the same time, it is important to ask whether there is any room left on the Israeli prime minister’s agenda in addition to “Iran, Iran, Iran.” Shouldn’t someone who declares that he is seeking peace and a comprehensive settlement with the Palestinians have convinced Israelis and the rest of the world that apart from Israel’s justifiable concerns over Iran obtaining nuclear weapons, there is also hope, and that there is also a real desire and genuine aspiration to resolve the Palestinian-Israeli conflict? After all, this conflict affects Israelis and threatens their lives and safety in the present no less than nuclear weapons would in the future.

At a time when Israel is threatened with international isolation, and there are calls for economic and academic sanctions, wouldn’t it be more prudent to devote at least some of the speech to the issue that threatens Israel’s standing in the international community?

So now, please allow me to return to my position of hopeless pessimism. I will continue to believe that the talks between Justice Minister and chief negotiator Tzipi Livni and Palestinian chief negotiator Saeb Erekat are little more than a blathering performance they are being forced to give. And allow me to repeat again like some overused mantra that without any serious work on the ground and a concerted effort to sway public opinion among Israelis and Palestinians alike, there will be no peace here — not now, and not for a very long time.

By the way, also allow me to adopt Netanyahu’s suggestion, made from the podium of the UN General Assembly: that it is necessary to pay close attention to what is being reiterated loudly and openly. If all anyone says is “Iran, Iran, Iran,” without leaving room for anything else, the prime minister of Israel really does not have any other priorities. I hope my friends will forgive me for saying that.