Israeli-Palestinian Interim Deal Is the Only Feasible Solution

In his UN speech, Palestinian President Abu Mazen rejected any possibility of an interim deal, but given the state of current negotiations, reaching a permanent agreement in the next months is impossible. 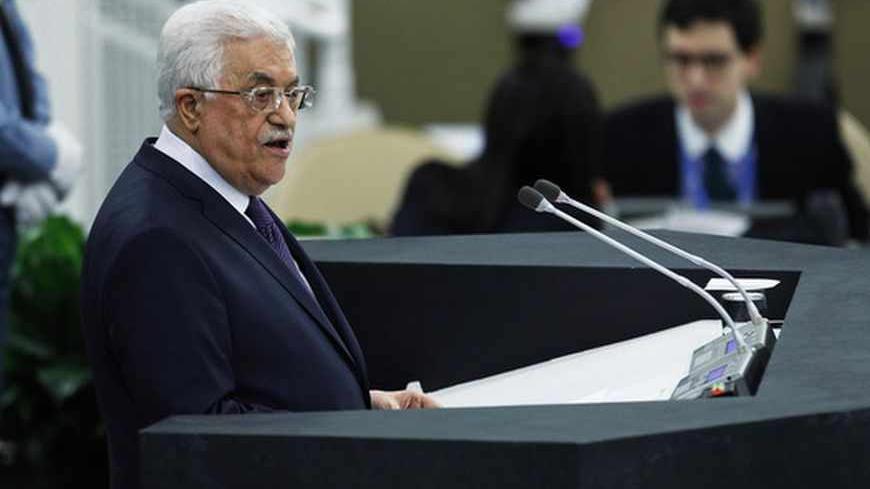 For the past two years, during the Palestinian Authority campaign for recognition as an independent state, Palestinian President Abu Mazen was a “star” at the annual gatherings of the United Nations General Assembly. Actually, the Palestinian issue as a whole was the focus of international attention. This diplomatic maneuver was only partially successful. The Palestinian Authority obtained observer nation status at the UN, but it was not granted recognition as a full member. The week of Sept. 26, Abu Mazen stood yet again before the countries' representatives at the UN. But this time, more pressing issues such as Iran and Syria thrust his speech to the agenda sidelines.

Did the maneuver to obtain observer nation status, which put the Palestinian Authority on a collision course with the Obama administration, really advance the Palestinians’ standing as a nation? Did it improve the economic situation of the people in the West Bank and bring the Palestinian Authority any closer to becoming a viable state? Not at all. Now, one year later, Abu Mazen told his UN audience that the Israelis and Palestinians are engaged in a dialogue, but he also cast doubt on whether this dialogue would lead to any real achievements.

“This is the last chance to achieve a just peace,” said the chairman of the Palestinian Authority. "We refuse to enter the dizzying exhilaration of interim agreements that become permanent.” That is Abu Mazen’s main mistake. Given the current state of the Middle East, it is impossible to speak in terms of a permanent agreement, and it is implausible that the alternative would be the complete breakdown of the talks.

This may be the time to stop celebrating the renewal of the talks between Justice Minister Tzipi Livni, responsible for negotiations, and Palestinian negotiator Saeb Erekat and to reassess the current reality, based on what we have learned over the past two months. Prime Minister Benjamin Netanyahu hasn’t met with Abu Mazen since the talks began, not even for a brief conversation or some general statement of intent. Despite a few symbolic gestures like the release of Palestinian prisoners and the enormous optimism that US Secretary of State John Kerry showers all around him, there seems to have been no real progress in the negotiations.

One Israeli source who is very involved in the talks told me this week that the discussions are still focused on procedural matters, and not a single professional committee has been created to offer practical suggestions or make significant preparative work in the transition from principle to pragmatics. Five people, one of whom is the American envoy Martin Indyk, cannot resolve the Palestinian-Israeli conflict and bring the results before the people in a referendum as promised. Even they do not believe that the nine-month time frame that John Kerry allotted to the talks will lead to any results.

There are plenty of issues that must be resolved before a permanent agreement can be reached, but both Israel and the Palestinian Authority lack the brave leadership needed to make the truly difficult decisions necessary. The “two-state solution” is an outstanding formula, the only formula which can lead to a peace agreement, but it cannot be achieved through leisurely meetings between Livni and Erekat once or twice a week. It cannot be reached as long as the Netanyahu government depends on a right-wing majority that could crumble if even a single illegal outpost is evacuated.

Considering all of the above, Abu Mazen would do well not to reject every offer for an interim agreement in advance. Some compromise could be found, and a timeframe for the transition to a permanent agreement could be set. That was how the Oslo Accords were built, until 2000, when former Prime Minister Ehud Barak decided to disturb the delicate balance of the agreement and pressured chairman of the Palestinian Authority Yasser Arafat to come to the Camp David Conference so that they could reach a permanent agreement. The conference ended in failure. The second intifada erupted two months later.

An interim agreement is exactly what its name implies: It is one more step forward toward the final goal. It defines a target and prevents any moves that could thwart efforts to implement a two-state solution. An interim formula should, for instance, determine what will happen with the settlements and large settlement blocs both now and in the future, and include an Israeli commitment not to establish any more "facts on the ground." An interim agreement could include a decision to evacuate illegal outposts, increase the Palestinian Authority's economic independence, establish an airport there, and transfer additional territory from Israeli to Palestinian control.

So why would Abu Mazen reject this tool up front, especially if it could restore trust between the parties and prevent another outburst of violence or even a third intifada? An interim agreement is not a bad thing if it necessarily leads to a permanent agreement. It demands doing, as the most logical next step, and should be adopted by the Arab League, so that it can assist Abu Mazen in embracing it. There is no way that a few months would suffice to resolve a conflict in which the parties must agree on borders and security arrangements, the mass evacuation of settlements, the fate of millions of refugees, and of course, on the question of sovereignty over Jerusalem.

On the other hand, setting a five-year track, or even a 10-year track for that matter, with active American patronage and the backing of the Arab League, could be a recipe for success. While it may not be an ideal solution, given the current political situation in Israel and the Palestinian Authority, it is the only viable option. As Abu Mazen flies back from New York to Ramallah, maybe someone should whisper in his ear that any sense of dizziness in the region would not be the result of an interim agreement, but of the failure of the talks.