The release of Palestinian prisoners has been diverted from a trust-building measure to a decisive issue for the negotiations' advancement and for the credibility of Palestinian President Mahmoud Abbas vis-a-vis his people. 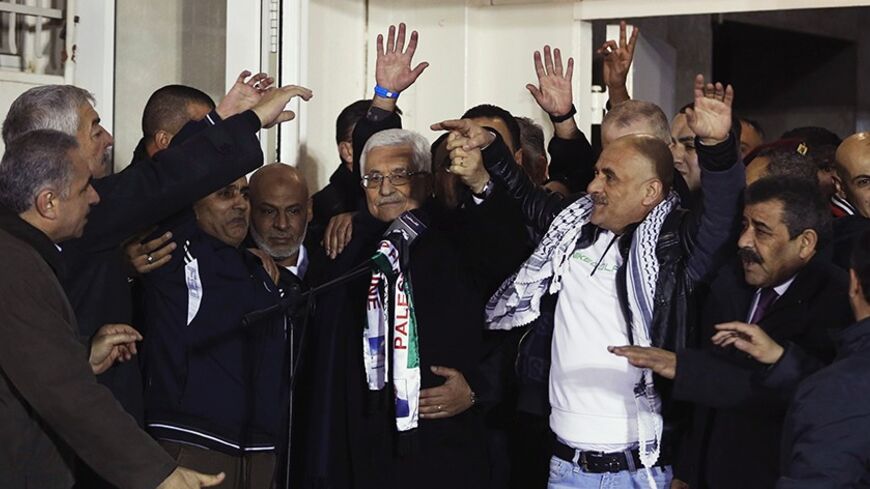 The 104 Palestinian prisoners who Israel committed to release in the course of the diplomatic negotiations represent only 10% of the number of prisoners released by Israel to Hamas in the Gilad Shalit deal. About 2½ years ago, in 2011, Prime Minister Benjamin Netanyahu agreed to release more than a thousand security prisoners in exchange for the return of the abducted soldier. But the public criticism at the time was far from the harsh reactions provoked by the current release of a tenth of that number to restore Palestinian President Mahmoud Abbas' standing and honor in Palestinian public opinion.

The reason for the criticism is clear. The release of a thousand prisoners into Hamas' hands was viewed in Israel as a necessary, no-alternative step to bring Shalit home, while the release of 104 prisoners, in exchange for Palestinian agreement to hold talks with us, is not viewed even as a default. In effect, the decision to release "heavyweight prisoners," including those condemned to life sentences — counterbalancing the heavyweight Hamas prisoners released in the Shalit deal — not only became the key issue of the talks, but even the main bone of contention threatening to blow up the negotiations.

This week, I spoke to several Palestinians about how the current controversy developed, leading both sides to a deep crisis. They swore to me that despite that the prisoner-release issue was a very sensitive, loaded subject, they never imagined it would overshadow all the core issues of the Israeli-Palestinian conflict. In other words, what was intended to create a positive, productive atmosphere in the negotiations with the Israelis, instead became a stumbling block.

The power struggles and "who blinks first" games conducted by the sides make for a fascinating lesson on how dynamics develop into a booby-trap.

As was well-known, Netanyahu refused to freeze construction in the settlements, thus a prisoner release became the default option. When the decision was made, Israel wanted to use it as a carrot-and-stick method. “They’ll give, they’ll receive” was a phrase coined by Netanyahu in the course of his first term in the premiership, while conducting negotiations with the Palestinians after the Yitzhak Rabin-Shimon Peres era. “They’ll give, they’ll receive,” repeated Netanyahu, to threaten late Palestinian Authority (PA) Chairman Yasser Arafat that the 1997 Hebron Agreement — in which Israel committed itself to redeployment of its forces in the city — would only be carried out if the PAcould prove that it was fighting Hamas terror.

At the time, Netanyahu used to explain that the Palestinians must be taught that they would not receive anything easily just because an agreement was signed. We must admit there was logic to this stance. The continued implementation of the Oslo Accord, the establishment of PA institutions in the territories and the redeployment of Israeli forces in the territories could not continue as usual, when murderous terrorist attacks were simultaneously carried out in Israeli cities by suicide bombers.

But the “give-receive” method, while self-evident two decades ago and under different circumstances, emerges as an erroneous tactic this time. This tactic not only entraps Abbas, but Netanyahu himself.

The decision to split the release of the 104 prisoners into four stages in the course of the months of negotiations was intended to signal to Abbas and his team that additional prisoners would be released only in case of progress in the talks. However, we see in retrospect that each stage became a minefield. The materialization of each additional prisoner-release stage in the deal aroused even greater public censure. The process designed to build trust became a two-edged sword. The confidence-building steps created a deep credibility crisis.

Israel has already released three-quarters of the prisoners it committed itself to, without any connection to progress in the talks. The talks now remain stuck and address only one issue: the prisoner release.

The dynamic on the Palestinian side regarding this issue is even more interesting. The prisoner release, and not opposition to continued building in the settlements, became Abbas’ main source of power in Palestinian public opinion and in Fatah. Thus, in the absence of any other achievement after almost nine months of negotiations, Abbas is forced to cling to the prisoner-release issue as a matter of a primordial principle.

Abbas, who spoke against the “armed intifada” in the course of the second intifada (which he felt was a bad deal), suddenly found himself the savior of the same individuals who generated that intifada and are now imprisoned in Israel. Thus, the prisoner-release issue became a key topic not only around the negotiating table but also on the Palestinian street.

According to the nongovernmental organization B’Tselem, about 4,880 Palestinian prisoners and detainees are incarcerated in the Israeli prison system as of January 2014. Since negotiations began in July 2013, the families of prisoners have exerted heavy pressure on the PA and Fatah activists for the release of their relatives. Abbas suddenly found his political life hanging by a thread on one issue: whether he would succeed in freeing the prisoners, or whether he would fail and become a laughingstock.

This is why Abbas swears to everyone that no peace treaty with Israel will ever be signed until the last Palestinian prisoner is released from Israeli incarceration. Suddenly, Netanyahu’s slogan of 18 years ago — “They’ll give, they’ll receive; they won’t give, they won’t receive” — has taken on a new, double-edged meaning.