It's the Egyptian Identity, Stupid

The first Egyptian revolution was about freedom, justice and dignity, but the new wave of protests is about defending Egyptian identity. 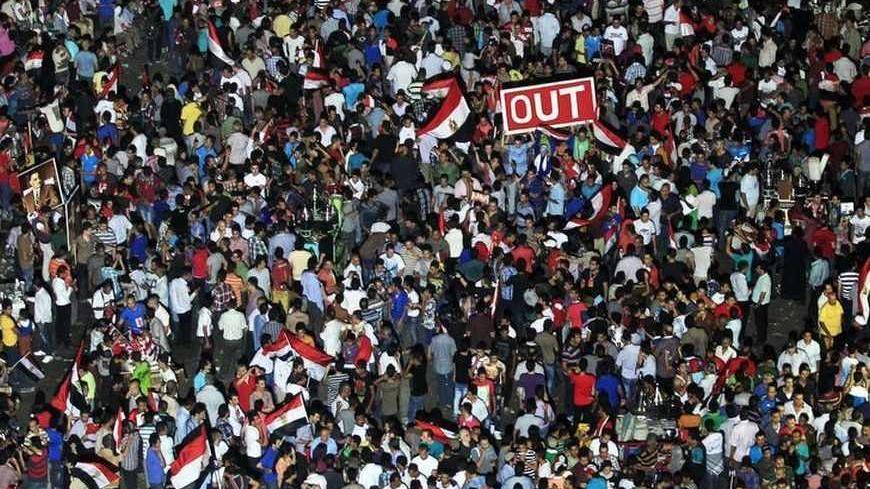 Observers are shocked. They do not understand as they watch millions of Egyptians marching in protest, in every major city in Egypt, against President Mohammed Morsi. In Cairo alone, some estimated the number of protesters to be 5 to 7 million. That is roughly a quarter to a third of the capital’s population. The crowds on June 30 may have been part of the largest political protest in history.

Political analysts are baffled. Egyptians put up with the fraudulently elected Mubarak for 30 years, but now seek the departure of the democratically elected Morsi after only one year? Did they expect the man to have a magic wand that would allow him to solve all of Egypt's economic problems with a single stroke?

It's not the economy, stupid. It is not just about the fuel shortages, power outages, deteriorating economy or soaring prices. Western media rarely, if ever, mention the Muslim Brotherhood's assault on Egyptian identity, culture and way of life as a core cause of protests. Could something so intangible motivate such massive demonstrations?

The reality is that culture is much more tangible than one may think at first glance. Restrictive cultural policies affect education, art, newspapers, television programs, books, academia, laws, dress, food and beverages, sports, management of antiquities and cultural heritage, tourism and public holidays. These are tangible things that impact people’s daily lives. When experiencing an abrupt change in aspects related to their self-image or the way their children are being brought up, people may panic and react quite strongly. Egypt might be experiencing one of these instances more than anything else.

Attempts by the Muslim Brotherhood to convert Egyptians to their conservative values did not start just last year. Funded for several decades by generous donations from Wahhabi sheikhs, the Salafis and Muslim Brothers slowly began to infiltrate Egyptian society and gradually succeeded in making Egypt visibly different, first by calling for small things, like asking women to wear the hijab and putting their preachers in control of key mosques, and then by expanding to launch a network of charities with a political agenda — preparing Egyptian society for Islamist rule.

The Muslim Brothers was banned before the 1952 revolution because of their involvement in political assassinations and after the revolution were prosecuted by the regime of Gamal Abdel Nasser after an attempt on his life. Nasser's successor, Anwar Sadat, decided to allow Islamist organizations to regroup to counterbalance socialist and Nasserist political streams in the 1970s. Sadat was assassinated in 1981 at the hands of Islamist extremists. Near the end of Mubarak’s rule, he offered large concessions to the Brothers to create a bipolar political system in which the only alternative to his ruling National Democratic Party would be the Muslim Brotherhood. After the 2011 revolution, the Brothers decided that this was their time. They had to seize the moment before it was gone.

Morsi was elected president of an ancient nation with an established way of life — in fact, one that Hassan al-Banna, founder of the Brotherhood, detested and considered immoral. Sixty-five years after Banna's death, Morsi, obedient member and leader of the Brotherhood, runs for the presidency of Egypt. As soon as he assumes office, he gets busy appointing his “Brothers” to key government positions as part of the so-called Tamkeen plan, a plot to control Egypt that is said to have been drafted by Khairat al-Shater himself.

The plan, which the opposition refers to as Akhwwana, or Brotherhoodization, requires that only officials loyal to the Brotherhood ideology be appointed to key government posts, among them the portofolios for education, media, religious affairs, social affairs and culture. The reason is simple: If Egyptians are taught to think like the Brothers, it will ensure a lengthy reign for the organization, which could then win elections before they were even held.

Of course Egyptians are angry over prices, fuel shortages and electricity outages, and these problems have amplified the cause of rebellion. But Egypt is a nation that has patiently coped with shortages for decades. What has made people especially angry now is the sense of losing Egypt’s distinctive way of life.

For starters, the constitution passed by an Islamist majority codified ultra-conservative restrictions on freedom of faith and expression, using terms that in effect could penalize people who do not allegedly comply with “social values,” meaning, more or less, whatever values the government and its allies deem fit. Education experts warned that newly appointed Brothers at the Ministry of Education were changing curricula to conform to the Muslim Brotherhood's conservative ideology. The Brothers also removed chapters from history books describing their organization’s violent past. When Minister of Culture Alaa Abdel Aziz fired a number of high-profile officials and was rumored to be considering a ban on ballet, artists and performers staged a sit-in and held several ballet performances in the street, including “Zorba the Greek.”

Emotions and feelings play an important role in how people make decisions, which are not just based on rational calculations. Rather, feelings and emotions use complex calculations that occur at the level of deeply rooted instincts for survival. Many emotional factors have contributed to making Egyptians sense a threat to the survival of Egypt as a nation.

Many Egyptians feel that Morsi is more of an obedient member to the Muslim Brotherhood than he is a president whose loyalty to his country and its people comes first. Morsi stopped military campaigns designed to cleanse the Sinai of al-Qaeda elements and other jihadist militants. At pro-Morsi demonstrations, al-Qaeda flags rather than Egyptian one are waved; chants for Osama Bin Laden can be heard. Egyptians have now seen terrorists, arguably former terrorists, rise to the highest seats of power and then appear on television and threaten them with blood and wrath if they protest to challenge Morsi’s legitimacy.

Five Egyptian Shiites were killed in Giza a few days after Morsi gathered his Islamist “clan” in a stadium on June 15 and Egyptians watched with horror as former terrorists delivered speeches full of hate toward Shiites and issued a declaration of jihad and war against Syria. Morsi’s divisive constitution and policies have made too many people feel that he does not care about the unity of the Egyptian people or the integrity of the state. His handling of the Renaissance Dam crisis vis-à-vis Ethiopia was pathetic. The Nile is not just a pretty river where pretty scenic photos can be taken. The Nile is the lifeblood of Egypt.

The ideology of the Muslim Brotherhood does not acknowledge the concept of the nation-state and calls instead for a monolithic Islamic nation that ignores national borders. Hence Egyptians have reacted with feelings of fear brought on by a credible threat to their survival as a nation and as a state. So perhaps for the first time in history, a revolution erupts because people want to defend their culture and way of life. If the January 25 revolution was about freedom, justice and dignity, the protests of June 30 were about Egyptians salvaging their Egyptian identity.

Wael Nawara is an Egyptian writer and activist. He is also the co-founder of Al Dostor Party, the National Association for Change and El Ghad Party. Formerly president of the Arab Alliance for Freedom and Democracy, he was a visiting fellow at the Institute of Politics, Kennedy School of Government, Harvard University. On Twitter: @WaelNawara