Dancing Among the Dead in Egypt

Are Egyptians adjusting to the violence? 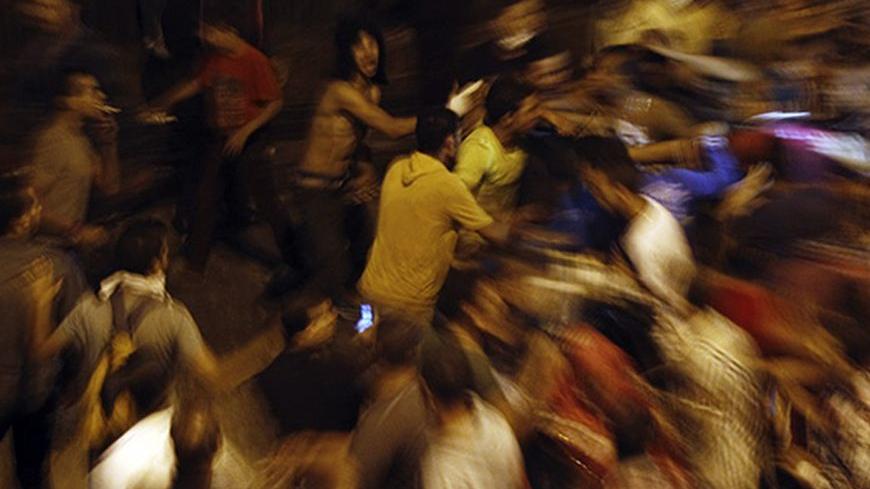 Anti-Morsi protesters clash with members of the Muslim Brotherhood at Ramsis square, which leads to Tahrir Square, during a celebration marking Egypt's 1973 war with Israel, in Cairo, Oct. 6, 2013. - REUTERS/Amr Abdallah Dalsh

Egypt’s Ministry of Health reported at least 51 dead and 268 injured in Oct. 6 clashes and street battles between rallies of Morsi supporters, residents of the neighborhoods these rallies passed through and police. You could say celebrations of “Victory Day” have turned sour in Egypt. Except that they didn’t. Celebrations went on as if nothing was happening. As if no one were even injured.

There are two parallel worlds bloodily coexisting now in Egypt: The world of the Brotherhood, where Morsi’s reinstatement is an uncompromising goal and where Gen. Abdel Fattah al-Sisi is the leader of a bloody coup, and the other world of the rest of Egyptians, where al-Sisi is a hero and the Brothers are traitors, an occupation force which has been ousted by their savior, who is liberating Sinai and the rest of the country from terrorists. There is little common ground between these two parties. So, while one party celebrates with music, bands and dancing, the other buries its dead and prepares for the next wave of protests to “break up the coup.”

In Al Masry Al Youm, Egypt’s leading independent daily, the headline on Monday, Oct. 7, read: “The People Celebrate while the Brothers Incapacitate.” State and independent television talk-show hosts put all the blame on the Brotherhood and compared their ouster on July 3 with the liberation of Sinai following the celebrated 1973 October War.

Morsi was reported to have become depressed on learning that his supporters failed to occupy Tahrir and other major squares as planned. Former Field Marshal Mohamed Hussein Tantawi, former chief of the Supreme Council of the Armed Forces, and Gehan Sadat, widow of Anwar Sadat, president of Egypt during the October War, who was assassinated by Islamists in 1981 following his peace treaty with Israel, attended army celebrations where an operetta was performed by a host of artists showing their support to the military.

Al-Sisi gave an unrehearsed speech where he emotionally engaged Egyptians on several levels. He assured them of the army’s resolve and that it is as “strong and as unbreakable as the pyramid because the great Egyptian people are on its side.” He recalled the defeat of 1967 and how Egyptians physically and morally supported the army at times of great distress, sacrificing from their food while accepting rations and queues to spare resources to rebuild the country’s broken fighting capabilities. For this, he said, the army will forever remain grateful and indebted to Egypt’s great people. He used his popularity in asking Egyptians to work hard and be patient, “because for Egypt to become great again we must all pay a price.” He also honored Arab support to Egypt both during the 1973 war and in Egypt’s current situation and prayed for “Arab unity.”

But the question remains, how did 51 people, almost all in Cairo, die on one day, the highest corpse count since Aug. 16? And why is the Muslim Brotherhood sending its supporters to these bloody battles? Will things continue like this for long?

Tarik Salama, a liberal activist, wonders what has happened to Egyptians and remembers that the Jan. 25 revolution erupted because one person, Khaled Saeed, had been beaten to death by the police. Now, 51 Egyptians die in one day yet people talk about the weather.

Several leftist activists and Jan. 25 revolutionaries blamed security for using excessive force, while military supporters insist that the deaths happened because pro-Morsi rallies included protesters armed with knives, guns and even automatic rifles which made residents of various neighborhoods stand up to them. According to their stories, most casualties ocurred as a result of street fights while security forces mostly used tear gas to disperse the clashes and contain the situation. The Brotherhood, on the other hand, insists that they have been assaulted by armed thugs mobilized by the authorities. Residents of Cairo's Ghamra neighborhood said Morsi supporters moving through their district fired at them.

Why does it have to be like this? Why does the Brotherhood send its supporters in protests which demean the army on a day where Egyptians assemble to honor the very same army, knowing that the result will be violent clashes and death? Has the group gone madly suicidal? But even if that were true, couldn’t the authorities act as the sane party and enforce buffers between pro- and anti-Morsi camps to prevent these deadly clashes?

With these deep divisions, some analysts believe that Egypt is experiencing a low-intensity civil war. Others dispute the idea because of the homogeneity of Egypt’s population and the overwhelming majority supporting the state and the military which prevents a real civil war from taking place. Regardless of its classification, the consequences of the conflict on Egypt’s economic recovery will be undoubtedly negative, especially as tourism will continue to suffer. Several countries had scarcely lifted a travel ban to Egypt only a week ago, which seemed to trigger the Brotherhood to induce yet more deadly clashes once again. Their advertised plan is an attrition war, hoping to send Egypt into bankruptcy.

But actions always invite reactions. In response to the death of dozens, several attacks took place within hours of sunset. An army checkpoint was attacked with an RPG in Remaya Square, Giza. Another RPG missile targeted a giant satellite communications receiver in Maadi. A huge suicidal explosion shocked police headquarters of Southern Sinai. Were these immediate responses spontaneous or planned? Were they carried out by members of any organized group or mere supporters who are loosely associated with the cause? The government also reacted, with news that the Freedom and Justice Party, the Muslim Brotherhood’s “political arm” could be legally dissolved after the Administrative Court’s State Commissioners’ issued a report recommending its disbandment.

As the Muslim Brotherhood rejects dialogue or compromise before Morsi’s reinstatement, these clashes will recur and more deaths will take place. Egyptians, at least for now, seem to have adjusted their psyches to accept this intermittent bloody reality. Life goes on as the death count becomes a relative measure to judge how bad the day has been.

Wael Nawara is a columnist for Al-Monitor Egypt Pulse. He is an Egyptian writer and activist. He is also the co-founder of Al Dostor Party, the National Association for Change and El Ghad Party. Formerly president of  the Arab Alliance for Freedom and Democracy, he was a visiting fellow at the Institute of Politics, Kennedy School of Government, Harvard University. On Twitter: @WaelNawara