Egyptian Police on Fence In Confrontation With Morsi

Egypt’s security forces will be decisive in the present crisis. 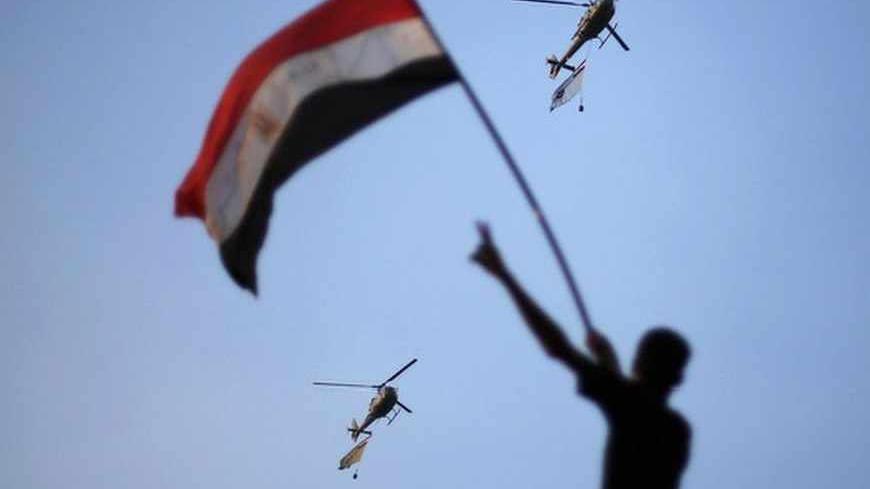 CAIRO — Only a day after the June 30 protests, the army gave President Mohammed Morsi a 48-hour ultimatum to “listen to the will of the people,” after which the army will take it upon itself to announce a road map to a solution. For many Egyptians, the July 1 statement was a sign that Morsi’s house of cards is falling as the army reasserts its role as Egypt’s safeguarder. However, in a followup statement a few hours later, allegedly after a meeting with Morsi, the army rejected media claims of a military coup, denying any interest in ruling the country or overstepping its bounds.

In a curious twist to previous protests, police in uniform and civilian clothing were seen participating in and supporting anti-Morsi demonstrators throughout the country on June 30 and yesterday, July 1. The Ministry of Interior had announced on June 10 that police forces would not be present in the protest areas. True to their word, police presence was minimal in key anti-Morsi demonstration gatherings as well as at pro-Morsi Rabea al-Adaweya Mosque. The bottom line for Morsi is that the security forces do not stand with him, leaving him in quite a predicament. Set to address the country yesterday from the Qobba presidential palace, the destination of Tamarod protesters in today’s demonstrations, he instead cancelled. Without the enforcing mechanisms of the state behind it, Morsi’s regime has little left to stand on.

Morsi made a last attempt at both flattering and warning the security forces of who they answer to, but dissent against Morsi is too potent, too widespread and too irrepressible for also disgruntled security forces to look the other way. In his June 27 speech, Morsi showered the army with praise and appreciation for their role in protecting the country and the revolution. He also reminded them that he, the president, is supreme commander of the armed forces, while blaming invisible forces intent on causing discord between the two. Though less lavish, the police received sympathetic and encouraging words promising the government would do its part to build state institutions so they could do their jobs. The speech was a futile effort to placate security forces as well as remind them of their constitutional obligation to the executive office.

The army’s declaration has prompted a widespread show of support with the streets of Cairo filled with honking cars proudly waving flags from their windows and a hopeful, roaring crowd in Tahrir on July 1. In a public-relations stunt that started on June 30, army helicopters continue to pass over Tahrir and Ittihadiya presidential palace, dropping flags to cheering crowds as well as displaying dangling flags.

Nevertheless, some Egyptians are skeptical of the military’s announcement repeatedly reminding their compatriots that a military coup is not revolutionary, but the public remains jubilant — an unsurprising sentiment after a year of economic mismanagement and political incompetence throwing the country into turmoil.

Some of the skeptics reluctantly hope that if the military does take over, army rule under the control of General Abdel Fatah Khalil al-Sisi will prove significantly different from that of General Mohamed Husein Tantawi, the head of the Supreme Council of Armed Forces. Witnessing the army’s unceremonious stepping down from power by a country fed up with them, General Sisi has been much more cautious to get involved in politics, repeatedly calling on political factions to come to an agreement. Regardless, the next force to rule Egypt will face a huge uphill battle in dealing with Egypt’s economic and political crises, although the hope is that whoever is to come will be able to handle it with transparency and competence.

In a statement following the army’s, the Ministry of Interior affirmed that they will ensure the safety of protesters and supported the army’s earlier statement. The ministry went on to express its political neutrality, maintaining its distance from all political sides.

Speaking from Cairo, Khalil al-Anani, a scholar of Middle East politics at Durham University focusing on the Muslim Brotherhood, believes that the police learned from the 2011 revolution and are now “trying to improve their image and get the support of the people.” He thinks that they are also concerned about how they will fare in the post-June 30 scenario, possibly facing a serious backlash.

The police support of protesters has proven hard to swallow for some Egyptians. While they are glad that the police do not pose an obstacle to do battle with during these demonstrations, it is difficult to forget the plethora of abuses by one of Egypt’s most vilified institutions that defended deposed president Hosni Mubarak until the bitter end. This time, however, the police have not attacked protesters.

The police and the Brotherhood have had an uncomfortable relationship since the latter came to power. The police are responsible for the arrest, brutal torture,and repression of the Muslim Brotherhood over decades, and have always viewed their new masters with a combination of suspicion and dislike. Morsi tried to appease the Ministry of Interior by avoiding the revolution’s demands for police reform, but this has not been enough to quell tensions.

In March, policemen across the country protested against Egypt's interior minister, who is viewed as a Brotherhood supporter, demanding better equipment to protect them at protests. Since the violence around the Jan. 25 anniversary of the revolution and ruling on the Port Said soccer match, police, with increasingly low morale, have resented being used to defend against aggressive protesters.

While the police force’s current disengagement from the ruling regime may be a positive turn, preventing bloodshed between security forces and the people, there is fear that the violence between pro- and anti-Morsi protesters may be even worse, as there will be no one to act as a buffer between the two sides unless the military descends to the streets.

According to Al-Anani, who spoke to Al-Monitor via telephone, “The police will not defend the Muslim Brotherhood, which knows the police is colluding against them. If the Brotherhood are wise, they will find an exit for themselves.” He added that if security were to break down and retaliation against the Brotherhood were to ensue, they know that they could not count on the police to protect them.

While the idea of Brotherhood militias organizing might be a stretch, Al-Anani does think that there are young Muslim Brothers who are ideologically committed enough to the organization and the Islamist project that they will lay down their lives to defend it.

Previously, the police attacked the people instead of protecting them. Now, even though the police are not fighting the people, depending on how political and security forces handle themselves today with Islamists and anti-Morsi protesters calling for huge rallies, the next few days in Egypt may turn from peaceful to bloody, with violence targeting the Brotherhood. The Brotherhood’s supporters, who have manned their rallies with crude homemade weapons, are not likely to back down without a fight.